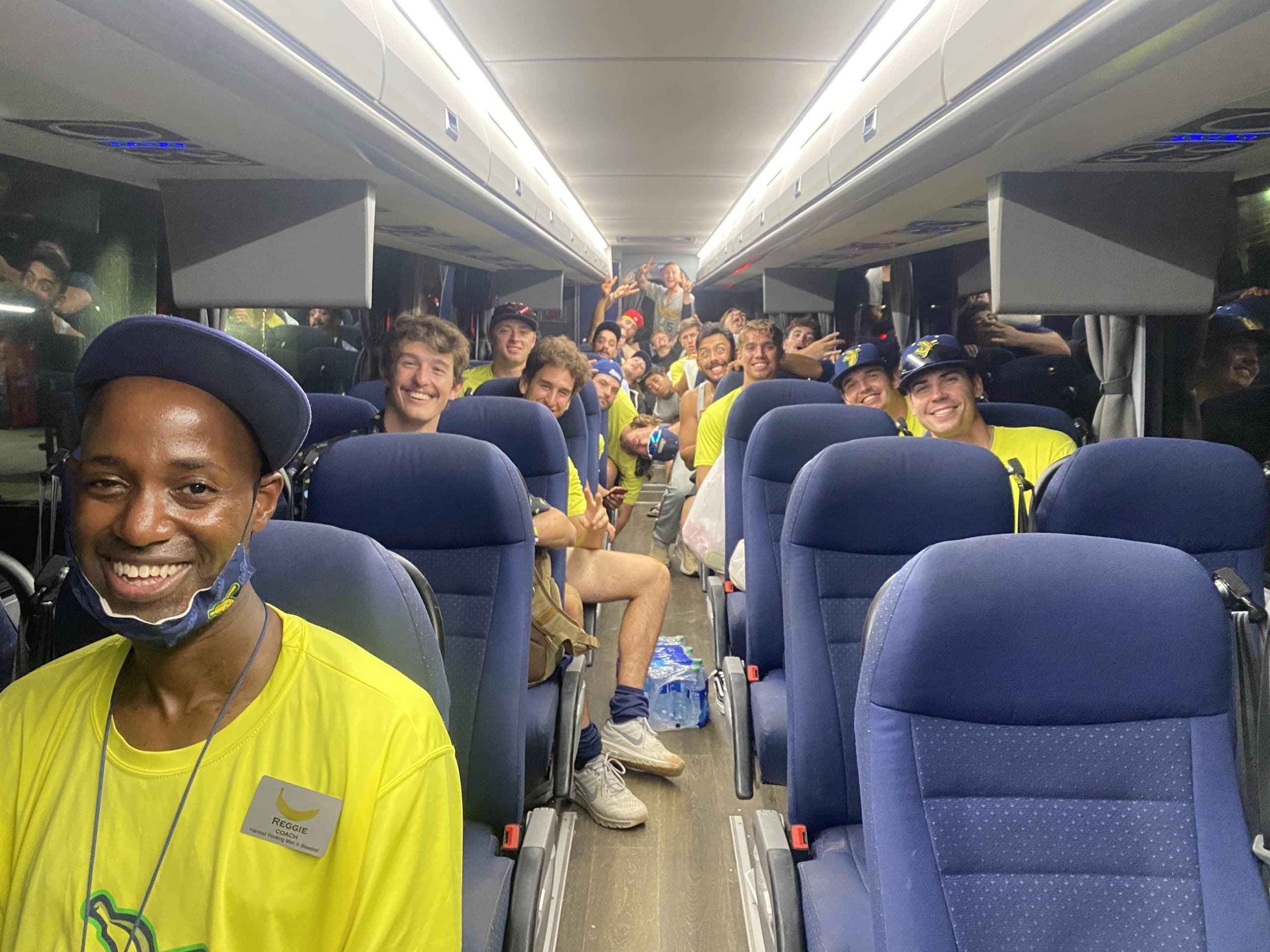 The Nanners won a heck of a ballgame in Macon with a two-run top of the ninth inning to take down the Bacon for the eleventh time in twelve games this summer. Superb pitching, stellar defense, and timely hits were all needed in the 4-2 victory for Savannah.

It all started with the best pregame speech of the summer from Reginald, Gotta Throw Bark Bark Out the Window, Horton, who fired up the guys with an impassioned performance on the bus as we rolled into Luther Williams Field. Reggie’s powerful words inspired Drew, Every At-Bat Needs to be My First At-Bat, Yniesta, who laced a leadoff double off the wall in left-center. Armando, Ice in His Veins, Becerra, lined a single to left and Jack, The Spartanburg Stallion, Renwick, bounced a single up the middle to score Drew, putting the Bananas ahead three batters into the game. In the bottom half, Josh, Balls Hit Less Than 75mph Shouldn’t Count as Hits, Willits, gave up two bloop singles to start out his night, one at 68mph off the bat and then other at 73mph. A walk and then a controversial 3-2 call for another free pass would push home a run to tie the game for Macon. They would take the lead on a passed ball but Willits would register back-to-back strikeouts with two men in scoring position to escape the inning with just two runs coming home.

After the passed ball, Josh would retire ten straight Bacon hitters before walking one more man and then getting a groundout to finish four innings with just one earned run, the two bloop hits, and three walks while picking up five strikeouts. Sam, Harry Houdini, Replogle, was able to escape jams in the second and third innings before throwing a 1-2-3 fourth to end his evening for Macon.

Austin, Ricky Vaughn, Emener, walked Danny, Ashton, Gutcher, got Drew to bounce into a fielder’s choice, and then walked Mando. A passed ball advanced Yniesta and Becerra and then a sac fly from Renwick brought home Stainer to tie the game at 2-2. In the bottom half of the fifth, Hunter, The Angel in the Outfield, Entsminger, worked around a walk, a bloop single hit 68mph, and a plunked batter by striking out the other three hitters he faced to strand the bases loaded.

Emener settled in after the shaky top of the fifth inning, retiring six of the seven hitters he faced in the sixth and seventh innings, only allowing a two-out double in the sixth to David, The Doctor is in, Meadows, which was his first hit as a Banana. Entsminger had a much more enjoyable second inning of work, with just one man reaching on an error while he struck out two more. The top of the seventh started walk, incredible play at shortstop by Renwick to get an out at first, and then another walk. That would end Hunter’s evening, as he went 2.1 innings, walking three, hitting one batter, giving up one dinky base hit, and striking out five. With runners on the corners and one out, Tyler, Are You Talking to Me?!, Gillum, and Corey, She’s My Cherry, Pye, went to their stellar third-year Banana, Nolan, Hope You’re Not Scared to be Stranded, Daniel. It took three pitches for No-No to strikeout Davis, Old, Heller, and just one to get Kyle, It Would be Perfect if His Last Name was Pork, Bork, to pop out to second to end the threat.

Hunter, What’s That Barn do Doh, Varnadoe, came in for the eighth and gave up a leadoff single to Beau, I’m a Lover Not a Fighter, Brewer. After a pair of fielder’s choices, Brody, I Personally Wholeheartedly Disagree, Wortham, was thrown out trying to steal second on an incredibly questionable call. Nolan gave up a line-drive single down the rightfield line to start off the bottom of the eighth but Yniesta gunned down Jake, Rookie Mistake, Larson, who tried to stretch it into a double. Daniel was able to strand a two-out two-bagger on second base and send the game locked at two runs apiece into the ninth.

Leading off the top of the ninth inning, Bryce, The Macon Mutilator, Madron, tattooed a 3-2 fastball 380 feet out to right field to give the Nanners their first lead since the first inning…

A wild one on the whiteboard tonight! Here are the three plays in the ninth inning that secured a 4-2 win for the Bananas:

It all started with a go-ahead birthday blast from Bryce Madron! pic.twitter.com/EvpNmHgx1W

Hitting his first home run as a Banana to break a tied game in the ninth inning seems like a decent way to celebrate your 21st birthday to me. Meadows followed the dinger up with a loopy liner into right-center for a single and then stole second base. With D.R. at third and two down in the inning, Armando slapped a two-strike slider back up the middle for a much needed insurance run, doubling the Nanners lead to 4-2…

Then with 2 outs and 2 strikes on Armando Becerra, he continues to show why he’s a LOCK to start in the CPL All-Star Game pic.twitter.com/KQL8qF39jw

Jestin, Starting, Long Relief, Closing a Game, Man it’s all the Same, Jones, gave up a double to Jack, The Mailman, Malone, to start the bottom of the ninth. After notching a huge K and inducing a can of corn to left, Jestin faced pinch hitter Bryce, I’ve Been Waiting on My Moment, Matthews, who blasted a ball to right-center…

Now in the bottom of the ninth, with 2 outs and the tying run at the plate, Armando makes an incredible running catch just before smashing into the wall to end the game pic.twitter.com/EgHlRTqg38

Dude just does it all. What a pleasure it has been to watch Mando continue to come up over and over again in the clutch while putting up some of the best hitting numbers in the league and tracking down anything and everything in the outfield. The guy’s a special talent.

What a big win for the Bananas. A hard fought affair from start to finish and they come away with the victory because they executed in all aspects of this ballgame. Drew and Jack combined powers to produce the first two runs and then Bryce, D.R. and Armando take care of business in the ninth. All the while through each Nanners pitcher was terrific, from Willits, to Entsminger, to Daniel, to Jones. Nolan gets a well deserved third win while Jestin locks down his first save of the summer.

The fellas return to Grayson for a Saturday night battle with the reeling Lexington County Blowfish who have lost nine straight, two of which were to the Bananas. The pregame show will get going at 6:30pm eastern and first pitch will be thrown at 7:00, with the broadcast as always going live on Bananas Insiders.

Anddddd somehow the folks on the interwebs have gotten a hold of video from the slight kerfuffle from a couple nights ago as well. Although we obviously do not want such things to happen and I doubt it will happen again, as that’s the first time I’ve seen such a thing in three years in Savannah, it has been quite funny seeing most people online thinking that everyone was just going to breakout into a synchronized dance or that the whole thing was staged in the first place. Makes me think that faking a benches clearing incident and turning it into a flash mob may not be a bad idea for a Banana Ball game in the future… We’ll see 😉

Alright time to wrap this up. Awesome win for the boys tonight. They play their sixth game in a row and 24th in 27 days tomorrow back at home. Let’s have some fun!