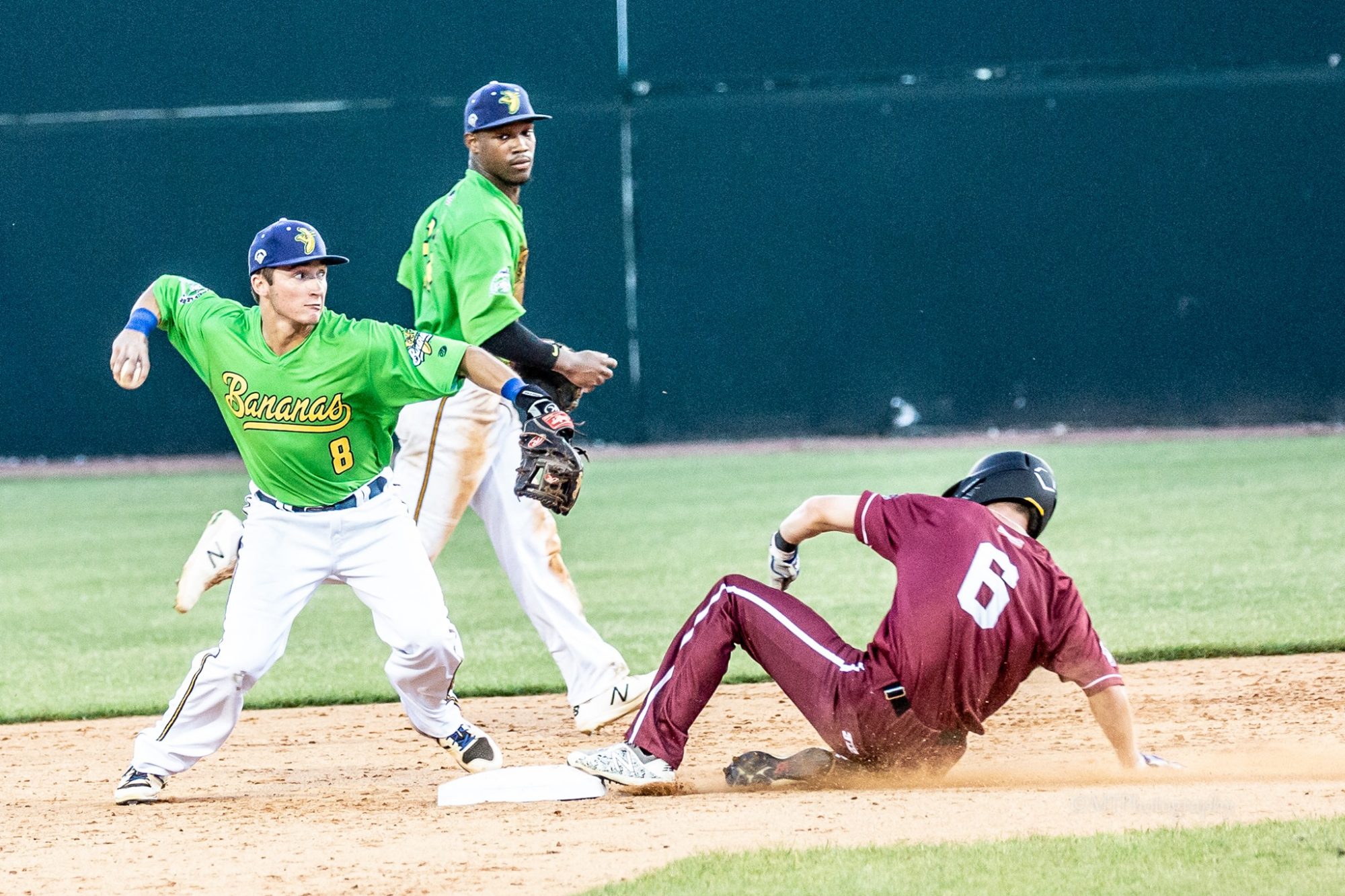 The Savannah Bananas are excited to announce the return of 8 former Bananas for the 2019 season. Two time Banana Jake Howard will be back in Savannah for his third summer joined by former teammates Jake Sullivan, Tyler Follis, Mason Miller, Cade Marlowe, Bill Leroy, Kyle Luigs, and Brayden Belden.

Jake Howard (UTL, North Georgia) is dominant on defense and reliable at the plate where he held a .357 on base percentage last summer with 15 runs scored.

“We are excited to have Jake back for his third season. He has played an important role for us each summer. He’s tough, willing to do anything, a great teammate and awesome human. Jake knows everything we do with the bananas so he’ll be a great leader for all the new faces on the team,” said Head Coach Tyler Gillum.

Jake Sullivan (UTL, University of South Florida) finished last season with 44 hits and a .336 batting average. Sullivan represented the team in the 2018 Coastal Plain League All Star game and was also selected to the Second All-CPL team.

“Jake will be a great addition to our roster and give us some flexibility. He has the ability to catch, play 1st or play third. He is hitting over .300 right now at South Florida. He spent some time in the middle of our order last summer always putting up a quality at-bat which earned him a spot on the All-star team last year.”

Standout pitcher Tyler Follis (RHP, Louisiana Tech) boasted a 2.43 ERA over 37 innings pitched. Follis was a 2018 All-Star and was selected to the second All-CPL team.

Gillum commented, “Tyler was one of the best pitchers in the league last year. We are ecstatic to have him on the pitching staff again. He is a leader type presence in the clubhouse. He knows everything we do as the Bananas and will make an positive impact on the younger pitchers.”

Cade Marlowe (OF, West Georgia) led the league last season with 37 stolen bases. Marlowe is a staple in the outfield and was named to the All-CPL team last year.

“Cade was one of the best players in the league last year. He is a guy that is going to put constant pressure on the defense and make things happen. He was the face of the “Green Light Special” last summer. He broke his schools record for stolen bases this spring. Awesome human and teammate. We are pumped to have him back,” said Gillum.

Defensive standout Mason Miller (UTL, Georgia Southern) will return this summer to Grayson Stadium. In his 20 game appearances, Miller racked up a .354 slugging percentage and 22 hits.

“Mason is going to bring the energy again this summer. He is a spark plug type of guy that can change the game with his speed. He is a tough out at the plate and will be a highlight reel in the outfield. He is one of Banana Nation’s favorite players because of his awesome acting in all of our videos last summer. I am glad Mason “wants me to coach him” again (Tytanic Reference).”

Fan favorite Bill Leroy (C, North Georgia) will return with his energy this season. Leroy batted .288 with 15 RBI and was a wall behind the plate for the Bananas last summer.

“Leroy is exactly what you look for in a Banana. He is a leader, tough, good teammate, outgoing, brings energy and a really good baseball player. He is a big reason we had a great summer last year. The ability to catch in a kilt will never be forgotten,” Gillum said.

Brayden Belden (LHP, Oklahoma State) struck out 40 in his 9 appearances and finished out the summer with a 4-2 record.

“Brayden will be awesome to have back for the summer. The experience he has starting multiple games in the coastal plains league will be huge. He will be a great addition to staff in many ways. Last year he learned how to dance so I expect some better moves this summer.”

Kyle Luigs (RHP, North Georgia) will return to the Bananas this summer after grabbing 23 K’s and a 3.63 ERA last season.

Gillum commented, “Luigs was awesome for us last summer. He was only with us half the summer but a big reason we won the first half in 2018. He has the ability to start or come out of the bullpen. His presence on and off the field will be very valuable.”

More announcements will be made about the 2019 rosters in the weeks leading up to Opening Night on May 30. Fans interested in seeing this year’s team take the field can purchase tickets at www.thesavannahbananas.com/tickets or by calling 912-712-2482. Only a limited number of games still have tickets available for this season.

The Coastal Plain League is the nation’s premier summer collegiate baseball league. Heading into its 23rd season in 2019, the CPL features 16 franchises playing in Georgia, North Carolina, South Carolina and Virginia.  To date, the CPL has had over 1,450 alumni drafted and 118 alums – including 2017 ALCS MVP, 2017 World Series champion, 2011 AL MVP and Cy Young award winner Justin Verlander, as well as 2017 NLCS MVP Chris Taylor – make their Major League debut.  For more information on the Coastal Plain League, please visit the league website at www.coastalplain.com, and be sure to follow us on Facebook, Twitter, Instagram and Snapchat @CPLBaseball.