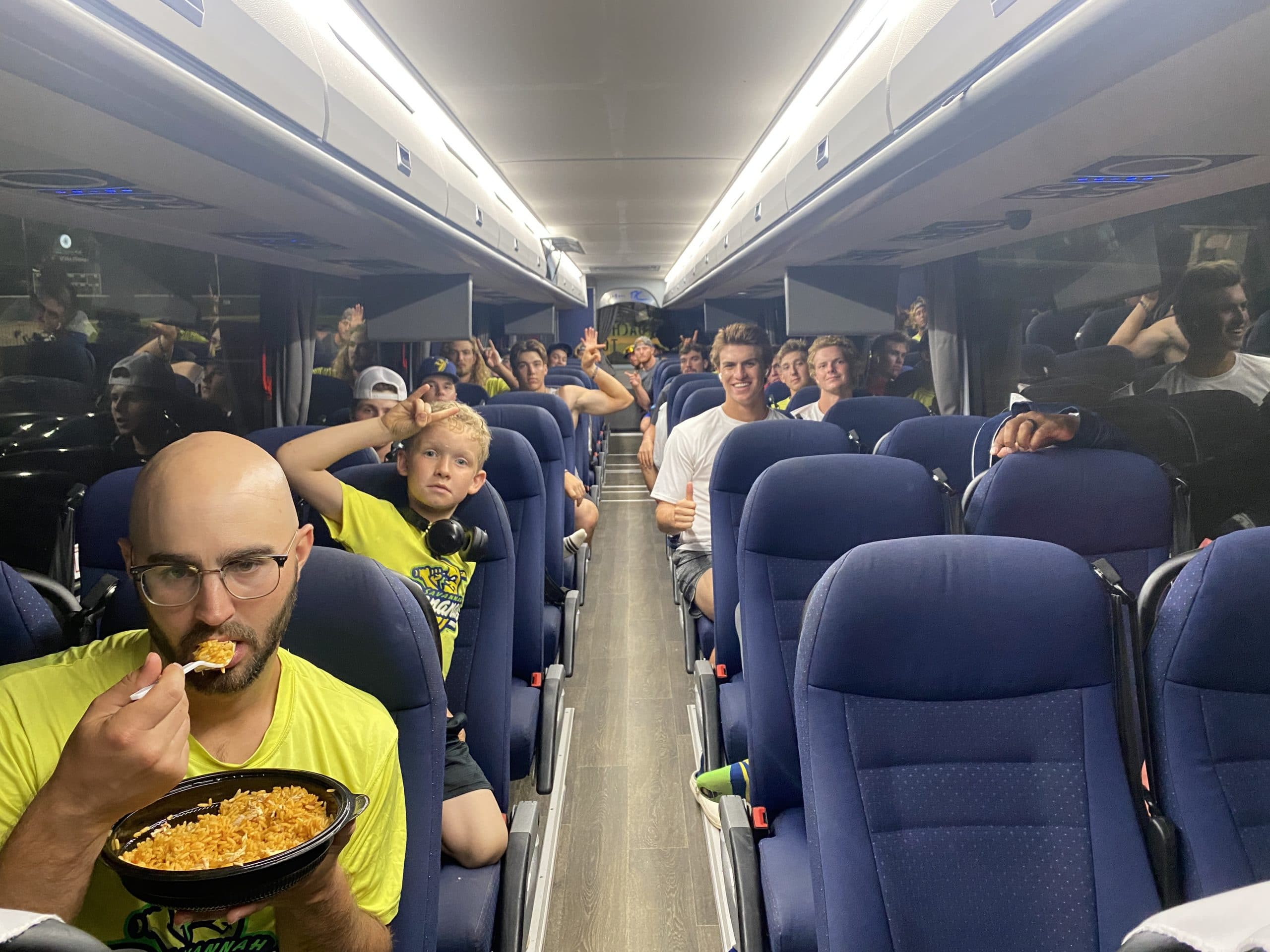 The Nanners suffered a tough loss in a game they led more than half of, as the Spartanburgers came through multiple times in the clutch to take the game 8-7.

The night started about as well as you can imagine, as Eduardo, Dame Más Arroz, Malinowski, went yabaroony to left field, tying Danny, También Me Gustaría un Poco de Arroz de Eduardo, Oberst, for the team high with 3 dingers apiece. Livan, I Just Wanted to Get to First so I Could Hang With Dayan, Reinoso, grounded a base hit through the left side and Zane, I Guess My Name is Zeus Now, Denton, lined a single to right. With 2 outs, Nick, ”Catch Me Outside, How About That?”, Clarno, shot a grounder through the right side to bring home Livan. A couple pitches later Nick took off for second and when the throw went through Zane broke for home, sliding in safely just ahead of the throw from the shortstop to make it 3-0.

Tyler, I Don’t Care What We Wear I Just Care About Our Energy, Gillum, and Corey, The Yellow and Purple Would Have Been Sick Though, Pye, turned to Tom, If You Think I Was Red From Sunburn Just Wait and See How Red I’ll Turn if Those Runs Are Earned, Vincent, on the mound. Tom gave up 2 unearned runs (they were incorrectly ruled to be earned runs, which will change when I petition said ruling), on a 2-out, 2-RBI single up the middle. Tom would end up going 2+ innings without allowing an earned run (in my book), and striking out a pair of Burgers.

Cole, It’s Just Fun to Be Involved Again, Kitchen, came in with a man on and nobody out in the 3rd and stranded Tom’s runner. He struck out his 2nd and 3rd hitters of the night in the 4th while also walking a pair and giving up an infield single to load the bases for the most dangerous man in the Spartanburg lineup, Livan’s twin brother Dayan. Christian, At Least I Don’t Have to Face Livan, Dearman, got Dayan to bounce out to Clarno at 3rd to end the threat.

Quinn, I Know a Pretty Fish When I See One, Mason, came in and threw a 1-2-3 5th inning. In the 6th, Bryson, I’ll Be Fine in the Outfield it’s Just Shagging Balls, Bloomer, grounded a ball through the left side of the infield and then Clarno flared one into right-center and the throw to 3rd went out of play, sending Bryson home and Clarno to 3rd himself. Unfortunately, back to back grounders to short couldn’t bring Nick home, and the Bananas would have to settle for a 4-2 lead going into the bottom of the 6th.

Quinn started the inning with his 3rd straight strikeout, but then the 8-hitter reached on an error and the 9-hitter and leadoff man both walked while a run came home on wild pickoff attempt at first from Mason. He did bear down to strike out Cal Bocchino, the 2nd best bat in the Burgers lineup, but then walked Dayan to load the bases. Davis, Beach Bound, Hare, gave up a 2-run single on his 1st pitch in and then a 2-run double on his 3rd pitch, and just like that the Spartanburgers were up 7-4.

The Burgers tacked on a very important insurance run in the bottom of the 8th on two singles and a double from their 2-4 Murderers’ Row and the Bananas had the tall task of mounting a 4-run comeback against Dayan in the 9th. With one out, Carson, This Will Be the 2nd Best At-Bat By a Switch Hitter This Inning, Falsken, worked a walk. Eduardo then lined a single to left on a 90mph slider (Dayan is no joke), setting up the moment we’ve all been waiting for this entire summer. Livan vs Dayan. Twin vs twin. For the first time in their entire lives they are on different organized baseball teams, and now for the first time ever we were finally getting them actually Mano a Mano. Dayan, pumping an easy breezy 96 off the bump, hummed a fastball for a called strike on his brother. He tried to sneak another one by him, but Livan was more than ready for the heat, lining a single into the right-centerfield gap to bring home Carson making it an 8-5 game. Round 1 goes to Livan! Unflapped by the incredible scene that just unfolded in front of him, Zane fouled off 4 straight 3-2 pitches to work a super dramatic 10-pitch walk to load the bases. Bryson then hit a squibber up the middle that scooted under the glove of the shortstop, bringing home Eduardo and Livan and pushing Zane to third base as the tying run. Clarno then ripped a ball but it was directly to short on a hop, and the Burgers turned an easy 6-4-3 double play to end the game as Zane stepped on home plate.

It was a tough loss to take for a few reasons. 7 of the 8 Spartanburg runs both came with 2 outs and were unearned. The Bananas have statistically been the best fielding team in the CPL this summer, but the Burgers were able to capitalize on a rare 4 error night from the Nanners. The boys also stranded 8 men on base, as the CPL leaders in sac flies left a man on 3rd with 1 out, and then later a man on 3rd with no outs. Plus, just the very impressive 9th inning rally against such a powerful pitcher on the mound falling short because Clarno crushed a ball directly to the shortstop is a brutal way to go out.

On the bright side, we did finally get the Reinoso showdown, and it very much lived up to the hype. Livan said he was supremely confident with his plan when it came to hitting against his twin brother.

“I told him after the game I knew it was gonna be a fastball,” Livan said. “I was very confident even in such a big situation because he wasn’t gonna blow it by me and if he threw me a slider in the zone I would destroy it and I knew he knew that was true too.”

Livan and Dayan are both extremely talented, and it was a true treat to see them finally physically doing battle against each other.

A handful of guys had quite impressive nights at the plate in the defeat. Hitting 2nd and 3rd for the Nanners, Eduardo went 3-5 with the home run, and Livan went 4-4, all of them singles (I mentioned he just wanted to hang with Dayan), with a walk, an RBI and a run scored. Hitting 5th and 6th in the lineup, Bloomer went 2-5 with a run and Clarno went 2-4 with an RBI and a walk.

The Bananas dropped to 28-6 on the summer and 5-1 against the Spartanburgers with the defeat, but are still a half game ahead of Lexington County in the 2nd half standings as the Blowfish were taken out by the Bacon tonight. The guys will get a couple days off, and then welcome the Burgers into Historic Grayson Stadium on Tuesday. Pregame will start at 6:30 and first pitch with be at 7:00, as the guys go for revenge!

Also P.S, Nathan, I’m Just Happy to Be Here, Dettmer, cracked me up with how happy he was, full thumb up and all, in the postgame picture. A brutal road loss can’t rain on your parade, Nathan!