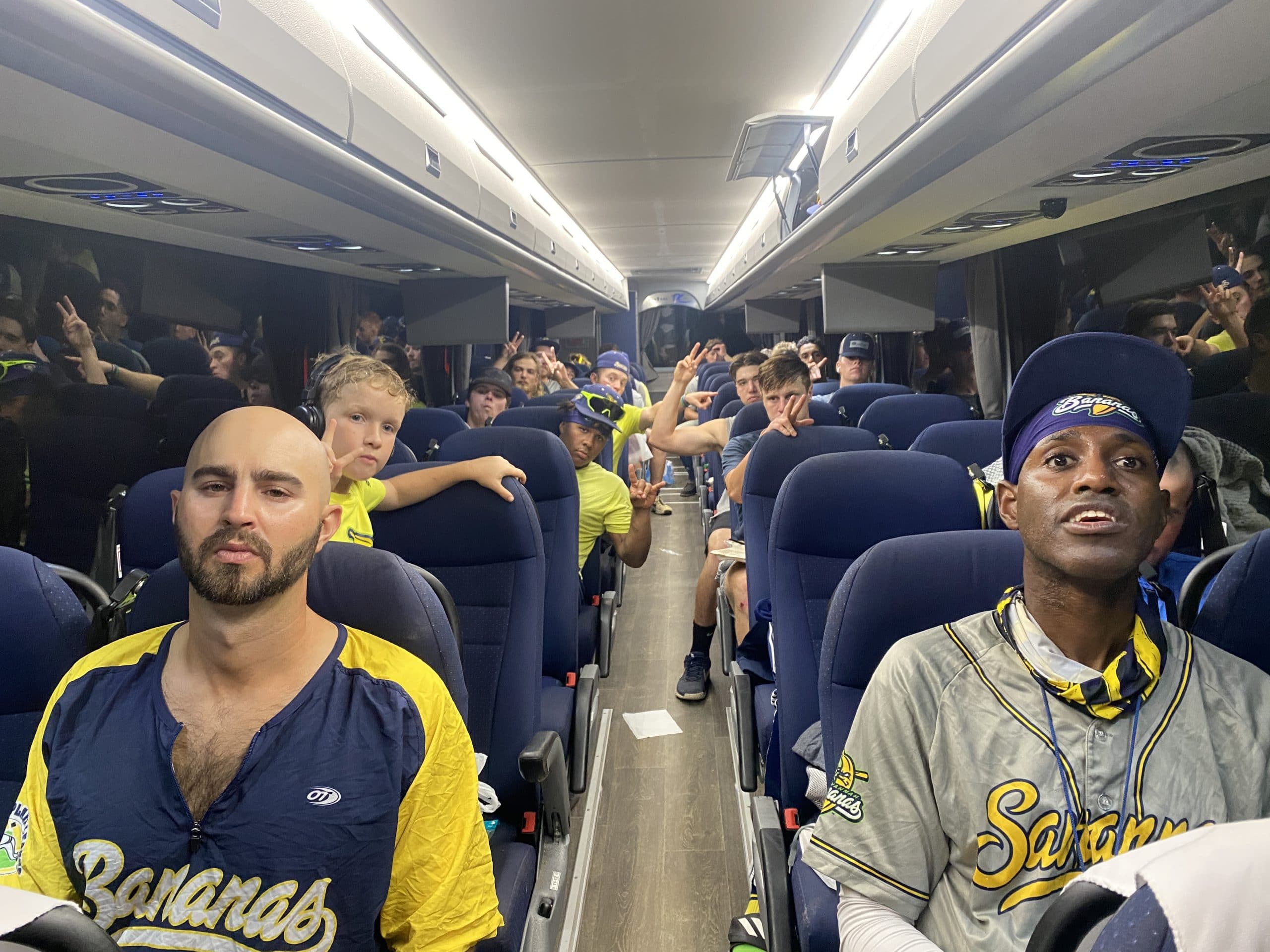 The Bananas lost the wildest game of the summer 9-8 in Lexington County. With the win the Blowfish pulled within a game of the Nanners in the 2nd half standings, and took a half game lead over the Hi-Toms for the 2nd best record on the summer, which will decide who plays the Bananas in the first round of the playoffs if Savannah does go on to win the 2nd half.

Kyle, I Knew it Was a Bad Sign When the Umpire Didn’t Like My Jokes, Luigs, made his 8th start of the summer, (which incredibly was his first on the road). In the bottom of the 2nd he walked the first two hitters on some pitches he would have preferred were called strikes, (feels like a slippery slope to let pitchers call balls and strikes though huh). An RBI single, a bunt single, and 2 RBI groundouts made it 3-0 Lexington County.

Ty, I Wish One Gosh Darn Person Would Look at My Swing, Jackson, lead off the 3rd with a walk. Cole, I Just Think it’s Funny That the Bat I Brought to the Game did not Make it to the Dugout, *Cough* Bill Knight *Cough*, Kitchen, lined a double off the right field wall to set up 2nd and 3rd with nobody out. Eduardo, ”D’you Think Those Girls Came to Watch Me Play?”, Malinowski, bounced an RBI single to short, as Cole Green Light Special’d his tush to 3rd base. Livan, “No Eddie They Came to Watch Me”, Reinoso, also hit an RBI grounder to short. Danny, I Hit the Hardest Singles in Bananas History, Oberst, lined a base hit to right setting up Bryson, “Eddie, Livan, Those Ladies Clearly Came for Me”, Bloomer, who smashed a 2-run homer to right-center for his 3rd home run in 2 days. I got rather excited in the booth…

Bryson Bloomer’s first home run of the night, and 2nd in 2 games. Pretty unreal in itself, but just wait for the next video I post… pic.twitter.com/JPSSwjolhT

The Blowfish came right back in the bottom half, getting 2 singles to once again set up Jeff Cyr, who with two outs snuck a 2-run triple just under the diving attempt of Drew, I’d Much Rather Talk About What Happened Next Half Inning, Yniesta’s diving attempt in right. Cyr would then come in on a wild pitch to make it 6-4 Blowfish.

Leading off the top of the 4th, Drew destroyed his 2nd homer in as many games to left-center to cut the Lexington County lead to 1. Matthew, The Only Thing Lower Than My ERA is My Arm Slot, Steidl, gave up a run in the bottom of the 4th on a balk with a man on 3rd to make it 7-5 Blowfish.

In the top of the 6th, Ty bounced an infield single to short, stole 2nd, and then was driven in on a clutch 2-out single from Eduardo to once again cut the lead to 1. Steidl ended up going a season-high 4 innings of relief, giving up just the 1 run and striking out 6, spiking his ERA by 0.12 as it went all the way up to 1.77.

Nolan, Man I Miss the Stash, Daniel, threw a 1-2-3 bottom of the 8th, to send the Nanners up for last licks just down a run. With 1 out, Livan chopped an infield single to 3rd, and was pinch run for by Jesse, I Have a Particular Set of Skills, Sherrill. For the 2nd straight at-bat, Danny destroyed a ball straight to the centerfielder, which brought up Bryson with the Nanners down to their final out. On a 1-1 pitch, Bloomer did it again…

Anddddd Bryson Bloomer’s 2nd home run of the night, and 4th in 2 games. It ended up being a heartbreaking loss for the Nanners (story coming shortly), but another really impressive evening from the pride of @RacersBaseball pic.twitter.com/5ZxvzGMK0h

I nearly passed out from excitement as it was the most clutch home run I’ve gotten to call in my Bananas broadcasting career. Bryson gave the Nanners an 8-7 lead going into the bottom of the 9th, and unfortunately unbeknownst to me, the script was about to get even better but for the Lexington County fans, not the Nanners’ faithful. Nolan went back out for the 9th, and with an 0-2 count on the first hitter he nailed him in the helmet with an 89mph fastball. The next man lined a single up the middle to put the tying run in scoring position and the winning run on 1st. Then things looked to turn to the Bananas favor, as the Blowfish tried for a sac bunt but popped it just a couple feet in the air, and just in for defense in the 9th, Bill, From the Booth to Behind the Plate, Leroy, made a diving catch and fired to 2nd in time for a miraculous double play. With a 3-1 count on the next hitter, Nolan dropped a slider that seemed to fill up the zone, so much so that Crosby Jones waited a good 3-4 seconds before realizing it wasn’t called a strike and trotted down to first as the go-ahead run. Then Nolan threw a slider literally right down the middle. I’m not trying to use hyperbole here, just ask Bill who caught the ball center-center, and was shook to his core that it wasn’t called a strike. After a fastball low and in, the Blowfish catcher Riley Cameron smacked a walk-off, 2-run double off the right field wall to win the game 9-8 for Lexington County.

It was a tough loss to put it lightly, a game the Bananas led for just a half an inning in the 3rd and then again for just a half an inning in the 9th, and they were one out away from stealing on the road. It was a monumental win for Lexington County, as they’re now a half game ahead of the fast fading Hi-Toms in the race for 2nd place in the CPL West, and just 1 game back of the Bananas in the 2nd half standings. The Nanners will have a chance for instant revenge though, as they face the Blowfish again tomorrow, this time at home in Historic Grayson Stadium. Pregame will kickoff at 6:30 eastern and first pitch will be at 7:00. The Bananas are now 8-2 against Lexington County on the summer, and are looking for a statement win on Saturday in Savannah. Can’t wait for it!