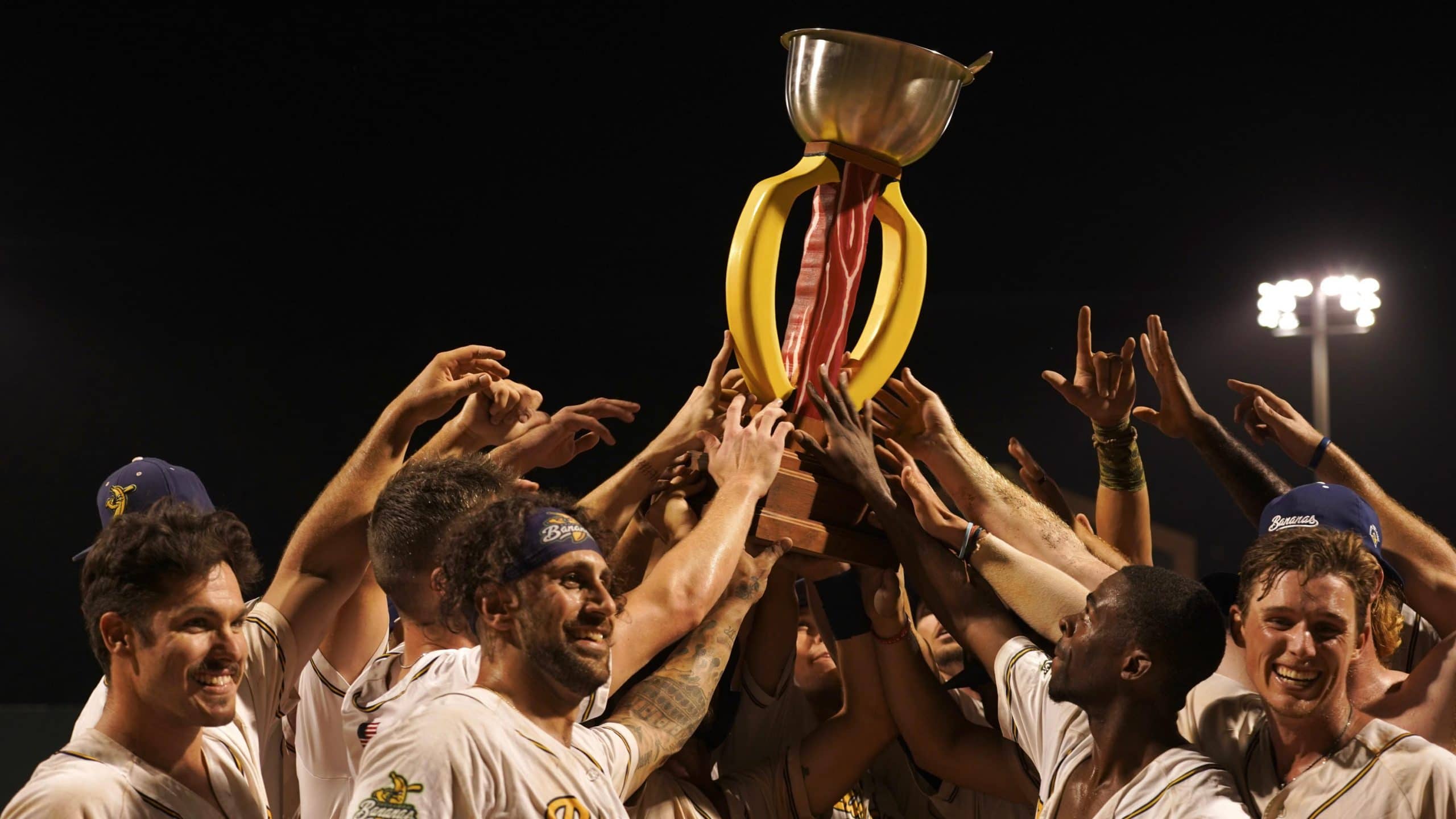 The Savannah Bananas capped off a wild 2021 season in the only way they know how: a wild walk-off win in BananaLand.

Though there was a final Breakfast Bowl game scheduled for Saturday, decisions beyond the team’s control forced Thursday night’s game to be the final contest at Grayson Stadium. The boys, keeping the fans in mind, made sure to leave them with a wild 8-7 walk-off win over the Macon Bacon. Now, the Nanners completed the 2021 season with a CPL championship and a Breakfast Bowl series win.

Per usual with home games, it’s your boy Kevin, Mr. Balloon Hands, Hickey with the game recap. Let’s get to it.

First Inning: To start it off for the Nanners, the team turned to four-year Banana and CPL champion Kyle Luigs. The Macon wound up scoring three runs in the first inning. They were feeling themselves. But we weren’t worried at all. Despite a hit-by-pitch and stolen bag for the verified Bill LeRoy, the Nanners couldn’t scratch a run across. 3-0 Macon.

Second Inning: Again the Bacon score a run thanks to some luck. Still not worried at this point (we never would be tbh). In the bottom of the frame, my boy Chris Vazzy Vasquez with the sweet hips walked, stole second (cue the Daddy Shark), and moved up to third on a passed ball. Jacob The Ice Man Teston worked a walk. SWAT officer Jansen Neff rolled into a double play but Vazzy scores. Nanners on the board and down 4-1.

Quick break in the action. The boys (Ashly Morries, Mikey Vavasis, Davis Agle) and I crushed the player dance. Led by the great Zack Frongillo, Entertainment Director for the Nanners, he was our fearless leader in our rendition of “Bye, Bye, Bye.” Did we do it better than *NSYNC? We can’t really say to be sure. But yes.

Third Inning: Luigs strikes out donut hitter. Big part of the inning. A Bacon hitter winds up getting to third and thought he could be slick and steal home. Nice try. We have a literal SWAT officer behind home plate. Neff catches the swinging strike and tags out the runner at home. The legend of LeRoy showed off that ridiculous speed with an infield single to start. He’s fast. Dalton, The Songbird of our Generation, Mauldin works a walk. The savviest of Nanners in Josh Lavender wears one on the ankle because he’s a dawg. Bases filled with Nanners. In his first live-action in BananaLand since the premier series, Vazzy knocks a flare single to right field. LeRoy and Dalton score to chip away at the lead. 4-3 Bacon (for now). Vazzy steals second because, frankly, he can. Looney (Jacob Teston) is a big team guy and takes a hit by pitch off his foot. He’s fine, though, after he gave the whole crowd at BananaLand a hard 90. Bases loaded. Neff then used those great retinas to work a bases-loaded walk. 4-4 tie ballgame. The rafters are going to come down in BananaLand.

Fourth Inning: Luigs gets two outs (fly out, strikeout). Dearman comes in with the most electric entrance I’ve ever seen. More on that later. In true Dearman fashion, he gets a K. No big deal, kinda big deal. Dalton and his platinum pipes worked a walk with one out. Dalton swipes second because the man literally does it all. Dalton winds up scoring on an error that Zak, Miley Cyrus Impersonator, Whalin hit to first base. 5-4 Nanners.

Fifth Inning (ghost written by the incredibly legendary Justin, Dr. D, Degrandis): Dearman continues to fool the Bacon hiters. He hip thrusts during a fly ball to Flash tha Kid for the first out. Electric. Meanwhile, Bill LeRoy is in his own world doing karaoke at third. He even got the rest of the infield in on it. They actually sang karaoke in between pitches. The next two Bacon hitters bloop singles into center field. Seems like that’s the only way they can reach base. Dearman then fans the next two Bacon hitters, giving the Bananas all the momentum they need for a big bottom of the inning. Still 5-4 Nanners.

Sixth Inning: Thank you DeGrandis. The Bacon wind up pushing three runs across in the bottom of the sixth inning. They are getting excited as they should. But we were still never worried. Our fearless leader in Scott Strickland kept the energy up in the dugout. Nevertheless, the Macon are up 7-5 at this point.

Seventh Inning: This is where things get even wilder. Not only does Dakota McFadden hit balls to the moon, but he also throws absolute flames. With tree trunks for legs, McFadden blew smoke through the Bacon bats. Now it’s time for the comeback. Vazzy’s smooth aurua hypnotized the pitcher into a leadoff walk. Statistically speaking, those score 100% of the time. My locker buddy and fellow Party Animal, Jacob Teston, rocked a single to get two guys on. We’re rolling. Mikey V forgot all about his macros when he took a pitch to the dome like a champ. Dawg. On a slash, Flash Tha Kid did his job with a sac fly to right field. Vazzy scores, Teston moves to third. 7-6 Macon. The Bacon wisely walk Bill LeRoy. I mean he’s verified. What else would you do? With the bases loaded. Dalton Mauldin, who’s a big fan of Charleston now, hit an infield single to tie the game. What a guy that Dalton. Still, bases loaded and who comes to the plate but D-Mac. The freight train that is his swing path connected with a low and outside pitch. He sends it to right-center as two runs come home to score, and the Nanners walk off their final game at home.

Two Claps And A Ric Flair

Of course, it wasn’t just all baseball. We had plenty of fun in the final home game of the 2021 season. First, we are going to start it off with an absolute electric entrance from one of the best players and humans to ever grace the Nanners uniform. Christian Dearman was a man without fear as he strolled to the mound in a kimono in true Ric Flair fashion. You know what that means? He’s more aerodynamic when he throws.

But that wasn’t the only treat for the fans in BananaLand on Thursday. Dearman whipped off the kimono only to be wearing cleats, leggings and the Bananas trademark underwear. Talk about being a snack. Then my dude wound up electrifying the atmosphere even more with three punch outs.

“To be the man, you gotta beat the man.” – @RicFlairNatrBoy pic.twitter.com/G1ui0a7Zaa

AND he struck him out. You really couldn’t ask for anything better. pic.twitter.com/eypdD1MtWw

A Thank You To BananaLand

We can’t do what we do without Bananas faithful and their everlasting support. We may be on the field. But we do this for you, the fans. We want every night in BananaLand to be a magical and memorable experience. We cannot thank you, the fans, enough for inspiring us to continue being an avenue of change and most importantly, fun, to the game of baseball. Here’s to you, Nanners Nation. Thank you for all the love, support and energy you gave us at Grayson Stadium this summer!

What’s Next For The Nanners

Though we already clinched the Breakfast Bowl, there is one more game to be played in Macon on Friday night. Following the conclusion of that game, the Nanners will be back in action for another go-round with the Spring Series.