skip to Main Content
912-712-2482
From Athens to Savannah, Ben Anderson’s Patrol in Centerfield 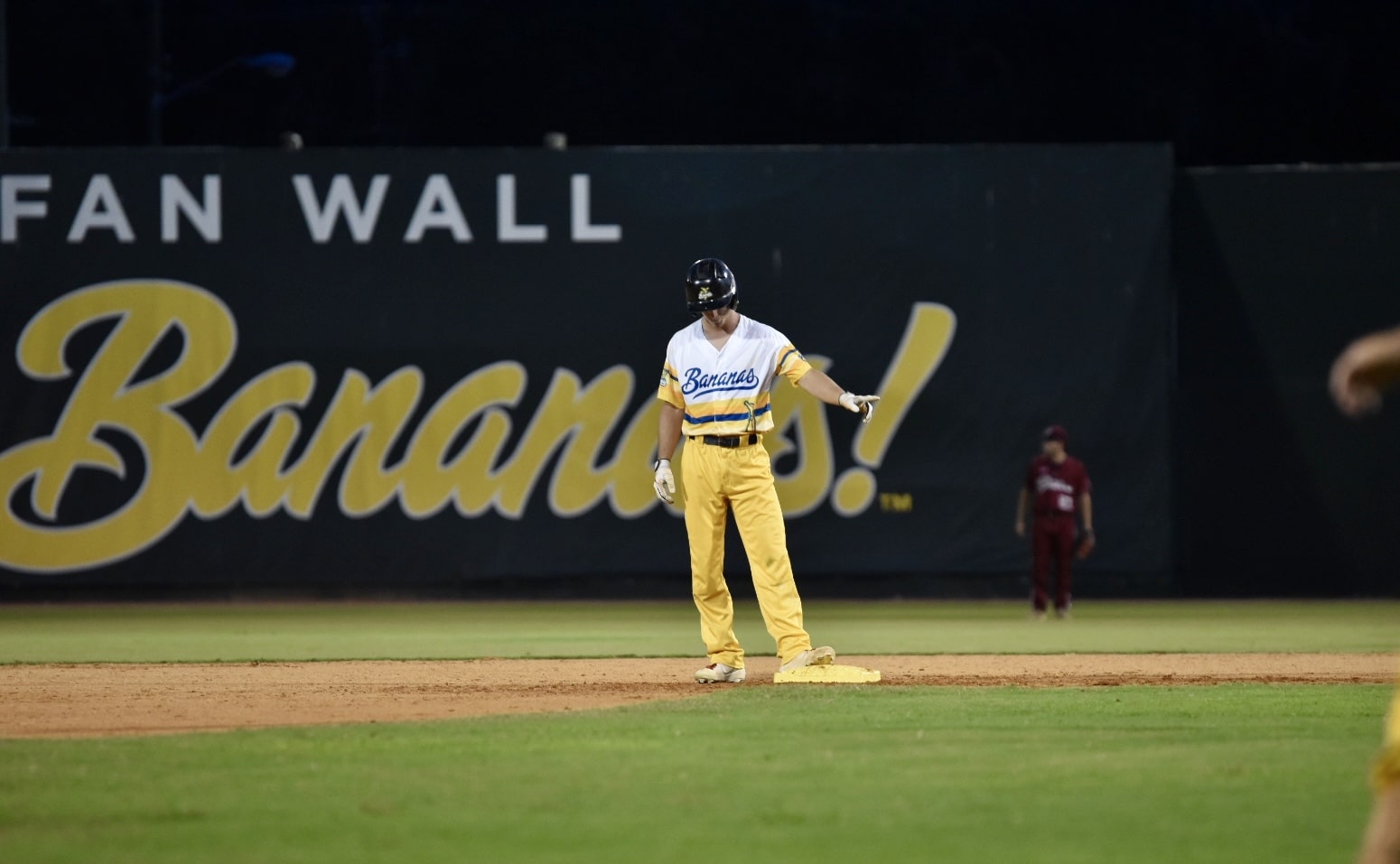 In five years of Savannah Bananas baseball, Ben Anderson may just be the best player to patrol centerfield in Grayson Stadium. He is your prototypical captain of the outfield, with blazing speed and a powerful, accurate arm. At the plate he has a sharp eye for the strike zone, great bat on ball skills, and even a little pop. He’s the starting center fielder and leadoff man for one of the best college baseball teams in the country. But when he was a senior at Lagrange High School, there were no powerhouse programs offering him scholarships.

“It’s every kid’s dream to go to a big D1 school,” Ben said, “ but it just wasn’t in the cards for me at the time, I guess I was a little undersized.”

He had some walk-on offers to big colleges but nowhere he really wanted to go, so he decided to accept an athletic scholarship from Furman University, a school with less than 3,000 students enrolled.

“I liked the campus and the coaches were cool so I decided to give it a shot,” Ben said.

It turned out to be the right decision. Ben’s year in Greenville, South Carolina, wasn’t just good, or great, or even fantastic… it was historic. He led the Paladins with his .361 batting average, 46 runs scored, 73 hits, 107 total bases, a .461 on-base-percentage, and a .530 slugging percentage. Yes, all of those were team highs. Oh and his 7 triples set a school record and were 5th most in the country. He was the leadoff man for all 52 games of the season, he had 22 multi-hit contests, and reached base safely in 32 straight games. He was the first Furman freshman to be named All-Southern Conference since 1979 and he took home Freshman All American honors for the icing on the cake. Safe to say it was a decent start to his college baseball career.

“I really liked my teammates, we all got along well and we all had a great year,” Ben said, “but I wasn’t really enjoying anything outside of baseball. The classes, the extracurriculars, the other sports just weren’t as big and I had been to visit my friends at Georgia and other schools and I actually ended up liking those schools a lot better.”

In the midst of his dominant spring at Furman, he told his parents that he wanted to transfer to a bigger school after that semester and they gave him their support.

“I figured, I would rather enjoy college, have fun, and if I can play baseball that would be great too,” Ben said.

He called up his head coach and told him he wanted to transfer. Coach Harker was reluctant to let Ben go, understandably so after he had one of the greatest seasons in school history, but Harker eventually gave in and signed his release papers. Ben had his old travel coach put the word out to whoever he could that he was transferring and wanted to play at a big school. The best option Ben could have imagined called him first.

“Georgia called me and said, ‘Hey we have a spot for you, we’d love to have you,’” Ben said.

Ben visited the University of Georgia and immediately knew that was where he wanted to be. He would have to sit out a year after transferring, and he took the time to hone his skills and get stronger.

“I really worked hard that year in the weight room and with the coaches,” Ben said. “I wanted to make sure that I was getting better in my redshirt year so I could play at the same level I had been at in high school and at Furman.”

“That redshirt weight program is not easy,” Ben’s teammate at Georgia, Jack Gowen, said. “That’s four to five days a week for the whole fall, for the whole spring. As a redshirter, as a transfer you can’t play so they’re not worried about you being sore. They just want to put as much muscle as they can on you and basically see how tough you are. Ben crushed that.”

The following summer, Ben went to Wisconsin to play in the Northwoods League for the Madison Mallards. He had a solid summer with the wood bat, hitting .276 and earning 51 walks while only striking out 41 times.

“Madison was an awesome place, I had an awesome host family and I really enjoyed my summer there,” Ben said.

He returned to Athens finally eligible to play and hoping he could build on the success he had two years before at Furman. He had graduated from the Southern Conference to the Southeastern Conference. In the SEC he was going to see a lot of the top arms in college baseball. A reasonable person may set lower expectations for themselves, but Ben felt there was no reason he couldn’t keep doing what he had been doing throughout his entire baseball career.

“I don’t wanna say I was expecting to have the same success I had in my freshman year but I was hoping that I was going to play at a very high level and I knew that I could,” Ben said.

If you were thinking that the ramped up level of competition would cut into the otherworldly stats that Ben had begun his college career with, I’m sorry to say you’re mistaken. Once again, Ben had a historic season. He led the Bulldogs with a .414 batting average, a .544 on-base-percentage, 24 runs scored, 6 doubles, and 15 walks. He was the first Georgia player to hit over .400 for a season since Gordan Beckham in 2008 and he had the highest average for a Bulldog since Buck Belue in 1982. When the season got cut short due to COVID-19, he had reached base in 19 straight games.

“I was just playing the game, having fun, trying to compete,” Ben said. “Looking at it in hindsight, it’s a great feeling to know that all my hard work in my redshirt year paid off and I just want to continue that this upcoming year.”

“Obviously it was shocking to see the season he had just because his numbers were so good,” Jack said, “but it wasn’t as much a shock to us as it was to other people. He had been swinging the bat like that in practice for over a year at that point so it was awesome to see him doing that when it counted now.”

With Ben at the top of the order and patrolling centerfield, the stacked 2020 Georgia squad finished the season as the 2nd ranked team in the country. Ben had hopes of playing in the Cape Cod League for the summer but the league cancelled it’s season due to COVID-19. Luckily for him, his head coach Scott Stricklin had also reached out to Bananas head coach Tyler Gillum.

“Coach Stricklin called me and said he had a really good player for us,” Gillum said. “It was his starting center fielder and leadoff hitter and he said he was a great kid too.”

“Obviously I had heard of all the Savannah Banana antics, the videos you have to do, and all the extracurriculars for the fans and how crazy the games were. I was excited for that aspect. I’m not really like a big center of attention guy so I didn’t wanna be at the center of any of the videos or anything so that was my main concern,” Ben said, laughing.

He had his buddy Jack Gowen in his second year in Savannah to show him the ropes and Ben settle in quickly, especially once games started and he saw how serious the baseball aspect of the Bananas operation is. He didn’t get involved in much of the in-game player entertainment because it is mostly dominated by pitchers, but he did have fun getting involved in the broadcasts.

“I ended up really enjoying my time in Savannah,” Ben said. “I really liked being mic’d up in the field, I thought that was really cool and I thought the Hey Baby was pretty enjoyable too.”

Ben’s play on the field wasn’t slowed down by the chaotic atmosphere around him in Grayson Stadium. He hit .282, had a .440 on-base-percentage, and led the team with 25 runs scored.
“I think what makes him really good is his strikezone discipline,” Gillum said. “He’s great at putting the ball in play, using his speed. He’s one of the fastest players I’ve ever coached, probably the fastest guy I’ve ever seen go from 1st to 3rd. Obviously that’s great for his play in the outfield too. He takes great routes and has a really good arm, he’s really got the whole package.”

Gillum thinks that Ben’s eye is so good that it actually hurt him this past summer.

As Ben plays at a higher and higher level, the strike zones will shrink as well and that bodes well for his continued success. The dream for him is to be manning centerfield for the Atlanta Braves, although he said playing for anyone in the MLB would certainly count as a dream come true. It’s not his only plan for the future though. He’s majoring in biochemistry and planning on taking his MCAT, (the test needed to get into med school), next fall.

“He’s a super mature guy,” Jack said. “He’s got all his priorities straight whether that be a med school class at 1:00 or baseball at 2:00. He’s gonna be there and he’s gonna get it done.”

Balancing such a difficult subject with the obligations of a D1 athlete does lead to a jam packed day.

“Wake up, go to class, go to baseball, lift, study for an hour or two, get all my homework done, go to sleep, and repeat,” Ben said, chuckling. “It’s doable but it definitely keeps you busy.”

There are certainly worse backup plans than becoming a doctor. Ben looks forward to the possible challenge that a future in medicine presents, but he is putting all the energy and work he possibly can into being the best baseball player he can be.

“With his tools man, as long as he keeps working, keeps getting better every day, I wouldn’t say it’s crazy that he’d be in the big leagues at some point,” Gillum said.

Although that is the ultimate goal for Ben, he has his sights zeroed in on this upcoming season.

“I’m just going to try and do everything I can to help the team and hopefully we can make it to Omaha,” Ben said.

On top of everything he does on the field, Tyler Gillum and Jack Gowen raved about the mental aspect of Ben’s game.

“He’s never too high and never too low,” Gillum said. “You always know what you’re gonna get from him and that’s really professional at-bats, trips around the bases, and plays in the outfield.”

“Ben is probably the perfect example of what every coach would want,” Jack said. “You have zero worries when you have that guy. If you had 27 Ben Andersons, you’d have a National Championship team and that coach would sleep 10 hours a night without a blanket.”

One can only dream.