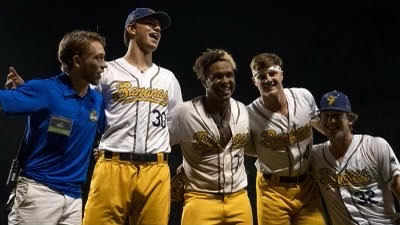 The Savannah Bananas (15-1) continue their dominance over the Coastal Plains League, remaining undefeated at home with a 10-2 win over the Spartanburgers (5-9) on Saturday night at Historic Grayson Stadium.

Bringing your children to the game probably felt like a good idea at the time. Get some nice father-son bonding with America’s pastime. However, it was the sons who got some revenge for all those chores they’ve been asked to do. When given the choice of free Bananas apparel or the chance to pie their father, it was an easy decision.

In honor of Fathers Day tomorrow, we just had two boys pie their dad in the face a total of five times. You love to see it.

Even when Jesse Cole, the gracious owner of the Bananas, continued to bribe the children with free t-shirts, among other things, the two sons knew exactly what kind of opportunity they had in front of them. When would they get another chance to pie their father? Probably never. So they did it. Five times. Smart choice, young fellas. Just don’t be surprised if there are extra dishes to wash for the next week.

A mainstay in not only Banana Land but Grayson Stadium over the last 20 years, Reggie has been a massive part of the atmosphere. His “Regginade” concoction is treated like Michael’s Special Stuff from Space Jam. His first year as an official assistant coach for the Nanners, it’s Reggie’s birthday on Monday so he threw out the first Banana on Saturday night.

It’s Reginald the Legend’s birthday on Monday, so he threw out the first banana. It was an absolute heater if we do say so ourselves. pic.twitter.com/KhcSlQsDWU

I’m not saying this, combined with the Regginade and pre-game speeches, is the reason for the Nanners leading the CPL. But I’m also not not saying that.

After starting pitcher Kyle Luigs surrendered two runs in the top of the first inning, the Nanners fired back in the bottom of the second inning to put up a five-spot. It started with shortstop Jesse Sherrill, who drew a walk to begin the inning. All the guy does is get on base. If the world was ending and the only thing keeping Earth from drifting from its orbit was for someone to get on base, Sherrill would be the guy to call.

Right fielder Drew Yniesta followed that up by smoking a single to left field. When I smoke, I mean B’s Cracklin’ BBQ, Cuban cigar levels of smoked. Bill LeRoy, sporting a glorious new mustache, got the Nanners on the board with a single, scoring Sherrill.

After a Ty Jackson strikeout, the CPL’s best hitter in Dan Oberst continued his torrid streak, rocking a single to tie the game at two-a-piece. Tristan Peters walked to the plate with a plan to join the hit parade. That he did when he drove a ball to left-center for a double, scoring LeRoy and moving Oberst. Livan Reinoso, who looks like he can lift Thor’s hammer, capped off the inning with a two-RBI single.

The Bananas faced three pitchers for the Spartantburgers that inning if you wanted more information on just how big of a frame it was.

The conclusion of the first half of the summer is almost here. If the Nanners finish the first half as the top team in the CPL West division, they are guaranteed a spot in the playoffs and at least one home game. Currently, the Bananas are 15-1 (.938), ahead of the second-place High Point Thomasville HiToms, who are 9-4 (.600). With the win and the HiToms loss, the magic number is currently at three. If the HiToms lose two of their next three and the Bananas win their next game, they clinch.

Players of the Game

There’s no better pitcher than Kyle Luigs in the CPL. The man is a strikeout machine. In 5.0 innings pitched, Luigs allowed two runs but struck out 10 on five hits and just one walk. Tristan Peters was a man on a mission going 3-for-5 with an RBI and a run scored while Livan Reinoso drove in two runs and also robbed his twin brother of hit down the third baseline. That’s always a good day. Eduardo Malinowski also had two hits, two walks and two runs scored in five plate appearances.

The Bananas are off for the next three days and will return to Grayson Stadium on Wednesday, June 23, to host the Lexington County Blowfish.