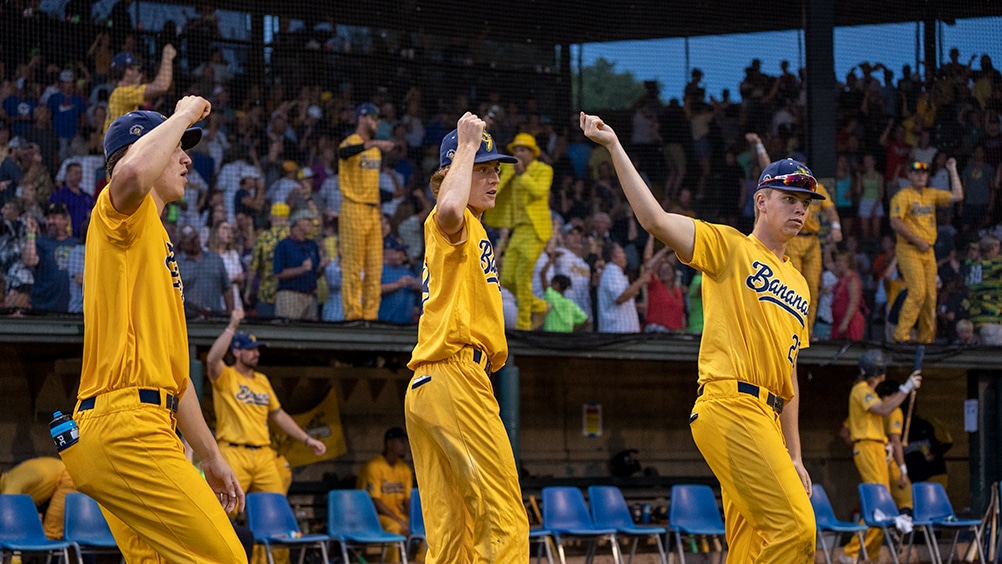 The Savannah Bananas moved to 29-6 on the season following a 7-4 win over the Spartanburgers at Grayson Stadium on Tuesday night. Here’s how the big victory went down:

With the Nanners threatening in the third inning, Oberst walked up to the plate with the buffest swag this side of the Mississippi. Spartanburgers starter, sophomore Andrew Lucas out of Arizona State, thought he had Oberst on the ropes. Facing a 1-2 count with Jesse Sherril and Livan Reinoso in scoring position, Oberst put the team on his back like a broken-legged Greg Jennings.

Just as the mitochondria is the powerhouse of the cell, Dan is the powerhouse of BananaLand. He added to his home run total on the season with a missile so hard that it probably ended up on NORAD’s radar. No worries, though, they probably just filed it under “Another Danny Dinger” so we can assume it’s not a threat to national security. I’m not sugar-coating how hard this ball came off the bat either. It traveled 401 feet to left-center and came off the barrel at 104 MPH.

Even Rico Biko lost track of it because it was hit so hard. That’s a missile. This gave The Most Entertaining Team in Baseball a 4-0 lead early.

Ball shot out of here so fast that even @bikoricosuave lost site of it. Danny Oberst with a three run blast to left center! pic.twitter.com/x4zcTqRVX8

Even though he was behind in the count, Oberst was simply focused on getting some elevation to drive his teammates in.

“It was second and third with no outs and I just choked up trying to put something in play. It ended up being an elevated fastball, and I got a good barrel on it,” said Oberst.

The ball was well struck. We’ve covered that extensively. And while from the press box it looked as though the laser off Dan’s bat might have hit the wall, he himself had no doubt that drive would give the Nanners the league.

As the celebration commenced after Oberst crossed home plate, the boys lined up as paparazzi on a catwalk. Strut your stuff, Dan, You certainly earned that stroll down the catwalk.

The freshman righty got the nod Tuesday night for the Nanners, and it was his final appearance in BananaLand (for now) as he’s hit his innings limit for the summer. No better way to end your summer than with a win. The current Aggie went 3.1 innings pitched allowing six hits, two runs (both earned), no walks and four strikeouts. Though it was his first time in Savannah, it’s not something he’s going to forget anytime soon.

“It was amazing. I had so much fun playing here. I definitely want to return if they’ll have me. It’s actually a lot like games in the SEC,” said Dettmer following his final outing.

Dettmer was lights out for the Nanners this summer. The kid was untouchable. His six wins led the team at the time of his departure. In 8 games pitched (7 starts), Dettmer sported a ridiculous 6-0 record with a 1.63 ERA and 24 strikeouts in 27.2 innings pitched.

There are plenty of Banana shenanigans (Bananagans?) that go down at Grayson Stadium. While he couldn’t pin down his favorite (I put him on the spot tbh), Dettmer will certainly keep his Banana teammates in mind as he heads back to school in College Station.

“Just playing with this team,” Dettmer said. “A lot of times in summer ball, guys are playing for themselves before they go back to school, but we just want to win and have fun while doing it. I’m definitely going to bring the energy and liveliness back to A&M.”

Nanners of the Game

Every hitter in the Nanners lineup—excluding the Heart of BananaLand Bill Leroy—recorded a knock on Tuesday night. Bill Knight had a big game going 2-for-3 with three RBIs while Cole Kitchen also had two hits and two runs scored. Knight got the Nanners going with an RBI single in the second inning. Oberst followed up the next inning with the rocket launched from his bat to give the Nanners a 4-0 lead.

After the Spartanburgers got two runs back in the fourth inning, they doubled down to tie the game in the top of the sixth. That tied score didn’t last long thanks to the Knight in Shining Armor. Bill got enough on a fly ball to left field to score Kitchen, who singled, stole second and moved to third on a subsequent errant throw. That clutch sac fly gave the Nanners a 5-4 lead in the sixth. Big team guy that Bill.

Bryson Bloomer, who smoked a double to left-center earlier in the game, drove in Oberst with a booming sac fly to left. Knight recorded his third RBI of the night when he drove in Zane Denton to give the Nanners a 7-4 lead in the bottom of the eighth.

After Dettmer’s 3.1 innings pitched, Nolan Daniel followed up with 2.2 innings. He allowed two earned runs while striking out two. The rest of the way was lights out for the Nanners pitching staff. Matthew Steidl allowed two hits and struck out one in 1.2 innings while Dylan Cunningham turned the lights off in the kitchen for the Spartanburgers in the final inning en route to striking out two.

The 29-6 Bananas remain a game up on the Lexington County Blowfish for the second-half lead in the CPL West division. The two teams face off Wednesday night at Blowfish Stadium with first pitch set for 7:05 p.m. ET.