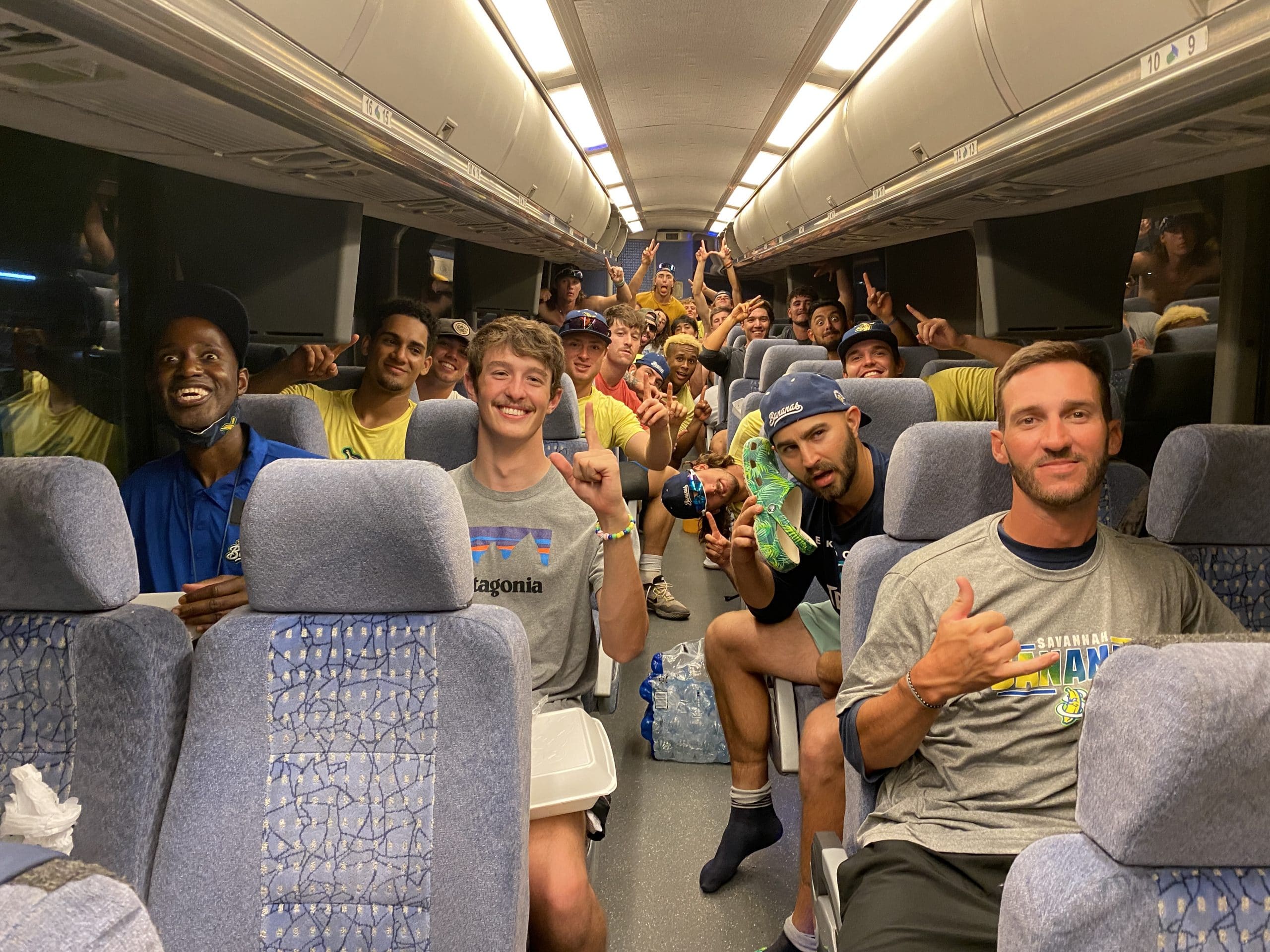 History repeats itself. The 2021 Pettit Cup Champions are once again the first team in the Coastal Plain League to clinch a playoff spot, as the Nanners used a five-run top of the ninth inning to knock off the Bacon 9-6 in Macon. The Nanners improved to a league best 16-5 on the summer and with only three games left to play in the first half cannot be caught by the other six teams they share the CPL West with. The three-game division championship series will kickoff on August 1st in Historic Grayson Stadium, but the guys are still fighting for home field advantage in the Pettit Cup Championship as well, which can be secured by locking down the overall best record on the summer. Okay, I think that’s all the important information that I needed to leave you with to kickoff the article, now let’s get into the weeds of how the fellas pulled off the win on Wednesday night.

With one out in the first inning it was Armando, I Promise I’m not the Godfather, Becerra, who got the offense going with a single through the right side of the infield. Livan, El Salvador, Reinoso, laced a double down the rightfield line to drive in his former Erskine teammate and put Savannah on top 1-0. Jestin, My Hat’s Got a Mind of it’s Own, Jones, struck out a pair of Bacon hitters in a 1-2-3 bottom of the first.

Jestin and Macon’s starter Peyton, The Forest City Firestarter, Cariaco, exchanged scoreless second and third innings and then Peyton used a 6-4-3 double play in the top of the fourth to keep the Bacon deficit at just a run. Leading off the bottom of the fourth, Bryce, The C’s Will be Back and Better Than Ever Next Year, Matthews, bombed a solo home run off the Luther Williams Field scoreboard in right-center to breakup Jestin’s no-hitter and tie the game a one run apiece.

The tie would not last long, as Caden, The Berryhill Basher, Green, roped a one-out double down the left field line in the fifth. Taylor, And for My Next Stunt, Justus, stroked a liner to left to bring in Peanut and put the Bananas back on top 2-1. Jones worked a perfect bottom of the fifth, as he retired all six guys he faced after the solo home run to end his fantastic night with five innings pitched, giving up just the one run on that one big hit while walking one and striking out eight.

Mando led off the top of the sixth with an infield single and with one out Bryson, The Boomer is SO Back Baby, Bloomer, bombed a double off the right-center field wall sending Becerra to third base. Ty, Real G’s Wear No BG’s, Jackson, pushed a bunt up the first base line for a hit that brought home Armando and sent Bryson to third. Ty then swiped second and Dylan, Huma Huma Nooka Nooka Akuwa Aa, Kurahashi-Choy Foo, drove in Bloomer with a groundball to second. With the Bananas ahead 4-1, Bobby, I’ll Let My Dancing do the Talking, McBride, hit the first batter he faced, gave up a bloop single, and then walked a man to load the bases. Bobby then picked up a huge strikeout of James, Saved by the, Bell, and got a soft grounder to short after that but Caden threw the ball away allowing a second run to score, putting the tying run on third and the go-ahead run on second. McBride got another huge K, this one on a front door slider to Tanner, I’ve Got the Need for, Tweedt, but Davis, Who Put First Base There, Heller, came through with a huge two-out. two-run single to put Macon ahead 5-4. In came Nolan, He Needs Some Milk, Daniel, who got a flyout to end the threat.

Sam, U Up?, Replogle, came in to toss a perfect top of the seventh and Nolan reciprocated in the bottom half. Replogle worked around a single and a hit batter to keep Savannah off the board in the top of the eighth and No-No survived a double and walk in the bottom of the eighth to keep the Nanners down just a run and extend his season scoreless streak to 13.1 innings of work.

Tyler, The Bryce is Right, Gillum, pinch hit Bryce, Come on Down!, Madron, to start the top of the ninth. Bryce tattooed a ball to right-center for a leadoff double and Gillum went back to his bench to pinch hit Beau, You Won’t Like Me if You Don’t Give Me a Pickle, Brewer, who bounced a grounder up the middle for an infield single that was snagged by the shortstop Andy, Throw’s it Away, Blake, who threw the ball away allowing Bryce to score and sending Beau to second. Back at the top of the order, Drew worked a walk and Armando smoked a carbon copy of Madron’s double into right-center, except for the fact that Mando grabbed three bags for his troubles as he drove in Brewer and Yniesta putting the Nanners ahead 7-5. With one out, Bloomer doubled on a liner to right to score Becerra. After a deep flyout to center from Ty that pushed Bryson to third base, KFC bounced an infield single to second that scored Bloomer for the fifth run in the inning.

Gillum and Corey, The Only Man to Text on the Way Out to the Mound, Pye, went with Hunter, The High-Cheesemonger, Entsminger, who gave up an unearned run and struck out three to secure the 9-6 victory.

The Bananas have clinched the first half division title and the playoff spot that goes with it in all four of Tyler Gillum’s season’s as head coach in a full CPL. In every year except 2019 the Nanners have been the first team to secure a playoff spot in the league. Savannah is now guaranteed a chance to vie for their third CPL Championship in their sixth summer with the Pettit Cup on the line.

Nolan Daniel, who threw 2.1 scoreless frames, picking up three K’s along the way.

Armando Becerra, who went 3-5 with the go-ahead two-run triple in the ninth and scored three runs to boot.

There’s certainly a healthy amount of pressure off the defending CPL Champions now that they’ve punched their ticket to playing in August, but there is still plenty of work to do when it comes to securing the best overall record in the league and the home field advantage throughout the playoffs that comes with it. The guys will try to start that quest off on the right foot Thursday night as the Bacon visit Historic Grayson Stadium. First pitch will be at 7:00pm eastern and we’ll have an update tomorrow on what time the pregame show will get going on Bananas Insiders.

As always, thanks to Adam, I’m Sorry But I REALLY Wanted to Play Mafia, Moreau, and Josh, Livan Reinoso’s Unofficial Agent, Talevski, for help with these Tigers’ nicknames.