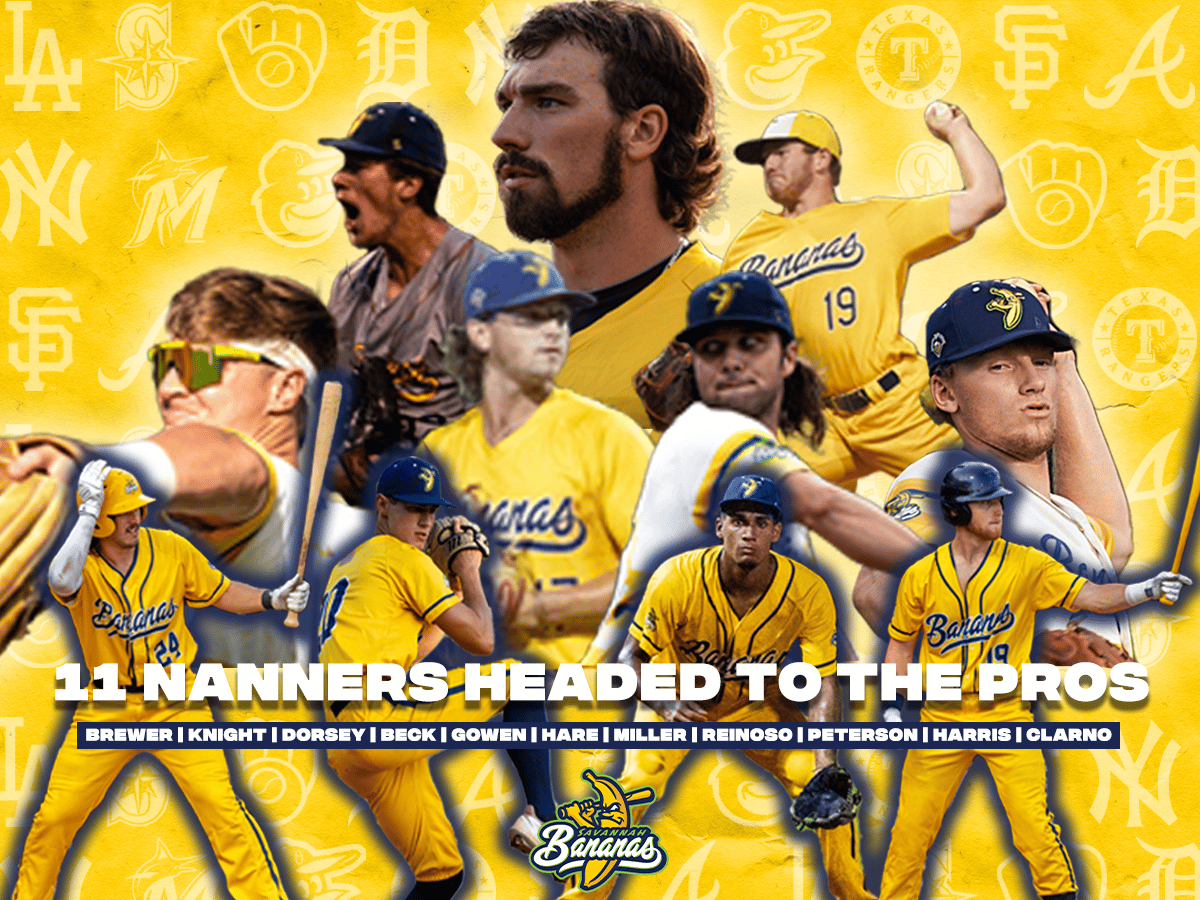 Nate Peterson was the first Banana drafted this year, going in the 8th round with pick number 252 to the Milwaukee Brewers. Peterson was a superb southpaw for the Nanners in 2019, as he posted a 1.33 ERA and struckout 35 across 27 innings pitched. After spending a couple years at Oklahoma State University, Nate transferred to the University of Illinois Chicago for his 2022 campaign.

Bill Knight was taken by the Seattle Mariners in the 10th round with pick 306. An excellent Banana in both 2020 and 2021, as he hit .333 in his first season in Savannah and followed it up by hitting .299 as he helped the Nanners secure their second Coastal Plain League Championship last summer. Bill was a four-year starter in the outfield for Mercer University, increasing his contribution to the Bears with each new year culminating in a fantastic final season in which he hit .337 with a .415 on-base-percentage and blasted 17 home runs while stealing 10 bases in 11 attempts.

The Detroit Tigers snagged 2021 CPL Pitcher of the Year, Joe Miller, in the 11th round with the 327th pick. Joe was absurd last summer, going 6-0 with a 1.50 ERA and 71 strikeouts in 42 innings tossed for Savannah. Our Ivy League King, the pride of the University of Pennsylvania, was great for the Quakers this past spring and followed that up with four rock solid appearances for the Chatham Anglers in the Cape Cod League this summer.

In the 13th round the Baltimore Orioles took Jared Beck 377th overall. Jared was the Bananas 7-foot wonder last summer, as he dazzled out of the pen posting a 1.05 ERA while striking out 38 opponents and allowing just 9 hits across 25.2 innings of work. Beck went from Heartland Community College to Illinois State for a semester and then spent his last two years at St. Leo University. This past season he was a workhouse for the Lions, sitting down 105 hitters in 68.1 innings thrown across 13 starts.

Carson Dorsey was taken off the board by the Texas Rangers in the 17th round with pick number 499. The freshman from Gulf Coast State College was a force to be reckoned with for the Nanners this summer. After allowing four runs across 2.1 innings in his first start of the summer, Carson threw 20 straight scoreless innings ending his season in Savannah with a 4-0 record, a 1.61 ERA and a team high 32 punchouts.

The New York Yankees couldn’t resist the stache and flowing hair combo on the head of Beau Brewer, as they took him in the 19th round with the 580th pick. Yankees nation is already fired up over the addition of the sophomore from Paris Junior College to the farm system, although it seems to be mostly because of his look and eccentric walk-ups to the plate this summer…

They should be over the moon about his ability to barrel balls too as he hit .419 as a freshman, .416 last summer for the Souris Valley Sabre Dogs in the Expedition League and then .411 this past spring in Paris, Texas. Beau hit .339 across 32 games this summer for the Bananas, good for 5th best in the league.

After the draft the Atlanta Braves got a hold of Nick Clarno, who they intended to use a pick on but couldn’t get a hold of him during the last day of the draft because he was lounging in the pool. Just another legendary Nick Clarno story, who compiled too many to count across his three years as a Nanner. The Energizer Bunny of Bananaland, Nick was an enormous log in the fire that fueled the 2020, 2021, and 2022 teams. He was an instrumental cog in the championship team last summer, hitting .314 with a .428 OBP across 31 regular season games. In the postseason he led the Nanners in hitting, going 9 for 23 across the 6 games good for team highs with his .429 AVG and .538 OBP. Clarno spent his first three years of college at the University of North Georgia and his last two at Lenoir-Rhyne University, where he was second-team All Conference, (and deserved to be first team) this past spring.

The Silent Slugger himself, Livan Reinoso was signed by the Los Angeles Dodgers. One of the greatest Bananas of all-time, Livan put up stellar numbers in 2021 as he led the team with his .362 AVG and 37 RBI’s in 37 games, while he was 2nd on the squad with a .455 OBP. This summer the Dominican Dominator led the Nanners with his .344 AVG and added a couple scoreless innings on the bump to the resume as well. After clobbering baseballs for two years at Chesapeake Community College and two more at Erskine College, the Behemoth of Barrels took things to a whole new level this past spring at Tennessee Wesleyan University. Livan smashed a nation-leading 32 homers in 61 games, while also leading all of NAIA ball with 95 RBI’s, ranking 4th in the country with his 100 hits and 5th with 82 runs scored. The cherry on top was his 12.1 innings of relief in which he allowed just 2 runs on 2 hits while striking out 24.

The San Francisco Giants inked Davis Hare to a contract after the draft as well. Davis was a 2021 Banana from Florida State, who has terrific stuff highlighted by a mid-90’s fastball that has insane movement on it. The right-hander out of Florida State has shown two-way capabilities but makes his bacon on the mound, where he posted a 2.67 ERA in 2021 and a 3.72 ERA this past season, while compiling 100 K’s in 73 innings in his career as a Seminole.

It turns out the Braves were not satisfied with picking up just one former Banana this summer, as they followed up the Clarno signing by locking up Hayden Harris too. The southpaw was an end of the season addition last summer and after just one relief appearance in the regular season Hayden shined in the playoffs. With the Nanners one loss away from being knocked out of the postseason, Harris tossed 1.2 innings of one-hit ball against the HiToms in a necessary win in High Point-Thomasville. He followed that up with 3 incredibly hitless innings of relief in yet another elimination game, this one being the decisive game 3 victory over the Morehead City Marlins in the CPL Championship. The Augusta, GA, native spent five years at Georgia Southern University but was a summer ball globetrotter throwing in the Valley Baseball League, the Northwoods League, and the MLB Draft League on top of his brief but memorable time in the CPL.

For the second year in a row the Bananas were tied for most players drafted in the CPL, this time around with Peninsula Pilots. Last year the Nanners had eight players selected tied with the Lexington Blowfish for the league lead. Before the shortened five round draft in 2020, Savannah led the CPL with eleven players taken in the 40-round 2019 draft.

Bananas head coach Tyler Gillum was enthused to see his team at the top of the Coastal Plain League list of draftees once again.

“What an awesome group of guys we’ve had over the past two to three years,” Gillum said. “It’s really just a testament to the guys’ hard work and the kind of talent we have with the Bananas every year.”

Tyler also chuckled when he thought about this being his fifth season in Savannah and how much he’s heard from the outside world about his team choosing to take entertainment more seriously than baseball.

“It’s just super cool to see the guys recognized for everything they’ve done and what they’ve accomplished with the Bananas. It continues to prove we’ve been one of the best teams in the league and the country at playing the game, contrary to what many people think when they hear ‘The Savannah Bananas.’”

The Nanners won their second Coastal Plain League Championship last summer in their fifth year with the Petitt Cup on the line, and were the first team this season to secure a playoff spot by winning the CPL West in the first half. They have locked up home field advantage in the first round of the playoffs already, which will kickoff July 31st in Historic Grayson Stadium.