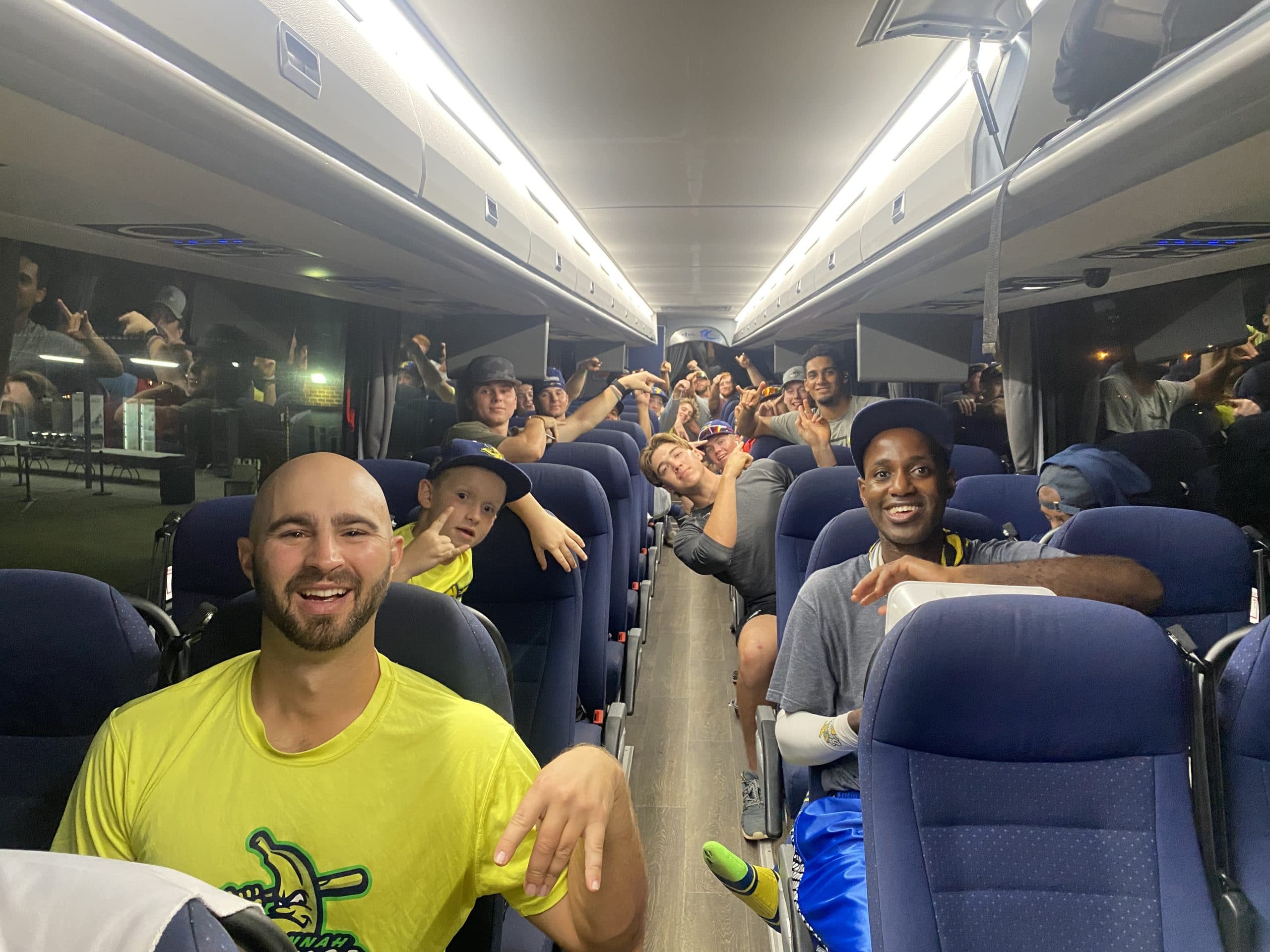 Oooweee that was a wild ride! The Bananas just took down the Bacon 7-5 in an extra-inning thriller on the road behind an incredible 2 home run, 6 RBI performance from Livan Reinoso. It was a game that would have just lasted 9 innings if not for a blasphemous foul ball call from the home plate umpire, but the boys were able to bear down come with away with the victory in extras anyhow.

The fun started in the top of the 1st inning, as Livan, I Think I’ll Handle This One Boys, Reinoso, lined a 359 foot blast to left to give the Nanners a 1-0 lead. The 3rd inning started with a Zane, I Hate CPL Umpires, Denton, walk and then a Bill, I Wish the Football Team Would Come to Cheer Me on Every Game, Knight, single up the middle. That set up Livan for his second RBI of the night, as he bounced a ball to shortstop to bring home Zane.

I’m sure the 2 runs felt like a 10 run deficit for the Bacon, because it was their bad luck that for the 2nd straight week they had to face the CPL strikeout leader, Joe, “Was That Ball Really Just Put in Play?”, Miller. The pride of UPenn gave up a couple seeing eye singles in the 4th for the only run he would allow on the evening, as he struck out 7 in 4 innings of stellar pitching. Joe pushed his strikeout total up to 57 for a 13 K lead over 2nd place, and his 1.34 ERA is 2nd best among qualifying arms, only trailing his teammate Ryan, Sorry Bout’ It, Kennedy.

Matthew, I Know for Darn Sure Neither of the Homers I’ve Given up are Leaving Grayson, Steidl, got Joe out of a 1st and 2nd no-out jam in the 5th. With the game still 2-1 in the 6th, Livan singled and Eduardo, I Really Might Set the Bananas Hit-by-Pitch Record, Malinowski, reached on an error, setting up what should have been the turning point of the game. Bryson, This is Literally the Unluckiest Moment in my Baseball Career, Bloomer, scolded a line drive deep down the left field line, easily scoring Livan and Eduardo to give the Bananas a 4-2 lead. That was what seemed to happen at least, before everyone realized that home plate umpire Jim, Oopsie Dasies, Stros, called the ball foul. Now this ball bounced a good foot plus fair, like it was far closer to the outfield grass than the foul line. But for some reason Jim thought it was foul, and unfortunately he gets the final say in the matter, no matter how berserk Tyler, I Cannot Believe I Wasn’t Thrown Out of This Game, Gillum, went on him. Bryson ended up popping out, and the Bananas failed to bring home any runs in the inning.

Matthew then threw a scoreless 6th, before giving up a game-tying solo home run to Dondre, This Would Have Been Super Cool if We Won, Bremner, with one out in the bottom of the 7th. All in all Steidl was really solid, giving up just the 1 run in 2.2 innings of relief. The Saluki’s ERA went all the way up to 1.84, as he’s now given up 2 of the team’s league low 5 home runs (and yes neither of them would have escaped Grayson Stadium).

Gillum, and Corey, We’ll Pickoff at Least Half the Pinch Runners We Face, Pye, turned to Andrew, I’ve Got the Nastiest Pickoff Move This Side of the Mississippi, Armstrong, to get the final out of the 7th. After a couple checks on Jacob, The Double Agent, Pierce, at first base, Andrew fired one pitch home and Pierce tried to swipe second, but was gunned down by Nick, I Only Throw Laser Beams, Clarno. Andrew then threw a scoreless 8th inning, (picking off a pinch runner after a leadoff walk), and stranded a leadoff single in the 9th to send the game to extras.

Jesse, “Does This Count for My On-Base Percentage?”, Sherrill, and Drew, “Cause That Would be Cool,” Yniesta, were placed on 2nd and 1st base to start the 10th inning. Carson, You May Know Me by My Nickname, Jesse Sherrill, Falsken, got the inning going with a perfect bunt down the 3rd base line for a base hit. Bill Knight then flared a clutch single to left-center to bring home Jesse for a 3-2 lead. Up walked Livan, who had had enough of this nonsense, and did this…

Twitter murked my video somehow, so here it is once again! https://t.co/EMMvwp8ISw pic.twitter.com/aCoAZKcfNS

Just unbelievable stuff. Berry, My Breakfast Bowl Team May Win All 9 Games, Aldridge, said it best in a text to me after the game: “Welcome to the Livan Show”. The kid has been phenomenal for the Bananas this summer, and yet it still feels like he isn’t close to his ceiling as a Banana. Tonight he showed how devastating he can really be. Livan said it was a long time coming tonight.

“It felt really good because I’ve been barreling balls all season and I’ve been patient waiting for that first home run,” Livan said. “I definitely got the most hyped when I got to home plate because my teammates were going wild and that really fired me up heading to the dugout.”

Andrew gave up 3 unearned runs in the 10th, as he finished up his evening with a dynamite 3.1 innings tossed without an earned run while  striking out 4. Andrew kept the Bacon off the board when it mattered most too, and said it felt fantastic to keep the game locked at 2 for his guys.

“It felt amazing because I feel like that’s the first game where I’ve really been comfortable on the mound,” Andrew said. “My mentality was really just to get it to the 10th so Livan can hit a grand slam and we can win this thing.”

The Bananas ended up surviving the nonsensical foul ball call on Bryson’s liner down the left field line, to take down the Bacon 7-5 and improve to 27-5 on the summer. The best pitching staff in the league put the team on its back and let Livan’s 3-5, 2 HR, 6 RBI, 2 R, performance lead the way to victory. Also shoutout Bill Knight for his 3-5, 1 RBI, 1 R evening, as he hit right in front of Livan and made for a terrifying 2-3 combo in the Bananas lineup.

The boys welcome Macon into Grayson Stadium tomorrow night, as the pregame show will kickoff at 6:30 eastern with first pitch at 7:00 on Bananas Insiders/FloSports. Choose your fighter, either way make sure you’re tuned in as a fresh winning streak has been born again!