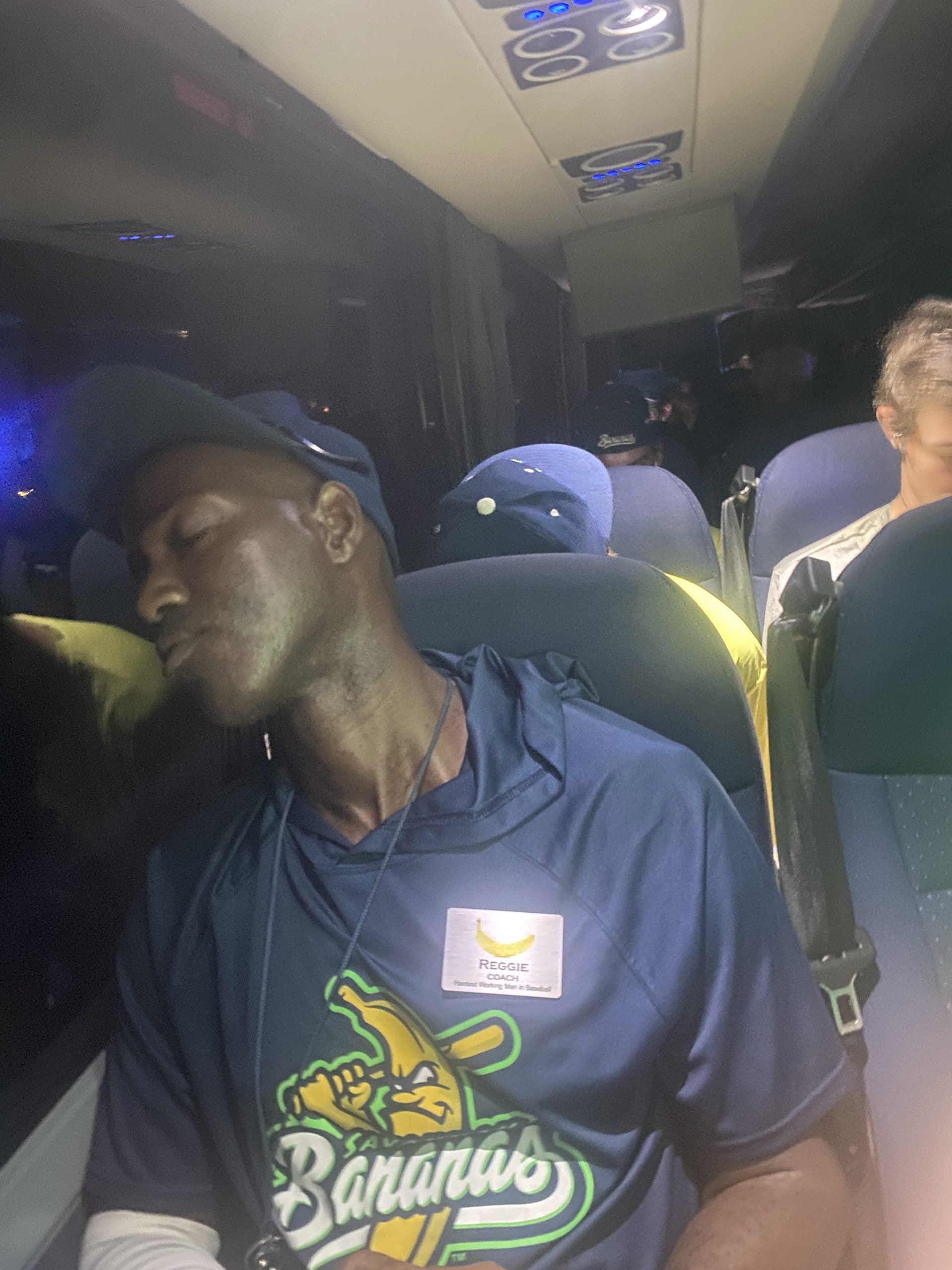 All great things must end at some point. After taking 17 out of 20 games against Macon last summer, the Nanners had won six straight to start the 2022 campaign before finally faltering against their Middle-Georgia foe.

After the boys went down 1-2-3 against Carter, I Gotta, Gannaway, in the top of the first, Andy, I Love Leaving Ducks on My Pond, Booth, stranded the bases loaded in the bottom half.

With one out in the top of the second, Armando, La Camisa Negra, Becerra, flared a single to left, stole second base, and scored on a clutch two-out, two-strike single to right from Dylan, The Kailua Crusher, Kurahashi-Choy Foo. Unfortunately for the Bananas, Andy worked into trouble with one out in the bottom half, giving up a single, a walk, a double, and another single to give the Bacon a 3-1 lead. Dylan, The Party’s Over, Cunningham, came in and got a strikeout and flyout to end the threat.

Gannaway and Cunningham exchanged 1-2-3 top and bottom halves of the third, and then leading off the top of the fourth inning, Indiana, And the Temple of Boom, Stanley, launched a home run 351 feet out to right field to cut the Macon lead to one run. Beau, You Can’t Have Your Eyes Bouncing, Brewer, stroked a double down the left field line and was bunted over to third by Mando. Brody, Is it, Wortham, worked a walk and then Choy-Foo drove in Brewer with a sac fly to center to tie the game at three. The Bacon would strike right back once again though, plating two runs on a double, a triple that could have been a single had Bryson, You Miss 100% of the Shots You Don’t Take, Bloomer, not tried to layout to catch the sinking liner that would get by him untouched, and then an RBI groundout.

The Bananas would not be behind for long though, as Caden, Time for a Blitzerwagon, Green, lined a base hit to left to kickoff the top of the fifth. Drew, Inspired by Jesse Sherrill, Yniesta, grinded out an eight-pitch walk and then Peanut and Stainer would each advance one base on a grounder to second. With two outs, Brewer bounced a single up the middle to plate both Nanners runners and tie the game at five runs apiece. Becerra beat out an infield single and then Wortham lined a single to left to bring home Beau to put the Bananas ahead 6-5.

Bobby, Who do You Think You are, I am!, McBride, absolutely diced the Bacon hitters, striking out five and getting a flyout over two perfect innings of relief.

Now this is where things get extremely unfortunate for Savannah. Josh, Never Forget My Hitless Six Innings to Start My Bananas Career, Willits, came in for the bottom of the seventh, and started his evening with a flyout to right. Then Bryce, Let There be Blood, Matthews, flicked a double down the left field line for the first hit off Willits on the summer. A walk made it first and third but then Josh made a nice play on a bouncer back to the mound and fired home to prevent Matthews from scoring as Indy tracked Bryce down as he retreated back to third base for the second out of the inning. Another walk loaded the bases and Kyle, Let Me Hear Your Best Bark, Bork, slapped a two-run single to right to give Macon a 7-6 lead. Willits gave out his third walk of the inning (after only walking one in his first 5.2 innings this season), and Tyler, That’s Okay, Finley Can Get Us Out of This, Gillum, and Corey, Strawberry-Rhubarb, Pye, turned to Leighton, Never Forget My 4.2 Scoreless Innings to Start My Bananas Career, Finley. After notching a strike, the second pitch of Leighton’s night bounced of the helmet of James, I Didn’t Actually Mean for Someone to Ring My, Bell, which pushed in another run. Then the floodgates truly opened. Javon, Finally Found Some Open, Fields, bounced a two-run single past the diving attempt of Brody at first and into right field to make it 10-6. The next four Bacon hitters all came through with RBI singles to stretch the lead to 14-6. The last of the four base knocks was given up by Max, Third Pitcher’s a Charm, Bergmann, who struck out Andy, I Mean a Golden Sombrero Would Actually be Awesome in Real Life, Blake, to finally end the onslaught.

When all was said and done, the Bacon sent 14 guys to the plate in the bottom of the seventh and scored nine runs, all of them with two outs, to blow the game wide open. The Bananas had not given up more than five runs in total in any of the previous 15 games they had played this summer. Baseball, folks, baseball. The Bacon would go on to win 14-6.

Two bright spots for boys in grey was Beau Brewer, who went 3-5 with a double, 2 RBI’s, 2 runs scored, and a stolen base, and Armando Becerra who went 3-4 with a run and one bag swiped in the loss.

The guys will regroup and return to Historic Grayson Stadium to take on the Lexington County Blowfish, who currently sit two games behind the Nanners for second place in the CPL West. Pregame will kickoff at 6:00pm eastern, the first pitch will be at 7:00pm eastern, and all the action as always can be found on Bananas Insiders!