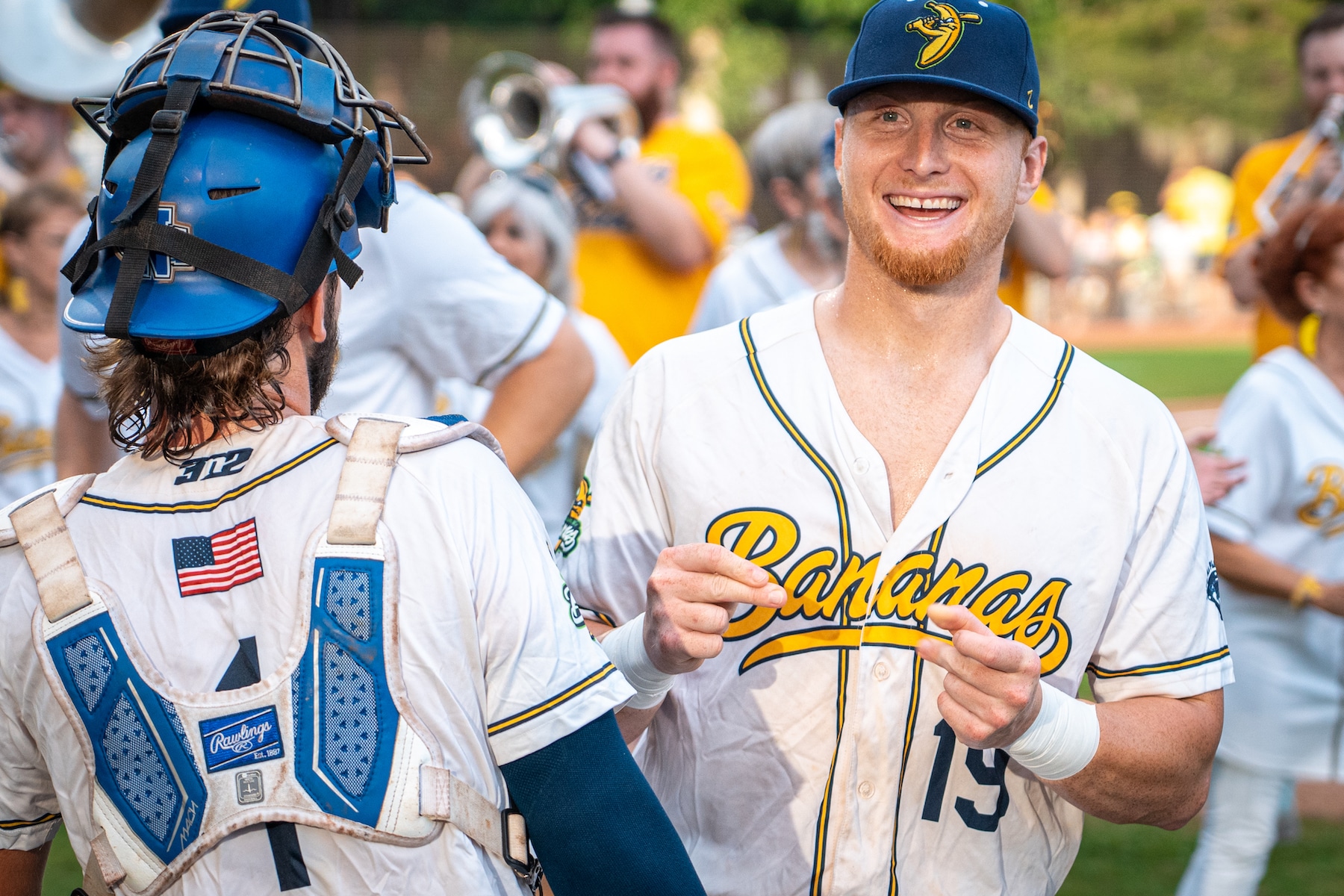 Come one, come all, to the reading of the July 24 game recap. It’s me, Kara again. Kevin is still in the Bahamas (hope you’re wearing sunscreen, Kevin), so I’ll be filling in for one final time. Let’s get into it.

We’d like to start by saying there was no power outage tonight. Sorry to the man who said that was his favorite part of the game on Thursday. We’d prefer that didn’t happen again.

The night started with two lines that went all the way through the parking lot. As Marcia Griffiths might say, ‘it was electric, boogey woogey woogey.’  Fans were greeted by a two-hundred-person (not a typo) band (shoutout the South Effingham County High School Marching Band).

Now, we could go into the details about every play from the game, but in the words of Billy Joel, ‘we didn’t start the fire’, the Blowfish did when they took an early lead in the first. So, forget about the baseball for a second, let’s break down everything else that happened.

Eduardo Malinowski was brought to the plate on a literal throne by his teammates. (Check the Instagram stories for this one.)

Bill LeRoy introduced himself to the plate.

Easy top three moment of the night was Bill Leroy introducing himself to the plate. pic.twitter.com/MYk4y0pr4r

Nick Clarno did the Carlton dance on third base at least 49 times. Our new Fresh Prince

The Player Dance was extra groovy and ‘lit up the crowd’s world like the Fourth of July’ even though it wasn’t a Toby Keith song.

Okay, we’ll get to the baseball now. Those were just all very important things. Just as important as the melted butter when eating crab legs down on Tybee Island. Y’all know what we’re talking about.

Imagine this, it’s the fourth inning. We are down 1-0. Livan Reinoso comes to the plate and absolutely clobbers a ball to the wall for a triple. Dan Oberst rips an RBI to tie the game. Whoop whoop. Now, stop imagining because that was real.

Ty Jackson comes up to the plate with two outs and bases fully loaded. But he is fully prepared to make ‘sparks fly’ like Taylor Swift did back in 2010. Jackson rips one up the middle and brings home two Nanners. Taylor would be proud. This was also real.

The hit that put us in the lead. Ty Jackson just #TappedIn pic.twitter.com/tCcsHzCYzP

Pretty sure the crowd broke the decibel scale cheering for those runs. It was in that moment we realized Scranton was no longer The Electric City, it is Savannah, GA. Sorry Scranton. #IYKYK

Savannah, what? The Electric City!

Okay, to the fifth inning we go.

Single from Clarno. Malinowski walks. Single from Reinoso. Someone call Lizzo, because the bases are juiced.

Bryson Bloomer heads to the plate. His bat rips an AJR and ‘goes out with a bang’ as he hits a shot to right field to score Clarno and Malinowski. 5-1 ball game.

Skip a few more tracks on the CD and were in the eighth. The usual Bananas goodness takes place. Hits turn to baserunners. More hits turn to runs. Badabing. Badaboom.

The game ends with a final score of 9-2. From there, we just ignited the light, let it shine, and owned the night. Cause baby, you’re a firework. Or should we say the fireworks were fireworks. The perfect way to end the night. We love you Katy Perry.

It’s been my pleasure serving you these past two games, but I’ll let Kevin get back to it. See you Wednesday, July 28 for the next home game against Macon. The Bananas are 32-7 and headed to the Coastal Plain League Playoffs which begin August 1. We talkin’ ‘bout playoffs! Kara/Wendy/Lil Heat out.