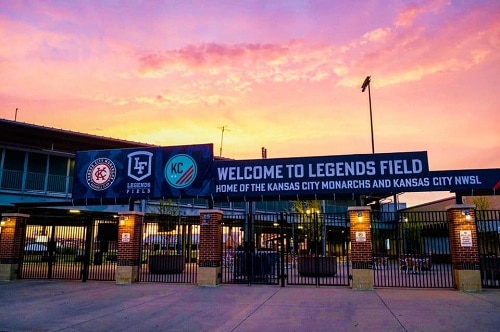 It’s been a blast for me getting to take deep dives into all of the unique ballparks that will be filled with Bananas madness this spring, but it’s bittersweet to come to the final leg of the journey. I feel like I may just have to start delving into the history of stadiums I think the Bananas will possibly visit in the future to fill this new hole in my life. The bright side is all of these stories have gotten us to where we are today, which is about a month away from the open tryout on February 26th. It will be full steam ahead at that point, with the World Tour kicking off in Savannah the second week of March. Before you know it we’ll actually be inside all of these different Banana Ball arenas and experiencing the greatness of the Nanners getting to call all of these stadiums home. And that gets to the core of why these stories were written in the first place. For, you know, the actual World Tour to happen. So it is not with a heavy heart that I explore our final stop on our journey. It is with pure glee and excitement for the moment when we get to live this all out.

That eulogy of sorts for this weekly column now must give way to the true reason you’re reading this. Our final stadium: Legends Field (also known as The Field of Legends), in Kansas City, Kansas. The Bananas trip to KC will be unlike any other stop on the tour because this journey to the Midwest is in response to a challenge from the Kansas City Monarchs. So instead of the Bananas taking on their archrival Party Animals, it will be against the 2021 champions of the American Association of Professional Baseball. 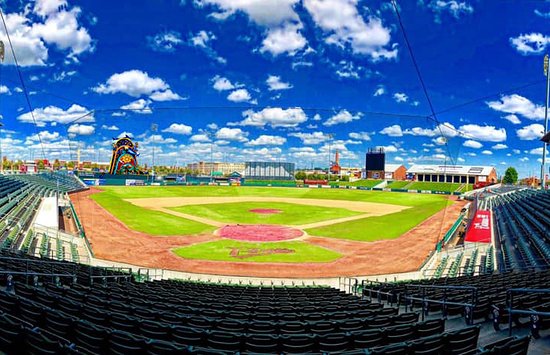 This incarnation of the Kansas City Monarchs have been around since 1993. They started as the Duluth-Superior Dukes, representing representing Duluth, Minnesota, and Superior, Wisconsin. They played their home games in Duluth, and were a member of the Northern League, taking home the championship in 1997. After the 2002 season the team relocated to Kansas City and became the T-Bones.

Ground was broken on September 4th, 2002, and the construction was wrapped up in nine months. The T-Bones took home the Northern League Championship in 2008 and then transferred to the American Association for the 2011 season. They made the playoffs for the first time in 2018 and powered right through for their first American Association championship. In 2021 they changed the team name from the T-Bones to the Monarchs, honoring the legendary Negro League team that dominated the league from 1920 to 1961. The rebranding of the franchise was driven by it’s collaboration with the Negro Leagues Baseball Museum, which is on the Missouri side of KC. The name change came with an immediate American Association championship.

The Monarchs are not the only tenant of Legends Field though. In 2008 the Kansas City Wizards, a Major League Soccer team, switched from playing in Arrowhead Stadium, (home of the Chiefs in the NFL), to Legends Field. They would play the next two seasons there before they moved to their new stadium, Children’s Mercy Park. That wouldn’t mark the end of soccer in Legends Field though, as the Kansas City Current called it home in 2021 for their first season in the National Women’s Soccer League. 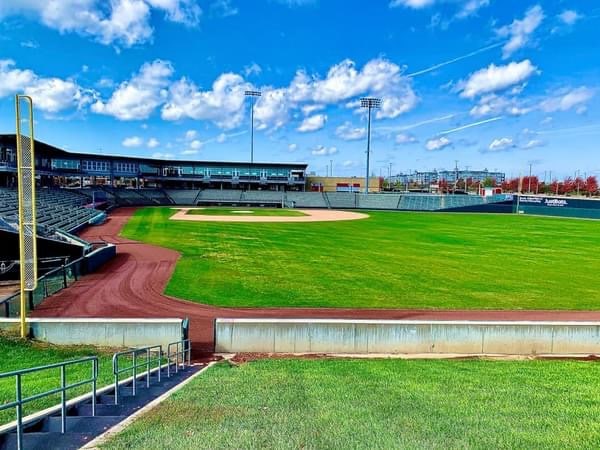 We had our resident ballpark experts Bill LeRoy and Kyle Luigs on the scene, and they were unsurprisingly fired up by what they saw.

“That’s a really cool park they’ve got,” Bill told me. “When we first got their it was setup for a soccer game and getting to take that in and knowing they can turn it right back into a baseball field is pretty fascinating. They have to completely rebuild the mound every time too, which they said they had to do 17 times over the past year, so I know Kyle will have a pristine place to pitch.”

“It had a West Palm Beach feel because it has full seating around the whole park,” Kyle said. “It’s going to be special seeing Bananas fans all throughout the outfield stands and on the berm and all. And almost all the other seating is at field level, like it’s probably the least steep stands I’ve seen in my life which makes the seats towards the back of the stands far better than they are in most parks. The other thing that really stood out were the dugouts because they’re really quite deep. Like so deep Bill’s gonna need to get up on the steps or stand on a bucket or something to see the game.”

I’ll make sure we bring a bucket for you Bill, don’t you worry buddy.

So it will all come down to this. The final stop on the Banana Ball World Tour for the Challenger Series against the Kansas City Monarchs on May 6th and 7th. The Bananas will be the home team playing in the Monarchs’ park. The 2021 CPL champions against the 2021 American Association champions. It’s about as unprecedented of an event as you can find these days.