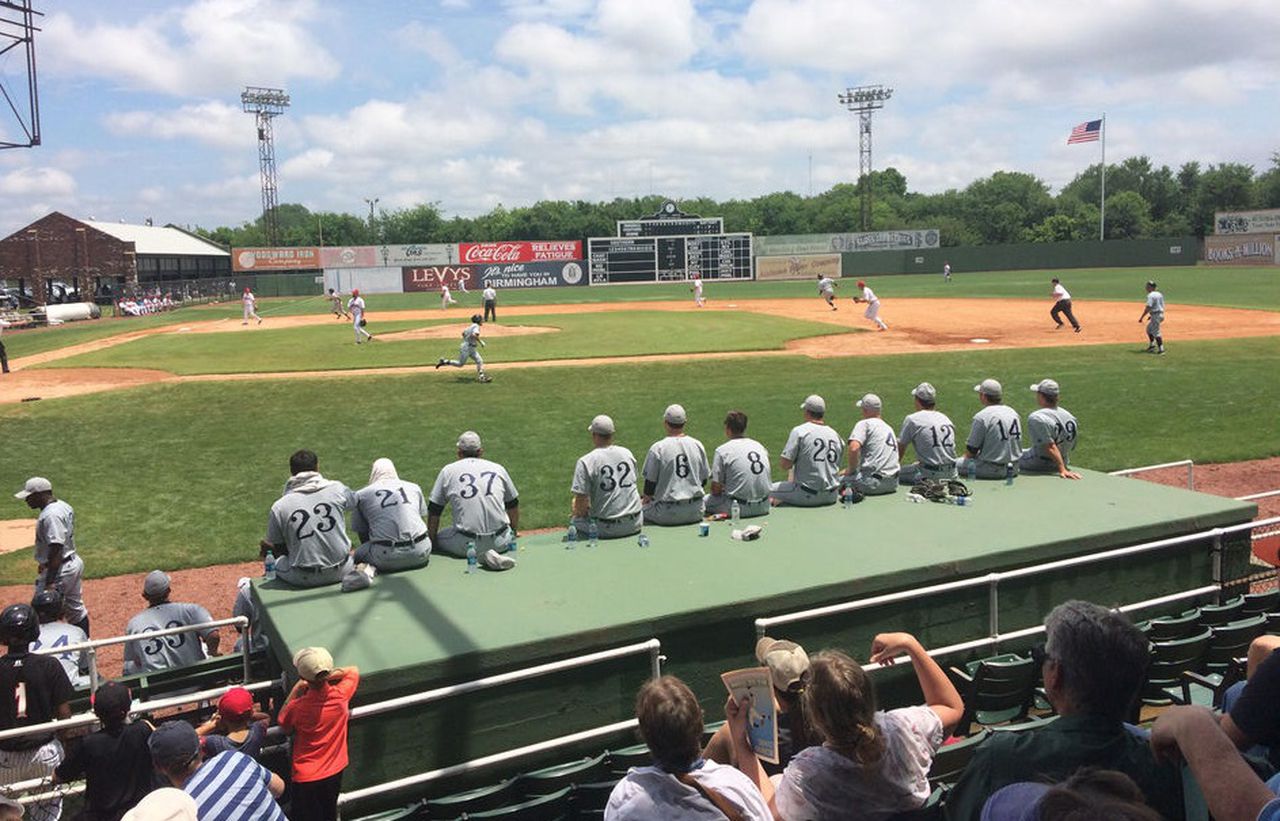 As the great voice of Intentional Talk, Tay Zonday, loves to say: “Let’s go back in time!”

It’s 1909. We’re in Birmingham, Alabama. Local industrialist Rick Woodward is visited by the ghost of baseball future in the middle of the night. The ghost whispers, “If you build it, the Bananas will come.” Rick has no idea what the Bananas are, but he certainly hadn’t found so much success in the iron industry without listening to a ghost or two, so he knew not to trifle with such powerful knowledge. He quickly purchased a majority share of the local Birmingham Coal Barons, a professional baseball team that had been around since 1897, to be temporary tenants of his new stadium until these mysterious Bananas appeared. The Coal Barons had been in the American Association since 1901 and they played at “Slag Pile Field,” an informal park on the West End of Birmingham. Rick called up Connie Mack for advice on how his new stadium should be created, and he ended up modeling the building after Shibe Park in Philadelphia (which was later renamed Connie Mack Stadium) and Forbes Field in Pittsburgh. For $75,000 the Southeastern Engineering Company of Birmingham created the first ever concrete and steel stadium in minor league baseball. Rickwood Field was completed in the summer of 1910, and then Rick sat down and waited for the Bananas. 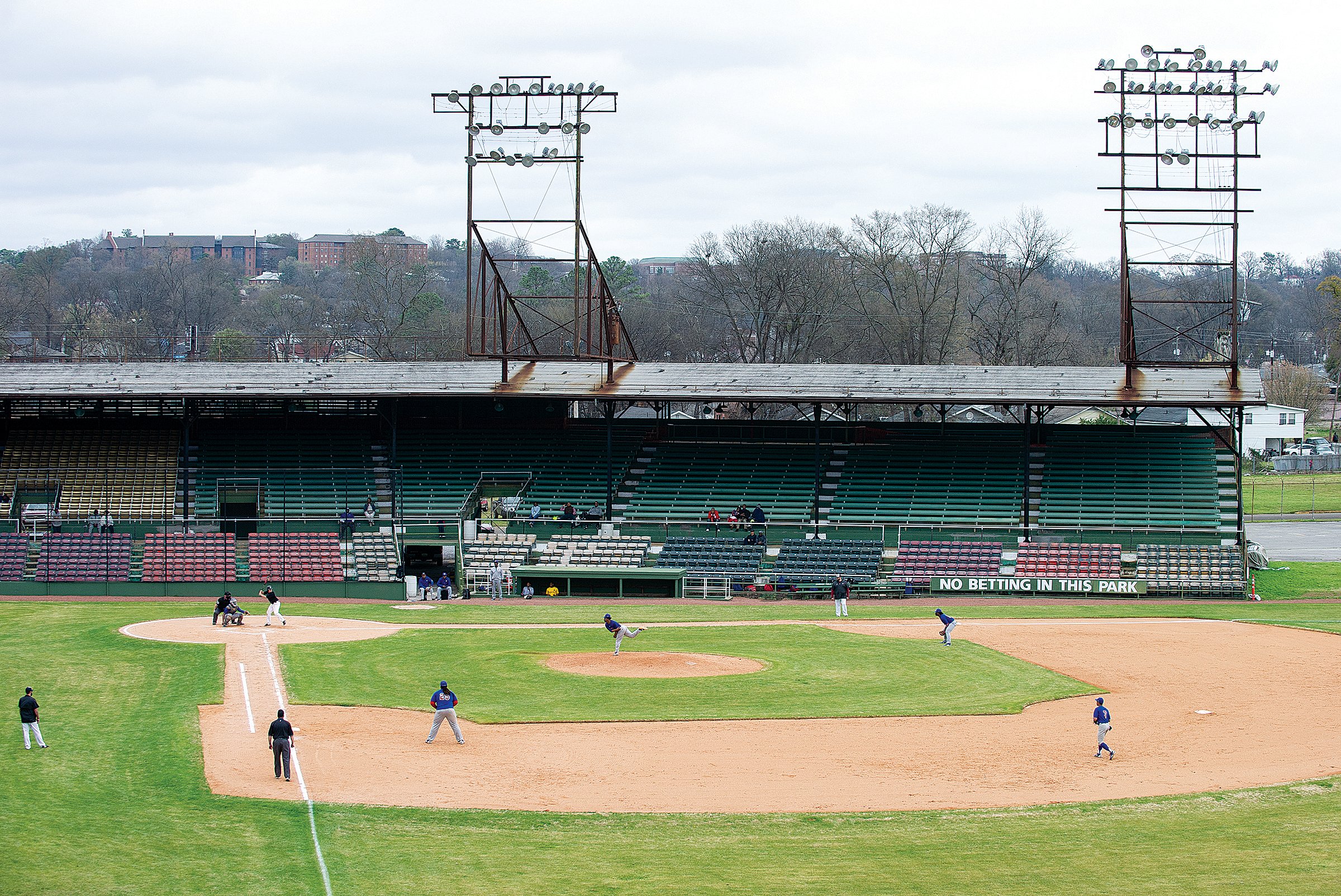 But for the time being, the Coal Barons would have to do as far as tenants went, and they started their franchise off on the right foot. Woodward invited Alabama Governor Braxton Bragg Comer, Birmingham Mayor Culpepper Exum, civic leader, George B. Ward and Victor H. Hanson, publisher of The Birmingham News, for opening day on August 18, 1910. The day was celebrated by businesses closing all over the city, making it possible for over 10,000 people to attend that first game in which the Barons took down the Montgomery Climbers 3-2. The Coal Barons would continue to sellout Rickwood for the next half century, calling the ballpark home until 1961. The Birmingham Black Barons of the Negro Southern League came to town in 1920 and would play on alternating weekends from the Coal Barons through the 1960 season. The Black Barons bounced back and forth for years between the Negro Southern League and the Negro National League until settling in the Negro American League in 1949 and staying through the team’s final season over a decade later.

The Birmingham Barons returned for the 64′ and 65′ seasons, but then became the Birmingham A’s from 1967 through 1975. The stadium was vacant for six years until the Detroit Tigers came to town and changed the name back to the Birmingham Barons in 1981. They called Rickwood home until the 1987 season when they built a new facility, the Hoover Metropolitan Stadium, in the suburb of Hoover. They returned to Birmingham in 2013 with the opening of Regions Field, just south of downtown Birmingham.

Since the Barons left in 1987 there has been a lot of action in Rickwood Field. The stadium has been under the care of the Friends of Rickwood since 1992, who have been restoring the ballpark to its former glory. They also host frequent amateur, police and semi-pro games and open the gates to visitors who can walk in and explore the historic ballpark. Since 1996, Rickwood has hosted the Barons for a throwback game in which both teams wear period uniforms, with each game honoring a different era in Birmingham baseball history. Ballpark enthusiasts from across the continent migrate to Rickwood to attend this AA regulation game, named the “Rickwood Classic”, every season.

Scenes from the movies Cobb (1994), Soul of the Game (1995) and 42 (2013) were filmed at Rickwood. Those productions contributed to the recreation of the scoreboard and press-box and the addition of 1940s period style advertisements on the outfield fence. Some of these retro-style ads have been sponsored by real Birmingham businesses, including a section sponsored by the descendants of Rick Woodward that advertises the long-gone Woodward Iron Co.

The stadium has been through plenty of physical transformations and changed hands many a time since its inception in 1910. It lost the outfield fence to a tornado in 1912. Two years later, Rick installed electric fans in the grandstands. It took on another tornado in 1921 that once again went after the outfield fence. From 1924–1927 the infield bleachers were covered with a steel-framed roof and then in 1928 a new Mission style entry structure with offices and a new concrete outfield wall were both built. In 1936 four monumental steel-frame light towers designed and fabricated by the Truscon Steel Company of Youngstown, Ohio were erected, allowing for night games.

In 1938, ole’ Rick Woodward gave up on his dream of the Bananas ever arriving, and sold the park to Ed Norton, a local businessman. Two years later Norton sold it to the Cincinnati Reds. At that time new outfield fences were built inside the original walls to reduce the field dimensions. G. J. Jebeles of Birmingham purchased the park in 1944 and in 1948 added a ladies’ rest room and reduced the dimensions of the outfield fence even more.

Just a year later ownership changed hands again, going to a partnership of Al DeMent, Al Belcher, and Rufus Lackey. They added a small restaurant in the entrance building in 1950 and installed additional box seats, which required moving the dugouts further down the baselines. In 1958 Belcher gained a majority share and control of the park. In 1964 General Manager Glynn West purchased 1000 wooden seats from New York City’s Polo Grounds and installed them at the park. Belcher then sold Rickwood Field in 1966 to the City of Birmingham.

In 1966 the lease was transferred to Charlie Finley, who brought the Kansas City Athletics’ AA farm team to Birmingham for the 1967 season. That year is remembered for the day that 14,000 disappointed fans were sent home early when the Atlanta Braves vs. Southern League All-Stars exhibition game was called “on account of tornado.” Between 1979 and 1980 the wooden seats were replaced with plastic seats in the box areas and metal bleachers under the grandstands.

In 1981 Art Clarkson brought minor league baseball back to Rickwood with the Detroit Tigers AA club, which resumed the Barons name. He had a new electronic scoreboard installed at the park. In 1986, the Barons became the Chicago White Sox AA team, an affiliation that continues today. 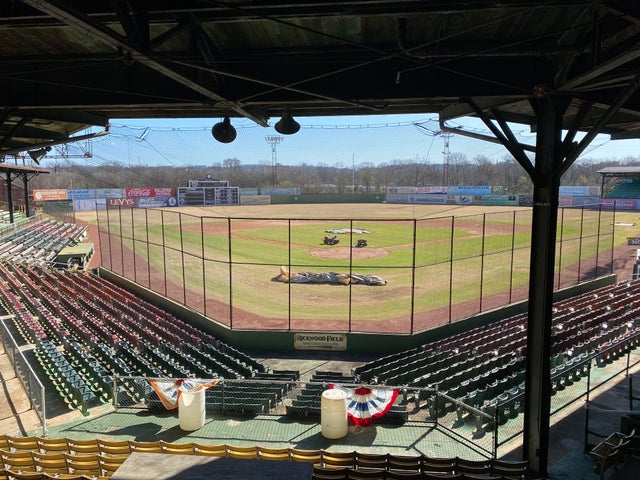 We had our resident Banana Ball World Tour ballpark experts, Bill LeRoy and Kyle Luigs, there in person, and their reports are shocking.

“It made me emotional, like I was actually a little teary eyed,” Bill told me. “You feel like you’ve died an gone to baseball heaven. The history of the place and the realization that we get to play there was just overwhelming. The old wall is still there with centerfield being 500 feet away and seeing the pictures of fans sitting out there on the field because it was too far to hit is just nuts. Plus the way the lights hang over the field was really unique. And then playing catch with the old timey four-fingered gloves was just so awesome. It felt like I was in a different time period.”

“It felt like we walked into a time machine and got out in 1910,” Kyle said. “It really was like a museum with a baseball field in the middle of it. The advertisements from the early 1900’s on the outfield wall are incredible. They’re like, ’10 cent cigarettes’ and ‘drink Coca Cola cause it’s healthy for you.’ And it’s a really nice field in the middle of all this history. I can’t wait to play there, it feels like we’re 100 years in the past when we’re in there.”

The look in Bill’s eyes when he told me Rickwood Field made him emotional nearly had me purchasing a bus ticket to Birmingham for tomorrow. This is a place that has such a unique nostalgic power to it, and you can feel it through Bill and Kyle now that they have experienced it. As exciting as every other stop is on the Banana Ball World Tour is, there is nothing that can replicate the way these men of baseball discussed this stadium. It’s almost as if they could feel Rick’s dream of the Bananas playing in his ballpark. It will finally happen, nearly one hundred and twenty-two years after its inception, on April 16th, 2022. For more information on the Banana Ball World Tour, visit thesavannahbananas.com/worldtour. 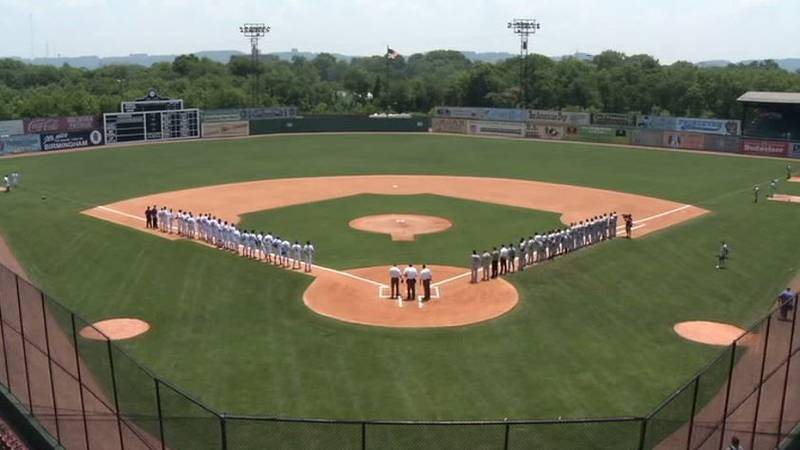