SAVANNAH, GA. May 10, 2016 –The Savannah Bananas announced today that they have rescued an abandoned seven-week-old puppy and named her the team’s Bat Dog for the season.

Daisy was left in the Grayson Stadium parking lot two weeks ago with no tags, collar or microchip.  A staff member found her alone and crying near the office door as he left for an appointment. Now, Team President Jared Orton and his wife Kelsey have adopted her.

“It was just meant to be that we’d have a team dog as part of our staff,” said Orton. “We took Daisy to the vet and aside from being hungry and dehydrated, she was in pretty good health.”

Daisy comes in to the office every day to help ship out Bananas merchandise and greet visitors dropping by to purchase 5-game plans and merchandise.

“We aren’t sure how big she’ll get, so it’s hard to say if she’ll be able to pick up a bat or just coach first base,” said Orton, “but as she grows, she’ll be a fixture at the ballpark.”

The Savannah Bananas open their season on Thursday, June 2nd.  All-You-Can-Eat 5-game plans, group tickets and single game tickets are on sale now at www.TheSavannahBananas.com or (912) 712 – 2482.

The Savannah Bananas introduced the five game plan this spring that includes tickets to the five biggest games of the year including Opening Night and all four fireworks shows.  All tickets include All You Can Eat Chicken Sandwiches, Hamburgers, Hot Dogs, Popcorn, Dessert, Soda and Water for only $15 a ticket. For more information and to purchase the five game plans, fans can visit www.TheSavannahBananas.com or call 912-712-2482.

The Savannah Bananas are owned by Fans First Entertainment who also owns and operates the Gastonia Grizzlies of the Coastal Plain League.  The Grizzlies have led the league in attendance the past three seasons, been named Organization of the Year and recognized regionally and nationally for unique from promotions and their fan experience. 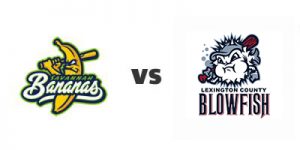