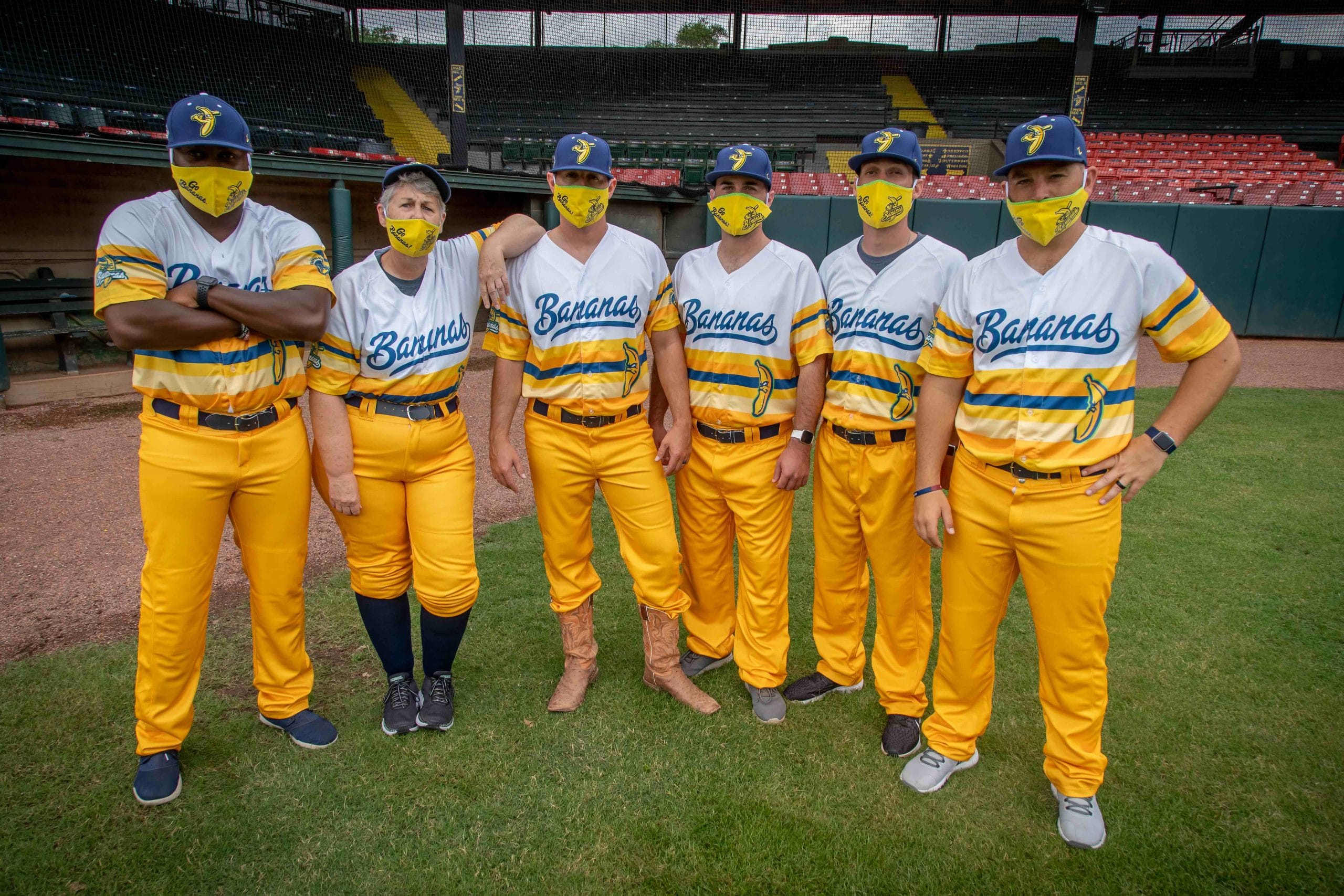 Head Coach, Tyler Gillum, is currently in his ninth year of coaching at South Mountain Community College in Phoenix, AZ where he is the infield and third base coach. Growing up, Gillum rode bulls and was an avid collector of baseball cards. In high school, he secured a state championship every year during his four years as an infielder at Latta High School in Oklahoma. Gillum is a big fan of country dancing and loves to two step. He’s also expecting! Gillum and his wife are excited to welcome their baby boy this September. This will be Gillum’s third summer with the Coastal Plain League and with the Bananas. Gillum wouldn’t be caught dead on the field at Grayson Stadium without his cowboy boots.

Corey Pye is entering his fifth year as an assistant coach at Tallahassee Community College and his second year as the pitching coach for the Bananas. Pye’s dream is to go to Jamaica and meet Sanka from Cool Runnings. His go-to karaoke song is Strawberry Wine by Deanna Carter, but admits he’ll only sing it because the ladies love it. His favorite MLB team is the Baltimore Orioles and his guilty pleasure TV show is The Fresh Prince of Bel Air, which he can admittedly sing the entire theme song. Pye also once got hit in the forehead on a fly ball.

Marty Barrington, a Massachusetts native, is in her first season coaching with the Bananas. She has coached high school softball for 4 years in Massachusetts. In her free time, Barrington loves to read, take pictures, and eat chocolate. Literally anything chocolate. However, key lime pie is her go to dessert. Barrington’s favorite restaurant in Savannah is PaPa’s Barbecue. She has 3 grandkids (shoutout Austyn, Peyton, and Emma). She was born and raised a Boston Red Sox fan so it only makes sense that her favorite player is Ted Williams.

Phill Shallenberger is the head coach at Cairn University in Philadelphia. This is his first year with the Bananas where he is serving as the catching coach. Coming from Philadelphia, Shallenberger is a fan of the Pittsburgh Pirates but thinks Philly cheesesteaks are overrated. He once won first place in a talent show doing a lip sync dance to a NSYNC song and is willing to do it all over again for the fans this summer. Although he likes to act tough and would never admit it to his wife or any of his friends, Shallenberger will never miss an episode of The Bachelor.

Errick Fox is currently the assistant baseball coach at Thomas University located in Thomasville, GA. This is Fox’s third season as the outfield coach for the Bananas. Fox’s guilty pleasure movie is Pitch Perfect, but not just the first one. You guessed it… all three of them. He has a twin brother and will absolutely jam out to any 80’s song. If he could be any ingredient on a salad, he would be ranch “cause I be dressing.” Fox once broke his leg during a game and had to be carried off the field. Thirty seconds later, however, Fox had miraculously popped his leg back on (no, he actually popped it back on… it’s a prosthetic) and was right back to it.

Tyle Hankins is the assistant coach at The University of Science and Arts of Oklahoma. This is his first season with the Bananas where he will be the infield coach. At the hospital, the nurse left the R off of “Tyler” on his birth certificate, giving him the name “Tyle.” Yes, like the type of flooring. Although Hankins is an Oklahoma native, he’s a New York Yankees fan. He played baseball for Gillum at East Central University, but now he likes to golf in his spare time. Word on the street is that he golfs like Phil Mickelson. Hankins has also been called the songbird of his generation.