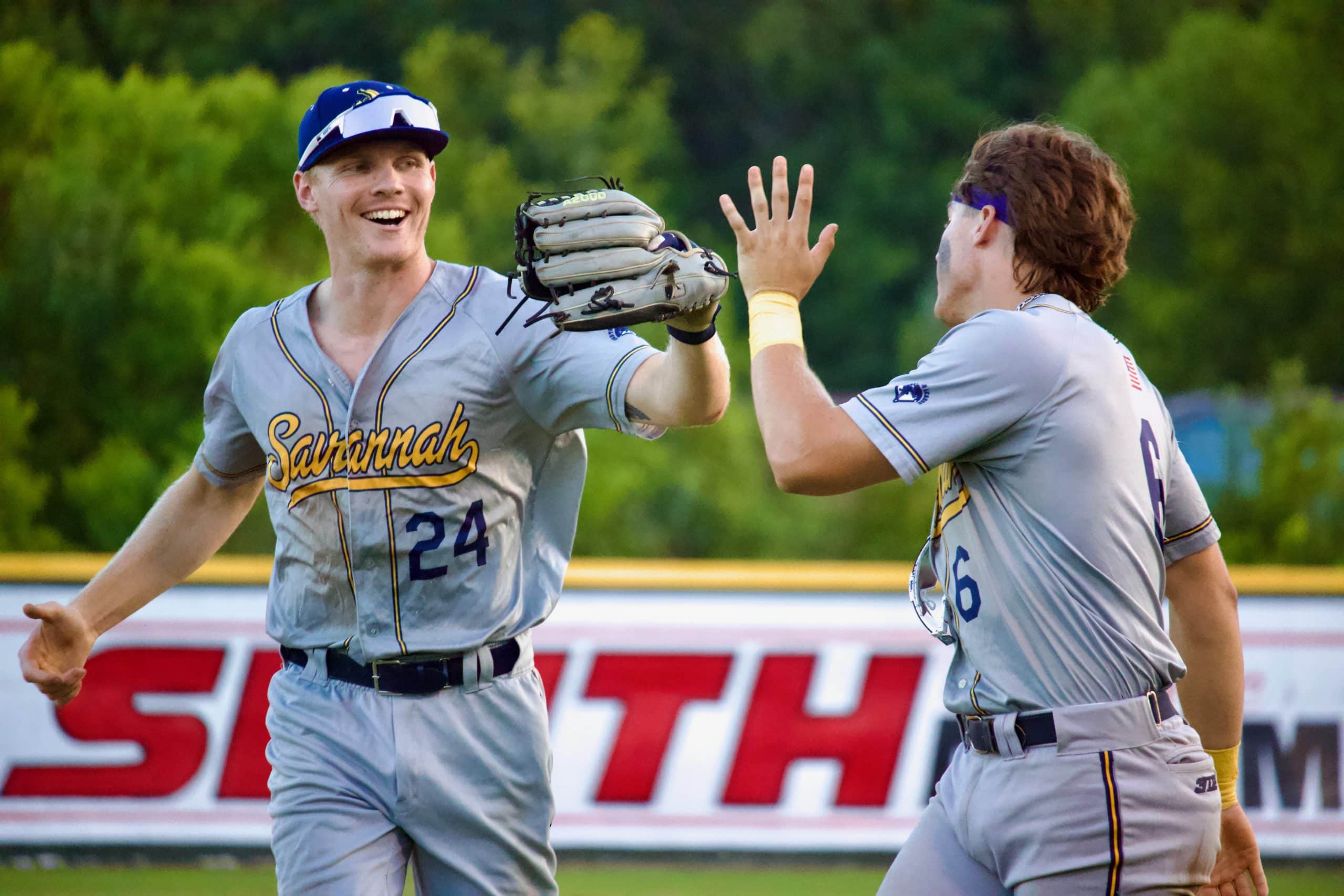 The Bacon went with Tyler, I Would Have Liked to Just Face the Bananas Twice, Rigot on the bump and the onslaught against him started with a seven-pitch walk from Brody, Mr. Late July and Early August, Wortham, who got to second on a passed ball and then stole third. Armando, You Don’t Need At-Bats to be Productive, Becerra, worked a walk as well and then moved up to second on another passed ball. David, Mr. Green Light Special, Meadows, bounced an infield single to deep short to bring in Brody and put the Nanners ahead 1-0. With runners on the corners again and Pearce, I Was Programmed to Mash Baseballs, Howard, at the dish Meadows took off for second and Pearce slapped a grounder to short that drove in Mando. Doc was on the move again on the next pitch and Ty, Tap Tap Taparoo, Jackson, dropped a bunt down that Rigot fielded and fired to first base in time to get Ty but Tyler, SEND IT, Gillum, waved DR around third and he slid head first into home plate ahead of throw from first to make it 3-0. With a healthy lead to work with, Juice, Joshua Lanham, Box, gave up a leadoff infield single but got help from his catcher Taylor, The Biola Bazooka, Justus, who snagged Jake, I Immediately Regret This Decision, Larson, trying to steal second. A flyout and groundout later and the inning was over. 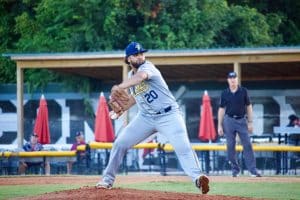 The boys went down in order in the top of the second and then Juice induced a 5-4-3 double play to erase another leadoff single in the bottom half.

Brody led off the top of the third by blasting the first homer of the playoffs for the Nanners out to left-center to make it four-zip. 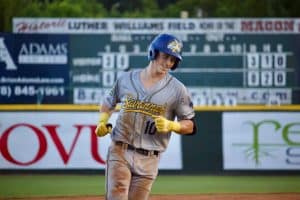 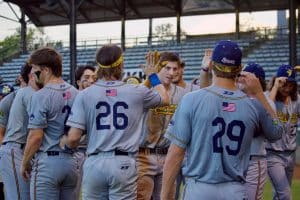 Mando followed the dinger up by smoking Rigot with a liner up the middle but unfortunately the southpaw helped slow the ball down enough for his shortstop Jack Larson to gun down Becerra. Although Armando was thrown out, this did mark the beginning of the prophecy that had been fulfilled five nights earlier of four straight barrels to follow a screamer off of Rigot’s person. Doc was the first to keep the faith alive as he laced a double off the wall in left-center. Pearce was next, lining a single so hard to right that Meadows couldn’t even score from second. Then Ty joined the party, smashing another double off the left-centerfield wall which brought in DR. 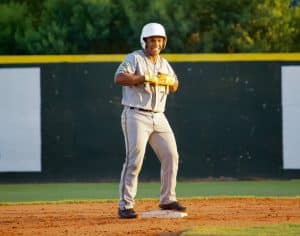 The finale of our destined outcome was a 103 mile-per-hour line drive to left from Indiana, See Ball Hit Ball, Stanley, that scored Howard and Jackson and made it 7-0 Savannah. In the bottom half, Lanham used yet another double play, this one 6-4-3, to erase yet another leadoff single and face the minimum through three innings despite allowing three base knocks along the way.

The fellas failed to score in the top of the fourth and the Bacon began the bottom half with a two-base error from Dylan, Remember When I Made the Number One Play on SportsCenter and More Importantly Secured the Splitsie for Best Defensive Highlight of the Summer, Kurahashi-Choy Foo to put Larson on second base. Mason, Prepare Your South Park Voice: “Mimsy”, Minzey, bombed a double off the centerfield wall to score Larson, making it 7-1. After a groundout and another single Gillum went to Nolan, Officially Trying to Win a Second 2022 Championship with the Bananas #DWTB #ESEF, Daniel, gave up a single and then got a 6-4-3 double play, the third DP in as many innings, to escape the bases loaded jam.

The Nanners went down in order in the top of the fifth and then Nolan gave up back-to-back singles and was replaced by Jestin, Two Innings Without Losing My Hat is a Miracle, Jones, in the bottom half. JJ struck out the first two men he faced and then got a fly to Ty in left to strand Nolan’s men on first and second. 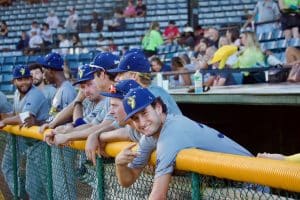 Jackson was plunked to begin the sixth and then with two down Justus ripped a double down the left field line that scored Ty to make it 8-2. BUT WAIT. The umpires gathered to discus the two-bagger and decided it clanged off a chair out of play and rebounded back into the field, so they put Ty back on third base removing the run from the scoreboard. In came JT, Jasmine, Rice, for Rigot, who got Jack, I Did Turn Two Double Plays and Smack a Double Today But You Don’t Wanna Mention That do You Biko, Renwick, to strikeout swinging. Jestin came back out for the bottom of the sixth and walked a pair while striking out three to put a cap on two scoreless innings of relief.

A single with two down from KFC was all the offense in the top of the of the eighth and then Bobby, Late to the Dance Party, McBride, came in for the bottom half. Bobby gave up a leadoff single and then used a K, popup and groundout to end the frame.

Renwick led off the top of the ninth with a double off the left field wall that I thought was a home run, (if I were president for a day I would make white advertisements on outfield walls illegal). Jack went to third on a grounder to short and came home on a sac fly to left from Mando to once again make it 8-2. 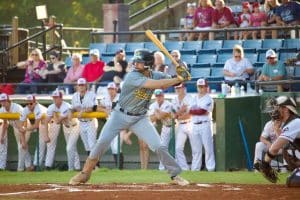 McBride came back out for the ninth and got a fly out (which marked the first time in the game Macon didn’t get the lead off man on-base), groundout, and then strikeout looking to send the Bananas to the CPL Championship.

If there were an MVP of the CPL Western Division Series it would Brody Wortham who went 5-9 with a home run, 4 RBI’s, 3 runs scored, and 3 stolen bases. 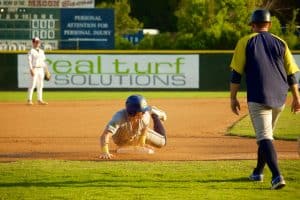 The best pitching staff in the league wasn’t half bad either, only allowing four earned runs across the two games while the offense provided 16 runs of support.

The Nanners now await the winner between the Morehead City Marlins and Wilson Tobs in the CPL Eastern Division Championship. The Marlins won in Big Rock Stadium Monday night 3-1, and venture to Wilson on Tuesday one win away from their fourth straight CPL Championship Series appearance.

If the Marlins win on Tuesday night, game one of the championship will be Thursday evening in Historic Grayson Stadium. If the Tobs win Tuesday and Wednesday night, then game one will be in Wilson on Thursday.

Thank you very much to Adam, It’s Actually Pronounced Prah-leen, Moreau, and Josh, Towelie Can’t Wait for the Championship, Talevski, for their help with our nicknames tonight.

I will leave you with these two things: 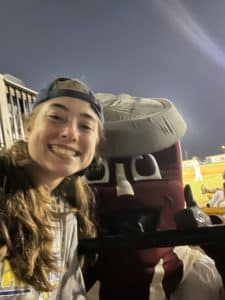 Honestly a terrifying picture of the Bacon mascot for me. He looks like he’s up to no good behind that railing. I think it’s the combo of the thumbs up in black gloves and that dark abyss of a mouth he’s got. Nightmare fuel.

And lastly of course, your CPL Western Division Champions… 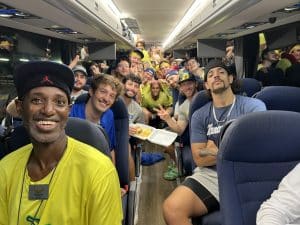