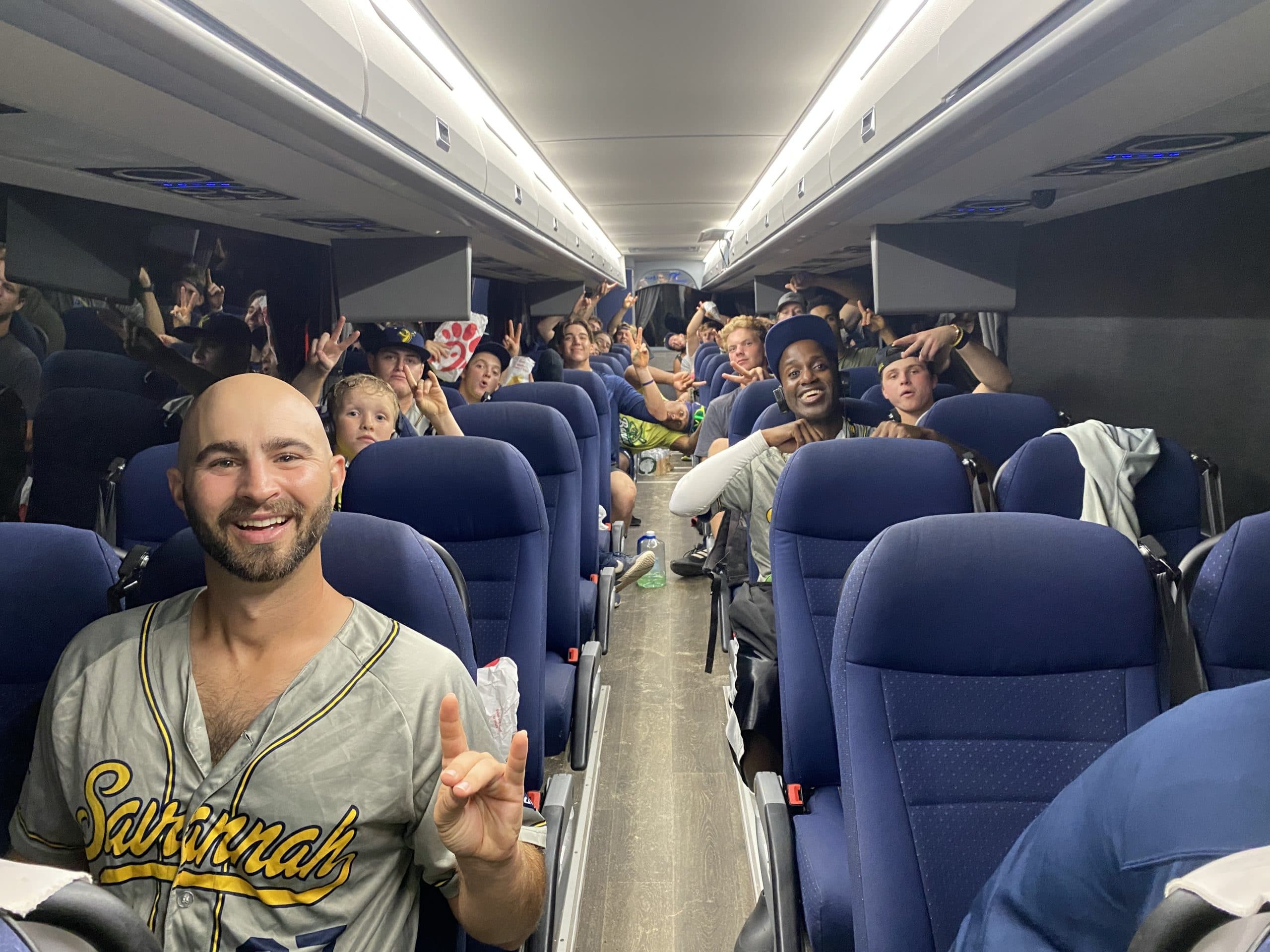 The Nanners hammered Lexington County 12-5 on the road, improving to 11-3 in the second half and 30-6 on the summer (15-3 both at home and away, for all those who think Grayson Stadium is such an unfair place to play).

It all started with a Jesse, “Who Says Chicks Only Dig the Long Ball?”, Sherrill, bouncer over the pitchers mound for an infield single, (and does it not always start with a Jesse Sherrill infield single). Livan, I Actually Think the Ladies Enjoy Dingers More Than Infield Singles, Reinoso, rocketed a two-run homer 333 feet out to right field. 2-0 Bananas two batters into the ballgame. With one out, Eduardo, I’ll Give You My Leftovers if You Shout Me Out on the Broadcast, Malinowski, lined a base hit up the middle and Bryson, Red Light Special (Not His Fault Though), Bloomer, bounced a single through the left side. Bill, Insert Your Own Walk Pun Here, Knight, walked for only the 7th time in 76 plate appearances this summer, to load the bases. With Zane, To the Left Now Y’all, Denton, at the dish, Eduardo came in to score on a wild pitch and then Zane worked a walk to re-load the bases. Nick, The Selfless Assassin, Clarno, came through with his CPL leading 5th sac fly of the summer, to bring home Bryson from 3rd.

With a 4-0 lead to work with, Ryan, Sick Bloopers Bros, Kennedy, gave up a bloop double down the left field line and then a bloop single to right, which lead to only his 3rd earned run given up on the summer. An unearned run would come in as well, and the Bananas would leave the 1st inning with a 4-2 lead. After 1-2-3 half innings by both teams in the 2nd, Eduardo got the 3rd inning going with a hard groundball through the right side. Bryson and Bill walked, and Clarno stroked a grounder through the left side to bring home Eduardo. Drew, Be Careful When You Call Me Stainer, Yniesta, smoked a two-run single up the middle, bringing home Bryson and Bill. Jesse actually flirted with a homer, lining a sac fly deep to right field to bring Clarno across the dish. Livan had no intentions of flirting, as he blasted his second two-run home run of the game 370 feet to right-center to make it 10-2 Bananas. With his second two home run game of the summer under his belt just 3 innings in, Eduardo asked Livan if he planned to hit another, to which Livan said, “I don’t know, if I feel like it I guess.”

It was really just a tune up start for Ryan Kennedy, so he only went 2.2 innings, giving up 2 runs, 1 of them earned, and striking out 5 Blowfish hitters. His ERA went up to 0.81, still the best among qualified CPL pitchers. Quinn, It Takes Two to Make a Thing Go Right, It Takes Two to Make it Out of Sight, Mason, came in with 2 on and 2 out and threw 2 pitches, getting a groundout on his second toss to end the inning. Lexington County pushed 3 runs across in the 4th, causing Tyler, Dressed to Impress, Gillum and Corey, Gillum Looks Even Spiffier Than He Did on His Wedding Day, Pye, to bring in Andrew, I Hope You Enjoy Your Time on First Because it Will Not Last Long, Armstrong. Andrew did what Andrew does, and picked off his 5th runner in just his 8th appearance of the summer. The Seminole then tossed 3.2 hitless innings of relief, while striking out 5. His efforts earned him the CPL Pitching Line of the Night, although the official scorekeeper did credit him with Cole Kitchen’s first inning of relief.

Tonight's Lines of the Night go to Livan Reinoso and Andrew Armstrong of @TheSavBananas.

“I felt great,” Andrew said. “I just felt like all my pitches were working tonight, and I also appreciate the CPL giving me an extra inning and 2 of Cole’s strikeouts.”

The Bananas brought home 2 more runs in the top of the 8th inning, as Eduardo and Bryson both singled and scored, each for the third time on the evening on both fronts. A wild pitch scored Eduardo and a bases loaded walk from Clarno pushed home Bryson. Then Cole Kitchen, came in and tossed TWO innings, while striking out THREE.

The game was a wild ride from start to finish, as the boys battered the Blowfish 12-5. It was a rollercoaster for me in the booth too, as I was joined multiple times by assistant coach Riley, “Wait, is Coach Still in My Title?”, Wooten, as well as once by Tom, “Good for You, You Look Happy and Healthy, Not Me” @ Nathan Dettmer, Vincent, and Bill, The Only Thing Left is for Me to Wear the Yellow Tux, Leroy. Tom certainly found a stable new partner as we had a blast together in the booth, but Bill had a highlight of his life, as he was dabbling in the fine art of play-by-play broadcasting and got to call Livan’s second homer…

Highlight of the night for the Bananas as well as @bleroy28, who made his play-by-play debut and nailed the call on Livan Reinoso’s second home run of the game! Just pure joy in the booth! pic.twitter.com/2o4v8es2MC

“It was an amazing experience, and there was no home run I would rather call than Livan’s second of the day. That thing sent my heart racing and now I really can’t wait until the next time I get the opportunity to share a booth with Biko.”

The feeling is mutual my friend! But honestly, and those who watched the broadcast tonight can attest to this too, Bill showed some serious play-by-play chops for the few innings he was up there with me. Could be a little more broadcasting in the future for the four-year Banana!

Our official Nanners Offensive Statlines You Should See of the Night, are:

All in all, it was quite a fun night for the guys, who now enter the final 8 games of their season with a 3 game lead over the Pilots for home field advantage throughout the playoffs. The fellas return home tomorrow to take on the Spartanburgers for the final time this summer. You know the drill by now, but just incase for some reason you don’t actually know the drill, pregame will start at 6:30 and first pitch will be at 7:00. And a reminder for those who may not have read the story where I gave Adam, “I’m Actually Gonna Become a Really Good Dancer”, Moreau, a shoutout for all his help on these away game story nicknames, but he literally at least deserves 50% credit for every nickname I write in here. So props to the Bananas, not close to as good a dancer as Maceo but is still more than happy to bust a move, first base coach, Adam Moreau. I know you have a joyous time helping me devise these nicknames, but I really appreciate the help and wouldn’t have half the quality of content without you!