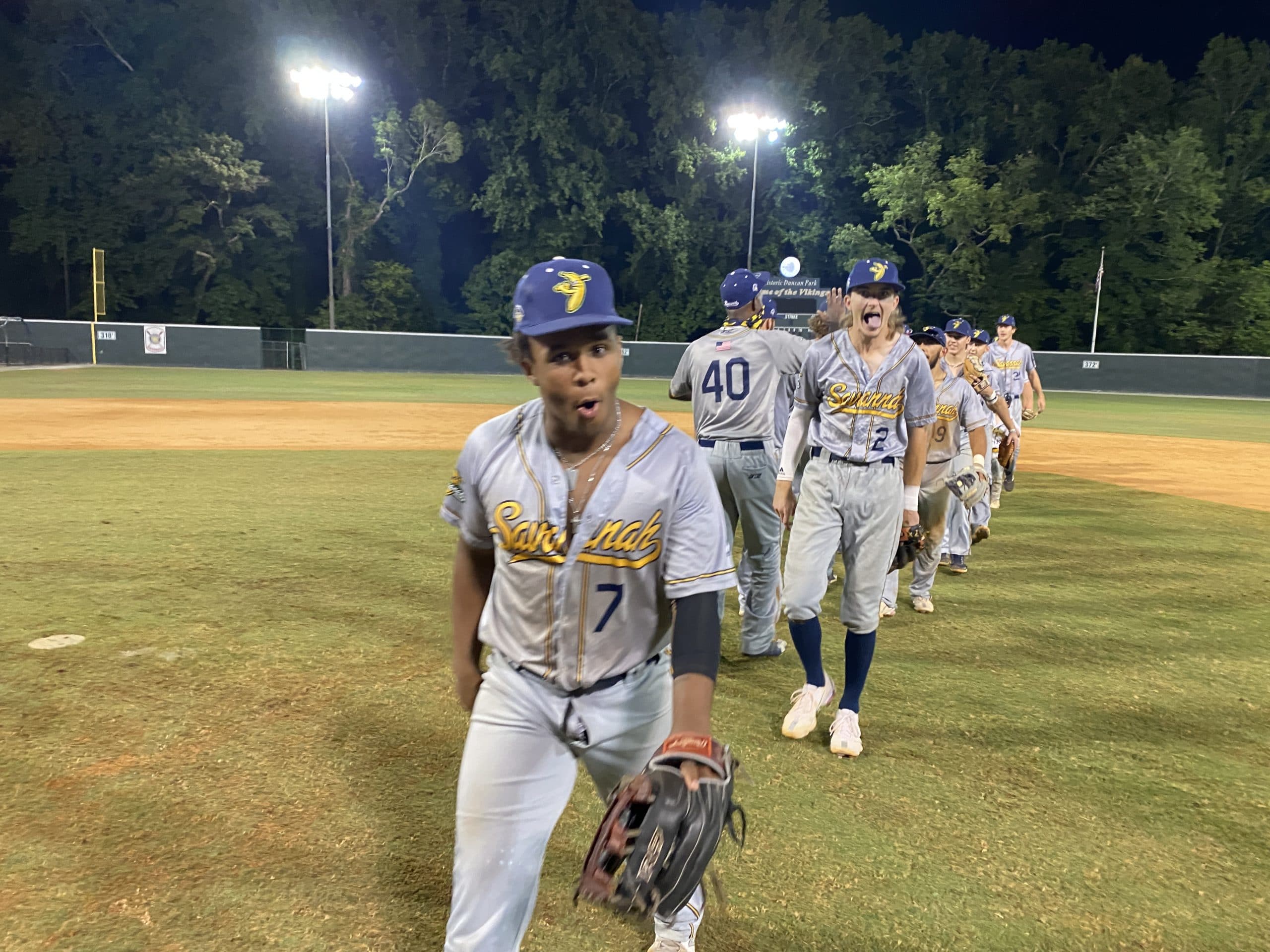 The Bananas took to the road and grilled the Spartanburgers 5-3 to improve to a CPL best 14-1 on the season.

Because of wicked traffic, the journey up to Spartanburg that was supposed to be 4 hours long took nearly 7. When the Bananas finally got to Historic Duncan Park it was 5 minutes from game time. The start was pushed back a half an hour, not quite long enough for me to fully setup my whiteboard broadcast, but evidently just enough time to get a starter ready to roll. Tyler, I want my Trackman stats and I want them now, Gillum, and Corey, I’m the best pool player in Barrel House South, Pye, turned to the man with the most recognizable tush on the roster, Nathan Dettmer, on the mound.

The freshman out of College Station escaped a sticky situation in the 1st inning with 2 guys on and nobody out and then put the Dett-Mobile in cruise control for the rest of the night. Besides a hit batter with two outs in the 2nd inning (who was gunned down trying to steal second by Nick, I will out heckle any heckler trynna heckle my boys, Clarno), nobody reached base over the next 4 innings, with Nathan retiring the last 9 Burgers he faced in order.

Clarno got the 3rd inning going with a sharp single up the middle and came in to score on a Jesse, OOO-AAAH-AAAH-AAAH-AAAH, Sherrill, liner back up the shoot. Cole, when I say I’m gonna do something, I do it, Kitchen, scored on a Livan, I’m not talking to my bro Dayan after he snagged my liner, Reinoso, bouncer to short that was thrown into the Bananas dugout.

Bryson, I grew up in a redneck family, I know gunshots when I hear them, Bloomer, tattooed a double to left center, got moved over to third on a grounder to 2nd from Drew, I wish this counted as a sacrifice, Yniesta, and then was driven in on a grounder to short from Clarno. Just beautiful situational hitting from the 2 second year Nanners.

With 2 outs in the 6th Drew worked a walk and then Clarno peppered a laser off the left field wall for a double, driving Drew in. Ty, I wear a white and black sock on opposite sides from my white and black hair, Jackson, lined a double down the right field line to drive in Clarno and give the guys a 5-0 lead.

In the bottom of the 6th the Nanners turned to Andrew, I’m just here to hit my spots, Armstrong, and the southpaw tossed 2 scoreless frames, (with an assist from Clarno who picked a cat off first base), while striking out 4 and only giving up 1 hit in his Bananas debut.

Matthew, I’ll respond to any nickname referring to a Biblical figure, Steidl, got 2 quick outs but gave up a tough 10-pitch walk and then a 2-run homer to Spartanburg’s best hitter this summer, Kyle Jenkins. Steidl finished the inning with his 2nd K, and the Bananas turned to Jakob, I threw a perfect game in high school without knowing it, Barker, for the save in the 9th.

After a strikeout, Jakob gave up his first hit of the season in his 7th inning pitched on a grounder that Jesse Sherrill nearly made an insane play on in the 3rd base hole. Barker gave up his second hit of the season on a blooper to left that Bill Knight almost made an incredible diving play on. He then clipped a batter with his curveball to load the bases and struck out the next man looking on a slider. With an 0-2 count he fired a fastball to the backstop for a wild pitch, bringing in a run to make it 5-3, and pushing the tying run to 2nd base. He came back with a curveball just above the zone and felt some discomfort in the back of his arm. Gillum immediately took Jakob out of the game, with the flamethrower’s health obviously being the number one priority for the coaching staff. With Jakob icing his arm in the dugout, Dylan, I’m not rushing this warmup no matter how many drunk Spartanburg fans holler at me that I’m taking too long, Cunningham, took his time warming up on the field, as he hadn’t been lose at all when Barker left the field. After a foul ball, DC missed with 2 fastballs just above the zone to load the bases, putting the winning run on 1st. With Barker outside the dugout screaming for Dylan to lock the game up, shortstop Matty Brown worked his way to a 2-2 count, and then got his doors blown off by Cunningham’s fastball, securing the 5-3 victory for the Bananas.

It was certainly bittersweet, as the Nanners improved to 14-1 on the season winning a nail biter in Spartanburg, but Jakob Barker’s right arm lived in everyone’s thoughts as well. The man has been basically superhuman for the Bananas throughout their incredibly dominant run to start the summer, as he finally gave up 2 hits (2 very weak ones at that), 7 innings and 15 strikeouts into his season. He has come in to strand numerous runners in multiple high pressure situations already, and is just an awesome, quirky guy to be around off the diamond. We’re all hoping it’s nothing serious, and I’ll update the Bananas world as soon as we have more info.

Of course, a major bright spot on the evening was Nathan Dettmer’s 5 innings of 1 hit, 1 walk, 1 hit batter, and 6 strikeout work, earning him the CPL line of the night for pitchers.

“I felt really good out there tonight,” Nathan said, “It was definitely tough early cause the bus got there so late so I barely had time to warmup but I loved taking on that challenge and ended up feeling great once I got going.”

Nick Clarno led the offense with a 2-4 performance, driving in 2 runs and scoring 2 as well.

The Bananas return to Historic Grayson Stadium tomorrow (I guess today technically at this point… we’ll settle on Saturday as the best way to describe it), as the Spartanburgers come down to do battle once again. The pregame show will start at 6:30 eastern, and with the internet going out in the top of the 3rd and never returning tonight, destroying both broadcasts in the process, it is going to feel a little extra amazing to have my BTV crew and all of our trusty technology at hand.

The Bananas are 14-1, closing in on the first playoff bid in the CPL, and crushing opponents every step of the way! The ride continues mañana!