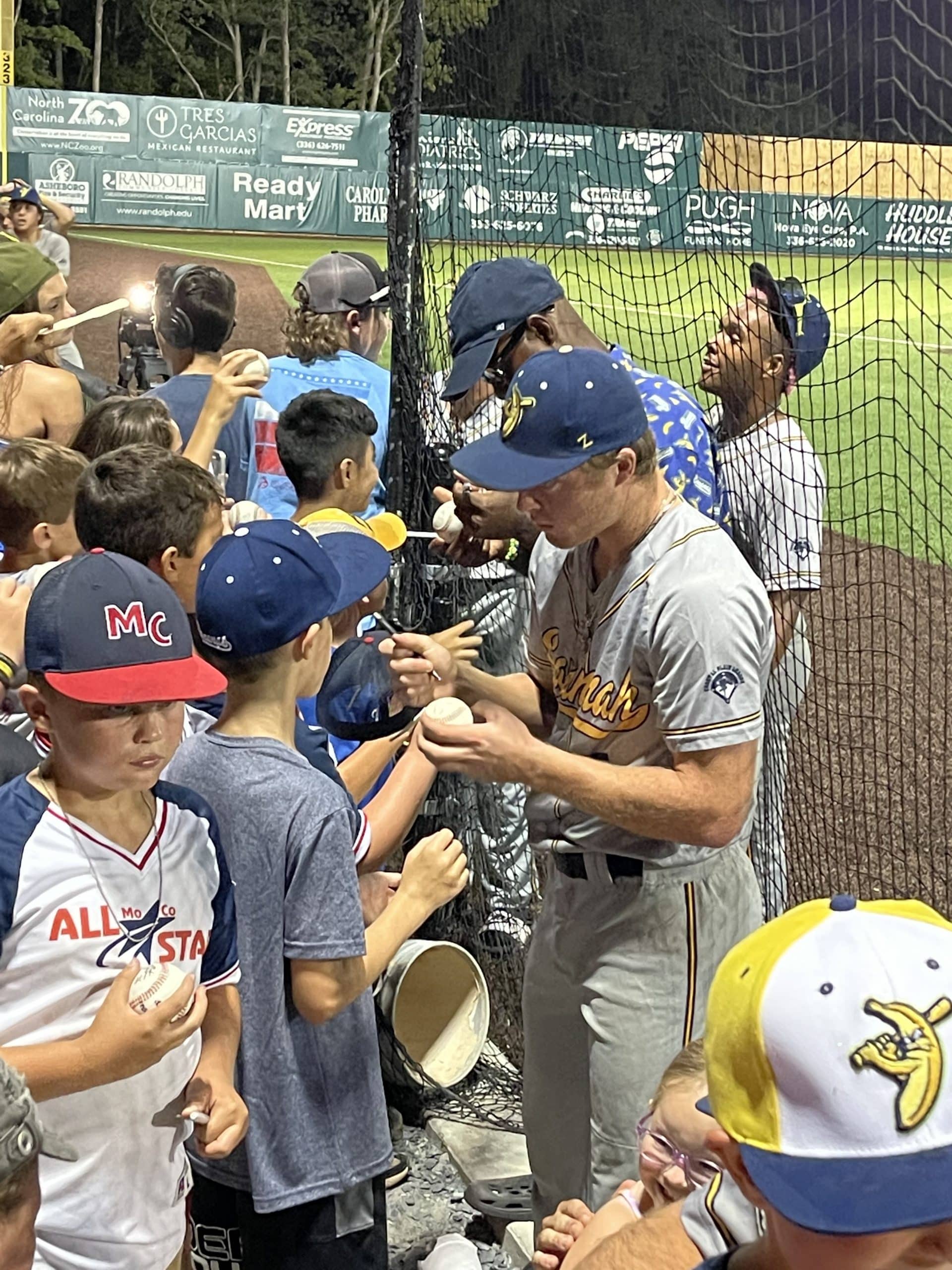 Written by Biko, We’re Not in Forest City Anymore, Skalla

The Nanners took it too the Ashville ZooKeepers in what was a great game through eight innings before the boys erupted for seven runs in the top of the ninth.

John, What a Way to End My Summer, Owen, tossed a 1-2-3 top of the first inning. In the bottom half, Jared, You Won’t Like Me When I’m Angry, Donalson, gave up a solo home run to Trent, That Oughta Be Enough Offense for the Night, Youngblood, on the first pitch of his night. Donny then struck out the next three batters swinging and left the mound shaking his head in disgust because of his first pitch of the evening. 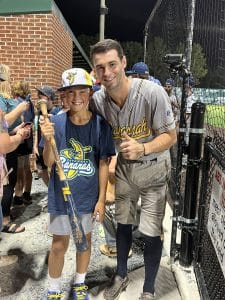 The fellas went down in order in the top of the second and Jared gave up a single on the first pitch of the bottom half before striking out the next three guys swinging.

Indiana, A Quart of Milk Will Not Be Enough Tonight, Stanley, lined out sharply to left to start the third and then Brody, The Buck Stops Here, Wortham, shot a groundball through the left side to breakup the perfect game four innings earlier than it had been broken up a night earlier. Danny, They’re Trying to do Me Dirty, Gutcher, worked a walk and then Jack, I’ve Got Way More Where This Came From, Renwick, smoked a ball through the six-hole to drive in Brody and tie the game at one run apiece. In the bottom half, Donny picked up his seventh strikeout, got an excellent running catch in left-center from Armando, I Was Just Happy to Finally Get a Ball, Becerra, and then after a walk Jared induced a fly to right. 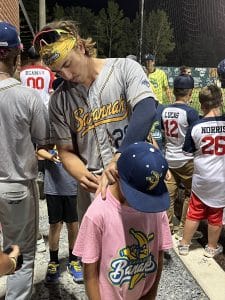 The Nanners got a couple guys on in the fourth but nothing from it and then Donalson struck out the side in the bottom half.

Danny led off the top of the fifth with a booming triple off the left field wall that knocked Owen out of the game. In came Danny, Bradley, Beal, who gave up an infield single to Jack and then a bunt single to Mando to load the bases. Beal picked up two immense K’s but with two away Ty, You Can’t Ban This Gum, Jackson, lined a single to right-center to bring in Gutcher and Renwick to give the Bananas their first lead of the night 3-1. In the bottom half, Donny gave up a single and then a sac bunt before striking out two more ZooKeepers to end his night. Donalson would go five innings of one-run, three-hit, one-walk, and twelve-strikeout ball, becoming the first Nanners pitcher to reach double digit K’s on the summer. 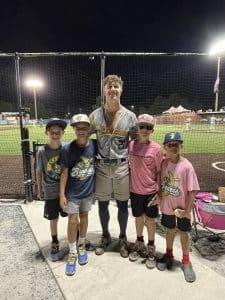 The fellas went down in order in the top of the sixth and Tyler, Of Course We’re Also Stopping at Buc-ee’s on the Way Back, Gillum, and Corey, I’m Gonna Need More of Those Butter Toffee Peanuts, Pye, went to Dylan, The Good Thing About Being Fat is You Can’t Get Tight, Cunningham for the bottom half. DC got a flyout and then gave up a single before getting a 6-4-3 double play to end the frame.

Jack led off the top of the seventh with a liner to left for his third knock of the night and he promptly stole second. With one down, Bryce, The Flare Master, Madron, looped a single to left-center to score Renwick and make it 4-1 Savannah. Cunningham came back out to get a pop out, strikeout, and lineout for a 1-2-3 bottom of the seventh. 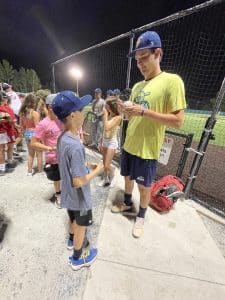 Indy and Brody both walked and then double stole but were stranded on second and third in the top of the eighth. Max, You Guys are on the Verge Man, Bergmann, came in to strikeout the first two ZooKeepers he faced before going up against his former high school foe Trent Youngblood and getting a spectacular diving catch from Ty in left to complete the perfect frame.

Mando popped out to start the ninth and then Bryce worked a walk, stole second, got to third on a throwing error from the catcher and came around to score when the centerfielder didn’t handle the backup cleanly. It was the second three-base steal of the summer, as Madron joined Meadows who did the same in Lexington County back on July 7th. The aforementioned DR walked and stole second himself, to make it a perfect 20 for 20 in stolen base attempts in 17 games played. Insane. Ty bounced an infield single into the 6-hole that would have scored Doc if not for a tremendous diving stop by Youngblood at short. Bryson, The Blooper, Bloomer, looped a single to left-center to bring home Meadows making it 6-1. Indy followed that up with a rocket deep the opposite way that tipped off the right fielder’s glove for Stanley’s league-leading fourth triple as Jackson and Bloomer scored to make it 8-1. Brody then bounced a ball to short that Youngblood couldn’t handle cleanly allowing Wortham to reach while Indiana crossed home. Danny pulled an infield single down the third base line and then Jack tapped an infield single up the middle that was knocked down by the second baseman to load the bases. Armando worked a walk to push home Brody and then Bryce bounced a ball sharply to second to score Gutcher making it 11-1. After waiting around for twelve of his teammates to hit in the top of the ninth, Max came out for the bottom half and got another great play from Ty, this time up against the left field wall, and then two more K’s to end the ballgame. 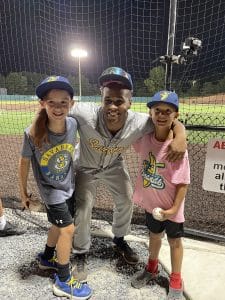 The Nanners notched their eleven runs on fourteen hits as the offensive outburst was powered by the leadoff man Jack Renwick who went 4-6 with two runs scored, an RBI and a stolen base in the victory. Savannah once again rode excellent pitching to their fourth straight win, with Donalson, Cunningham and Bergmann combining for 17 strikeouts while allowing only four hits and one walk.

The guys are 33-12 on the summer and 14-7 in the second half, 2.5 games ahead of Macon and Forest City in the second half standings with just three games to play. That means the second playoff spot for the CPL West will most likely belong to whoever has the second best record overall where the Bacon currently have a one-game lead over the Owls and the HiToms. The problem for Macon is two of their final four games are against the Bananas, who have beaten them 14 out of 16 times this summer. It’s going to be a wild finish. 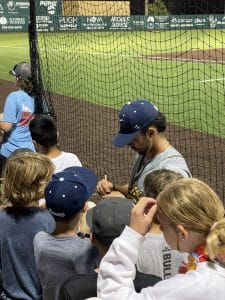 The fellas have a day off tomorrow, then the Bacon at home on Wednesday, travel to Macon on Thursday, another off day on Friday and the Sharks come to town on Saturday to put a bow on the regular season. As Josh, Father John Splitsie, Talevski, and I discussed on the broadcast tonight, we’ll have the first annual Splitsie Awards on Saturday’s broadcast. The voting will be conducted by Bananas Insiders, coaches and players, and Bananas front office staff for the fourteen awards. If you would like to have your voice heard in the most important award show of the century, you can join Bananas Insiders here. There will be a secret fifteenth award that can only be voted on by tuning into the broadcast Saturday night on Bananas Insiders and voting in the chat. I cannot properly explain how excited I am for this awards show.

Enjoy the day of rest tomorrow, we’ll be back in action on Wednesday night with a 6:30pm eastern pregame show and first pitch at 7:00 on Bananas Insiders. 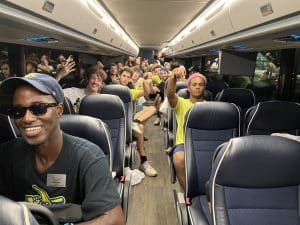