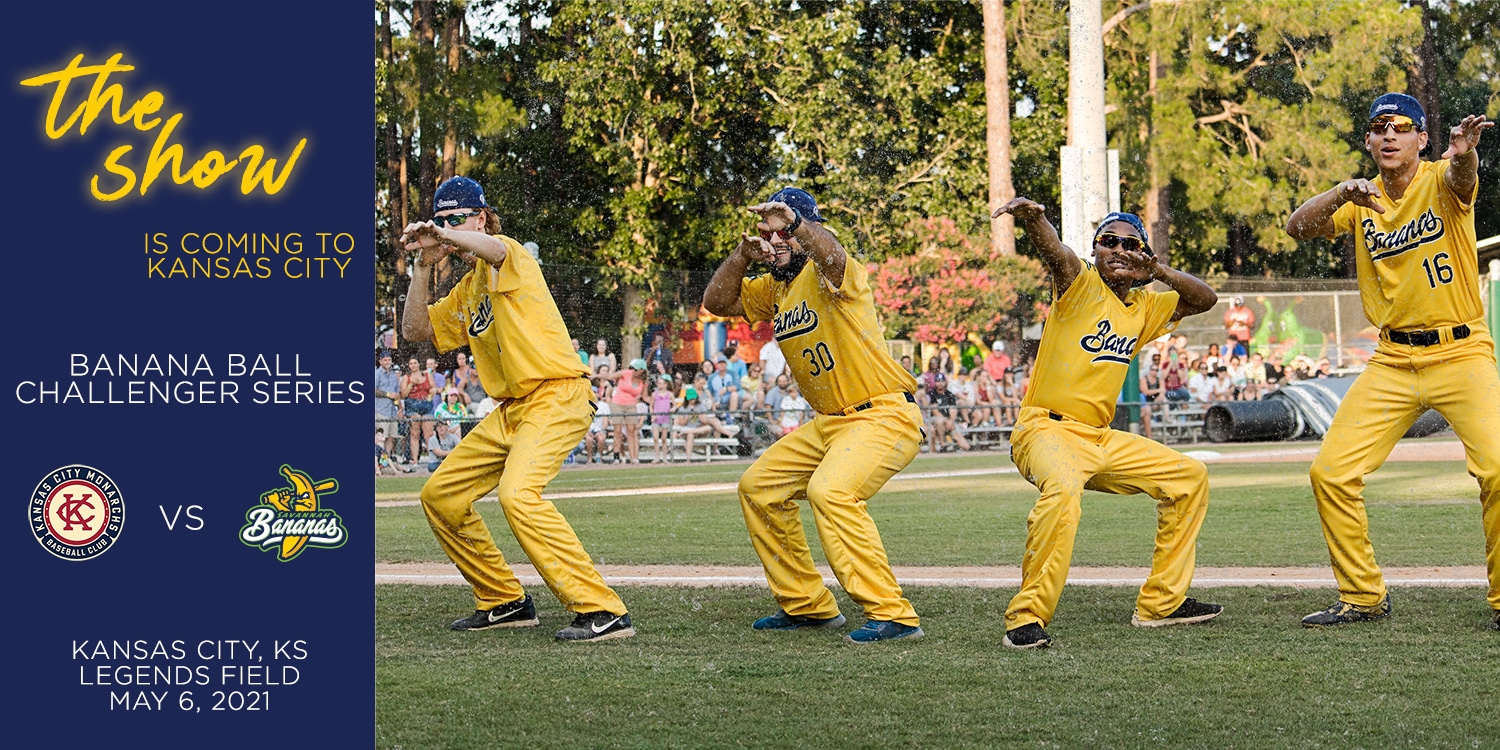 The Savannah Bananas are bringing their world-famous baseball circus to Legends Field on Friday, May 6, 2022. Affectionately referred to as ‘The Greatest Show in Baseball’ (ESPN SC Featured, August 2021) with an atmosphere that would ‘…make most MLB teams jealous (Sports Illustrated, June 2019), the Bananas have reimagined what it means to experience a baseball game. After selling out back-to-back nights in Mobile, Alabama during the 2021 One City World Tour, the Bananas will take the show farther than ever before in 2022.

The 2022 Banana Ball World Tour received thousands of nominations from fans in over 400 cities and 18 countries. Those nominations were narrowed down to Chicago, Columbus GA, Mobile, Kansas City, Durham, Birmingham, Montgomery, West Palm Beach, Daytona Beach, and Charleston as the top ten front-runners. After the team visited Legends Field and met with local officials, it became obvious that Kansas City should become an official stop for the 2022 Banana Ball World Tour.

“We were blown away by the Bananas fans who nominated their cities. We were just getting started in 2021, so buckle up for the most fun team in baseball in 2022, said Jesse Cole, Bananas Team Owner. “After visiting with our front-runners, we’re thrilled to be able to come to Kansas City for this challenge,” he continued.

In addition to the cast of characters, dancers, performers, mascots, and musicians, the Bananas are bringing their own twist of baseball to Legends Field. Banana Ball is a fast-paced, action-packed style of baseball with rules that include no bunting, no walks, a two-hour time limit, fans catching foul balls for outs, batters stealing first base, and a one-on-one tiebreaker showdown at the end of the game. Banana Ball has been featured in stories on ESPN, Baseball America, Wall Street Journal, the Boston Globe, and more.

The Bananas will face off against the Kansas City Monarchs. The Bananas will bring a team full of independent players who have been scouted, tried out, and signed contracts for the 2022 Banana Ball World Tour. The Bananas have already signed two Bananas legends, Bill Leroy and Kyle Luigs. Leroy went viral on social media for introducing himself to bat and was called ‘The Future Face of Baseball’ by Barstool Sports. In addition to these players, the Bananas will have surprise player guests in each stop of the tour.

When the Savannah Bananas are not on tour, they play their home games in front of a sold out, 4,000 person crowd at Grayson Stadium in Savannah, Georgia. Bananas games at Grayson Stadium have been sold out for five straight years and fans join a 10,000 person waiting list with the hopes of securing tickets. The team has been featured across the globe for everything from playing a game in kilts, using a Dancing First Base Coach, the Banana Nanas Dance Team, the first ever baseball player to wear stilts, a Banana Pep Band, breakdancing players, and more.

Fans who want the opportunity to see the 2022 Banana Ball World Tour at Legends Field should visit www.thesavannahbananas.com/worldtour and join the Ticket Priority List or to get information on outings for their group, organization, or business.