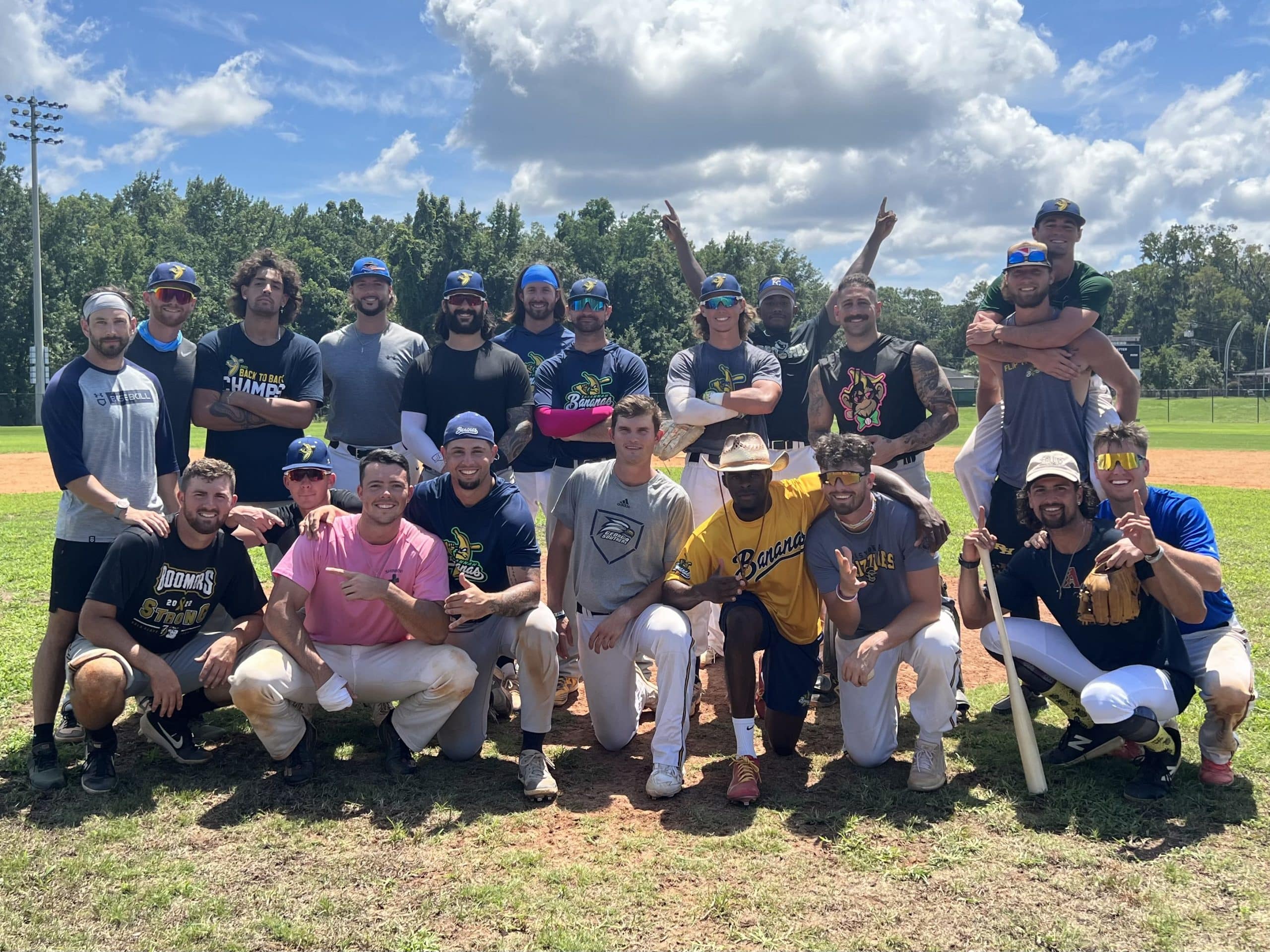 Written by Biko, Don’t You Dare Step Out of the Box, Skalla:

Although we don’t yet know who will be Bananas and who will be Party Animals, we do know a good bit about the guys who will be split between the two teams. That certainly offers an opportunity for roster speculation when it comes to if fellas will be wearing yellow and white or pink and black, but I’ll leave said speculation in the hands of you the fans.

It would be foolish to start anywhere but with Bill LeRoy and Kyle Luigs, the twin princes of Bananaland. Bill and Kyle spent four years as collegiate Bananas, tied with Ryan Kennedy for the franchise record. The starting catching and pitching duo spent four and a half years together at the University of North Georgia, helped bring a CPL Championship to Savannah in 2021, and then were the faces of the 2022 Banana Ball World Tour.

I mean what more could you ask for?? While mic'd up on the broadcast with Biko & Bill, Kyle Luigs sends an absolute bomb over the right field wall. pic.twitter.com/YCuaEJyxha

Just call him Bill "Clutch" LeRoy.@bleroy28 hits a missile to tie up the fifth inning. pic.twitter.com/QphSnhn9MJ

The battery mates are joined by two fellow 2021 Petitt Cup Champs, Dan Oberst and Matt Malatesta. Dan spent three years demolishing baseballs as a collegiate Banana, culminating in an insane 2021 campaign where he hit .333 with a .404 OBP, 32 runs and RBI’s in 32 games played, all while swiping 25 bags in 27 attempts. The 2021 Gulf South Conference Player of the Year at the University of West Georgia led the 2022 Banana Ball World Tour with his .440 batting average. Malatesta was a late addition to the 2021 CPL team who had an excellent regular season start and then dazzled in 2.2 innings of scoreless relief in the decisive game 3 of the Championship game. The splitter specialist was the closer for the Bananas across the World Tour this past spring.

Nobody does it like @dansbyoberst does it. He shredded his own walkup song on Guitar Hero last night and then stole first base. pic.twitter.com/BsIscoOuQJ

A pair of 2022 CPL Champs are joining the fold too, with David Meadows and Pearce Howard coming aboard. DR joined the team halfway through the summer and excelled in Tyler Gillum’s Green Light Special base running system unlike anyone before him. Stealing 26 bases in 26 tries in just 20 games played, Meadows was instrumental in the Bananas winning their second straight CPL Championship. Pearce got to Savannah with one week in the regular season left and the all-time hits and RBI’s leader for the University of New Orleans fit right in. The goofy left-handed bat ended up being the cleanup hitter throughout playoffs for the Petitt Cup Champs.

DR Meadows walks it off for a storybook ending!! pic.twitter.com/kyWb93ny1R

A pair of 2019 Nanners have returned for the fun, with Austin Thompson and Toi Moyer taking their talents back to Bananaland. Thompson hails from Rincon, Georgia, and just finished up an impressive five-year career at Georgia Southern where he was the starting shortstop. Moyer spent two years with Tyler Gillum at South Mountain Community college before transferring to San Jose State. Toi was a integral part of this summer’s coaching staff and is ready to take his catching gear from the bullpen to behind the plate in Grayson.

A host of pro Bananas are back and better than ever. The songbird of our generation, Dalton Mauldin, who started his Bananas career in the 2021 Breakfast Bowl and then started at second base for the Nanners in every World Tour game. His counterpart in the middle infield Ryan Cox returns as well, and the pride of Pennsylvania has plenty more tricks up his sleeve at shortstop.

The fun doesn’t stop there, as we’re also bringing back:

Malachi Mitchell: “FlashThaKid”, AKA “The Fastest Man in Baseball” is a two-time World Tour Banana and 2021 Breakfast Bowl Banana.

We never want the Harlem Shake to die. And that's exactly why we had our whole team do it while Malachi Mitchell (@oppotaco11) walked up to the plate. pic.twitter.com/JDe2nIkDnS

Jacob Teston: Known by most as a “Walking Barrel Party,” Teston was a 2020 and 2021 Breakfast Bowl Banana while going to the dark side for both World Tours.

Christopher Vasquez: “Vazzy” was a 2019 Summer Splash Banana, 2020 Fansgiving Banana, and has played in both Breakfast Bowls and World Tours as a Banana.

Mike Vavasis & Jansen Neff: “Vava” and “Vegas” are both two-time Breakfast Bowl Bananas and 2021 Party Animals. Mike ran it back with the Party Animals this spring while Jansen switched over to the Bananas.

Y'all ever seen someone groove this hard coming up to the plate?

Mike Vavasis with the hips groovin' so hard even the pitcher and umpire are getting into it. pic.twitter.com/9gX3Azr1En

What a way to win the inning. We're tied up with a 2-2 ball game folks! pic.twitter.com/V1sUWJ8xf1

Chase Achuff: A 2021 Collegiate Banana who made the World Tour team last spring but couldn’t play due to the possibility that it would mess up his collegiate eligibility.

We’re beyond fired up to have so many of our favorite Bananas and Party Animals back for the Banana Ball Summer Series. Stay tuned for the full roster announcement later this week where you’ll find out how these guys have been split up and who else is getting in on the fun!