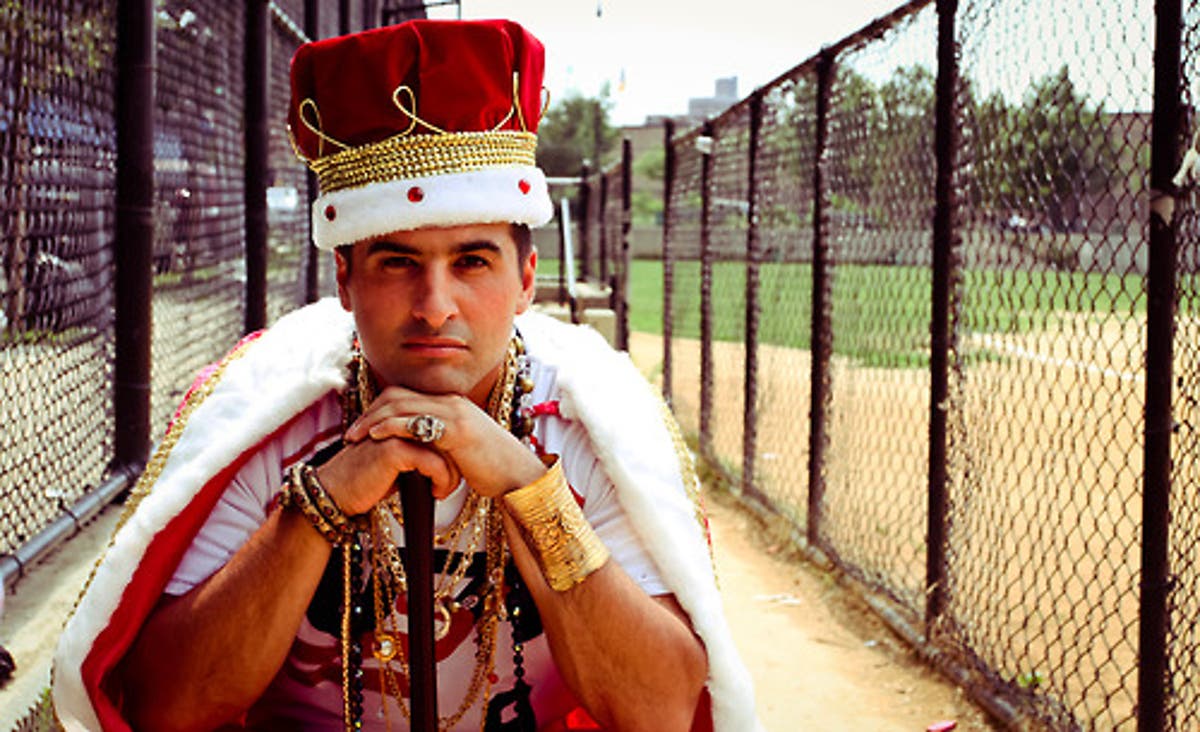 Nate Fish, the King of Jewish Baseball will Manage the Bananas Premiere Team

“Tyler (Gillum) told me he has a guy who is perfect for the position,” team owner Jesse Cole said. “He said that Nate’s an amazing baseball guy and he’s Bananas through and through. He’s got tons of baseball experience and he understands the show element of it all.”

Gillum has been at the helm of the Bananas since 2018, and it’s hard to imagine a better fit for the job. The summer before he came to Savannah, Gillum was an assistant coach on the Yarmouth-Dennis Red Sox in the Cape Cod Baseball League, working alongside Fish.

“I consider Fish to be the most interesting man on the planet,” Gillum said. “It just seems like he’s lived 10 different lives. He’s a very creative, artistic guy with his own publishing company, he does a lot of writing and a lot of painting. He’s like a nomad who’s jumped around all over the place mostly going wherever baseball takes him. He really just beats to his own drum.”

Gillum’s not exaggerating at all, Nate’s journey through the world of baseball has literally taken him around the world. He’s played professionally in Germany, Puerto Rico, Argentina, the Dominican Republic, and Israel. A native of New Hampshire, Nate moved to Cleveland when he was 12 and stayed in Ohio for college, playing four years of baseball at the University of Cincinnati where he was great friends with 3-time All Star and 2-time World Series Champion, Kevin Youkilis. He went to the New School in New York City to finish his degree in writing once his baseball eligibility was up.

“After I got my degree I just started coaching because I didn’t know how to do anything else,” Fish said. “I started hitting a lot and thinking about the game differently. I actually put my foot on the pedal and started to practice, practice, practice, and I was getting better at all aspects of the game.”

One day Fish got a call from the Team USA Fastpitch Softball Team for the Maccabiah Games, which are basically the Jewish Olympics. He played for Team USA in the 2005 Maccabiah Games and it was the first time Fish had been back on the field since college.

“That led to me playing a full season of professional fastpitch softball in 2006, which I didn’t even know was a thing,” Fish said, laughing. “The level of play was super, super high I mean the guys were so good.”

In 2007, Fish played third base for the Tel Aviv Lightning in the only year of the Israel Baseball League, which was the first ever professional baseball league in the Middle East. He hit .347 and won a gold glove but unfortunately the league folded, and Fish had to take his talents to Germany to play in the Bundesliga.

“I lived in a mental hospital there across from the field because that was the housing they gave me,” Fish said. “I don’t think it was because of my mental state but I’ve never been able to quite figure it out.”

Fish went on to play in the Maccabiah Games again in 2009 and coached team Israel in the 2011 European Baseball Championship. In 2012 he was selected to be the bullpen catcher on Israel’s first ever World Baseball Classic team.

As much as Fish likes to joke about being an emergency backup on the team, it was an enormous step for him. He was on a big-league caliber roster coached by Brad Ausmus, who has since managed the Detroit Tigers and the Los Angeles Angels. Bench coach Gabe Kapler went on to manage the Philadelphia Phillies and is currently at the helm of the San Francisco Giants. The team’s center fielder Sam Fuld is now the general manager of the Phillies. After the WBC, Fish moved to Israel to become the country’s National Director of Baseball, working to grow the game there for three years. He was a coach on Israel’s miraculous 2017 WBC team that came in ranked 41st in the world and promptly defeated 3rd ranked South Korea, 4th ranked Chinese Taipei, and the 9th ranked Netherlands squad. It was the first team in WBC history to go undefeated in the first round after getting into the tournament through a qualifying round. They went on to defeat 5th ranked Cuba before falling in a rematch with the Netherlands and then top ranked Japan to take 5th place overall, which in itself was a success beyond imagination for team Israel. Fish then spent the next two summer coaching in Cape Cod he would work alongside Gillum. In 2019 Fish was hired by the Los Angeles Dodgers as a minor league coach and was going to coach for LA again in 2020 until the season was cancelled.

“2020 was the first year I can remember that I wasn’t playing or coaching baseball,” Fish said. “I’m really excited to get into this learning process of getting to know the team, the city of Savannah, the people, the ballpark, and then getting out there and doing our thing of performing and entertaining and giving people the best Bananas experience.”

“He’s gonna fit right in,” Gillum said. “I’ve been trying to get him as an assistant on the team for three years. He just fits everything we do from the creative crazy ideas mindset to the competitive development baseball side of things, he checks both boxes.”

The Premier Team is the future of the Savannah Bananas. This is the team that will be playing specialty games before and after the CPL season in Savannah and on the road. The excitement in Jesse Cole’s voice when talking about getting Fish to lead the new squad was palpable.

“This was the number one guy we wanted to coach this team,” Jesse said. “For the Bananas Premier Team and Banana Ball we cannot have a traditionalist because what we’re trying to do is completely nontraditional. We’re breaking the rules and the mold of baseball even more so than we have the last five years. We needed a coach that will embody that and be all in on us doing even more of that. Nate is clearly our man.”

Jesse and Nate both admit they have a lot of work and jamming time they need to put in before Fish slaps on the Bananas uniform for the St. Patrick’s Day game on March 13th. All Jesse can guarantee for now is more Bananas madness than ever before.

“Just wait and see,” Jesse said, “I have no idea what Nate is going to bring to the show, but everyone should expect the unexpected!”

Fish is open to almost anything, but he said his general coaching style won’t have to be shifted for the Bananas.

“I’m trying to bring energy and experience,” Fish said. “I share a lot of information and share a lot of energy with my players, beyond that I certainly have some ideas that I wanna try with this team.”

Gillum can’t wait to see what happens with his good friend leading the Premier Team, and he only has one request from the Bananas.

“He’s one of the funniest humans I’ve ever been around,” Gillum said. “His wardrobe outfit choices are some of the most outrageous I’ve ever seen, specifically he wears a lot of hats with no bills on them. The Bananas have to get him a hat with no bill for these games.”

Throughout a life almost completely devoted to baseball, Fish has branched off into the worlds of writing and art as well. He has published features in Heeb Magazine and Leveled Magazine. In 2016, he created the Brick of Gold Publishing Company and published his first book, Israelis Drive Anything. It is made up of photos he took on his iPhone of Israelis driving, well for lack of a better word, anything. He has also released two collections of poetry, 98.6 Poems, and Poems for my Wife: Love Poems for Non-Romantics. Most recently his publishing company has released three books filled with writing and art from inside California State Prisons.

“The creative projects have always been growing and growing side by side with my life in baseball,” Fish said. “I’ve just always had a very strong instinct to write especially. The visual art came later but the ability to say what I want, say what I think, to express myself, and to do it in writing was always unavoidable. Even when I was playing college baseball I was a very bad student but I was still writing all the time.”

When it comes to his art, Fish had a solo exhibition in 2011 called Jellybeans at Gallery Bar in Lower Manhattan and another in 2013 called Natureficial at the Red Door Gallery Chelsea. Right now, he has an exhibition called Post Primitive at the Urban Cowboy Lodge in Big Indian, New York.

“In my creative work I’m very, very outspoken and bold, but in person I’m much more reasonable and laidback you know. I’m not running around screaming anything crazy even though it may seem that way if you read one of my books,” Fish said, chuckling.

The whole package of what Nate brings to Savannah is why Gillum has wanted him here for years and why Jesse is so excited to have him now.

“Nate’s an extremely interesting guy, it just takes a quick look at his Wikipedia to see that,” Jesse said. “He’s the perfect man to coach our Premier Team because he’s bringing knowledge from such a diverse background of experiences in and out of baseball and he’s got the mindset of being ready to try anything.”

“This is a guy who’s coached around the world and seen different kinds of baseball and those experiences will pay huge dividends for coaching with the Bananas,” Gillum said. “He’s gonna fit in so well because throughout his life he’s shown that if something is normal, he’s probably gonna do the exact opposite.”

After managing the Bananas this spring, Fish will be the third base coach for team Israel in the Tokyo Olympics this July.