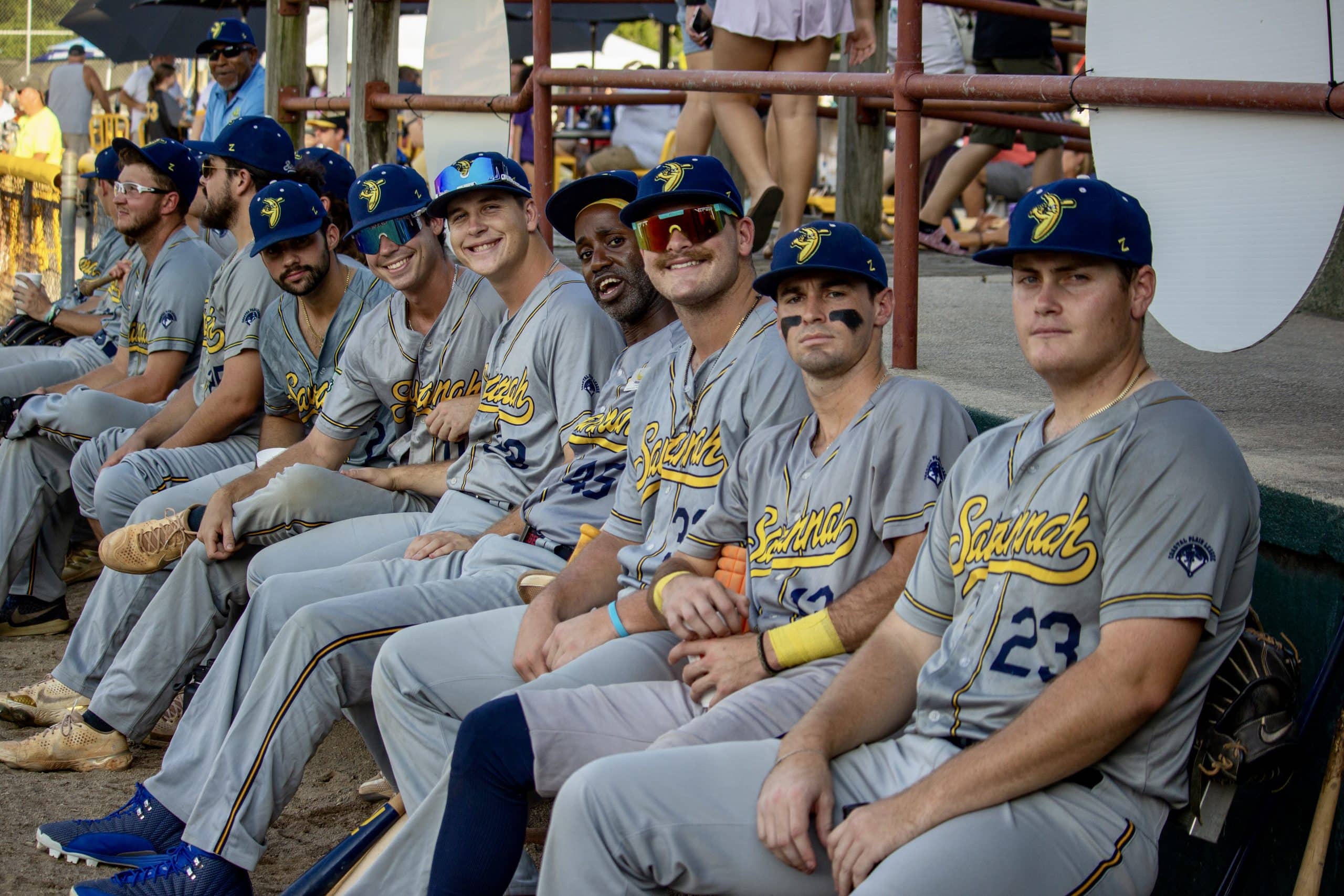 The Bananas blitzed the Tobs in an 8-3 victory to take game one of the CPL Championship in Wilson, North Carolina. The Nanners now have two chances at home to secure their second straight Pettit Cup as game 2 and game 3 if it’s necessary will both be in Savannah.

With one out in the top of the first, Armando, “If I Saw as Many Fastballs This Year as I Did Tonight I Would be Hitting Way Better”, Becerra, worked a walk, got to second on a balk, and stole third but Wilson’s starter Alex, Brewed Chard, Bouchard, would strand Mando there. 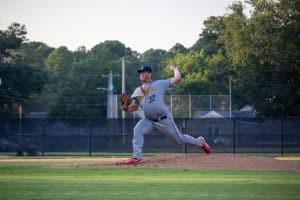 The Bananas went with Gavin, Sources Say: Definitely Not the Smallest Man to Pitch in the 85-Year History of This Ballpark, Oswald, on the bump and he used a couple grounders and a flyout to retire the Tobs in order in the bottom half. 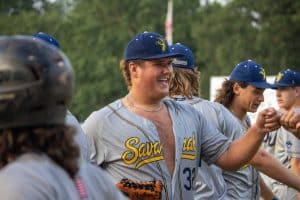 Ty, Let’s Ride, Jackson, took a leadoff walk in the top of the second and Indiana, Man That Wall Feels Close… But Not Quite Close Enough, Stanley, demolished the first pitch he saw of the night off the top of the left field wall for a double, pushing Ty to third. 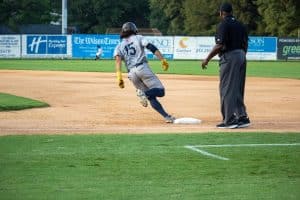 With one down, Taylor, Give Me, Justus, or Give Me Death, lined a single up the middle to score Jackson and Stanley putting the Nanners ahead 2-0. The Tobs were ready to rock and roll in the bottom of the second, with Jacob, McDouble, McCaskey, bouncing the first pitch off the inning off the right-centerfield wall. Scott, It’s a Barrel in the Book, Mackiewicz, flared a single to center on the next offering, scoring McCaskey to cut the Bananas lead in half. Matt, Baby, Schark, stroked a single through the left side and then Harrison, Stromboli, Cannoli, Stoli, Rolie Polie Olie, Pontoli, dropped down a sac bunt to move Mackiewicz and Schark over. Jake, So We Meet Again (Jake Played 2nd Base for the HiToms Last Year who the Bananas Beat to Reach the 2021 CPL Championship), Lysaght, hit a loopy liner to center that Mando made an excellent diving catch on for the second out of the inning as Mackiewicz scored from the third. After an infield single from Blake, BA-LAHCK-AY, Evans, the Bananas went to the pen to bring in Zach, Is That Rollie Fingers?, Smith, who got a popup to second to strand runners on the corners.

In the top of the third the Bananas got a leadoff single from Becerra and then a walk from David, Is it a Field? Is it a Plain? No, it’s a…, Meadows, but couldn’t push anything across. Smith worked around a one-out single in the bottom half to throw a scoreless frame.

With one down in the fourth, Taylor took a free pass and then with two away Brody, Comme Ci, Come Set, Wortham, got plunked. Armando lifted a fly ball deep to left that Trey, Gotta Turn That, Paige, couldn’t find in the lights so it one-hopped the left field wall for a 2-run double to put the Nanners back in front 4-2. Schark led the bottom half off with a soft single to left for a base knock and with two outs Evans looped a ball to center for a single as well. Then Efry, Congratulations Gillum, You Played Yourself, Cervantes, bounced a single up the middle and off the glove of a diving DR to make it a 4-3 game. Tyler, Man I Wish I Didn’t Coach Efry so Well for Two Years at South Mountain, Gillum, came out to bring in his four-year man Ryan, Here for a Good Time AND a Long Time, Kennedy, who got a bouncer to short for a fielder’s choice to strand a pair and keep the one-run lead intact.

In the top of the fifth the fellas loaded the bases off Bouchard with one away and the Tobs made their first pitching change of the game to bring in the southpaw Tanner, Quarter Daughter, Halverson, who got a grounder to short from Dylan, My Game Gets Way Better After This, Kurahashi-Choy Foo, for a 6-4-3 double play to escape the jam. Kennedy gave up a leadoff single in the bottom half but got help from KFC who made an incredible play as he turned a hot-shot to third into a fielder’s choice and then Ryan notched two K’s to strand a man on first.

Justus worked an 11-pitch leadoff walk in the top of the sixth off the third pitcher of the night for the Tobs, Joey, Bag a’ Donuts, Mazzetti. Taylor would get to third with two down but he was stranded there. In the bottom half, Ryan gave up a one-out single to Lysaght and then picked Jake off to help himself face the minimum in the frame.

With two outs in the top of the seventh Ty flared a single to center, stole second on the next pitch, and then scored on an Indy Stanley laser beam double down the third base line giving the Bananas their third two-run lead of the night, 5-3. 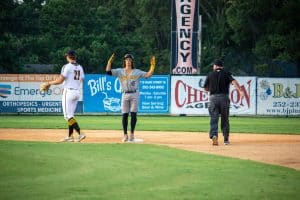 Jestin, The Ejecto-Hat was Back in Midseason Form, Jones, came in for the top of the order in the bottom of the seventh and picked up a pair of strikeouts and a fly to center for a 1-2-3 inning.

The fellas went down in order in the top of the eighth and Jestin got a pop up and two more K’s in the bottom half to make it six straight retired to start his night.

Looking for some insurance in the top of the ninth, Doc worked a walk and stole second. Bryson, Back in My Prime This Would be Over the Scoreboard, Bloomer, smoked a liner to left so hard that the supremely fast DR couldn’t even score from second. With one away, Indy notched his fourth hit of the night, lining a single to center that scored Meadows making it 6-3 and sending The Boomer over to third. Choy Foo put a perfect bunt down the first base line to score Bloomer and move Stanley to second. Indiana swiped third and then scored on a passed ball to make it 8-3. In the bottom of the ninth Jones notched a strikeout, a fly to center, and then another K to secure the 8-3 victory in game one.

There were plenty of heroes for the Bananas in the series opening win on the road.

The offense was led by:

Justus: 1-2 with the big two-run single to start the scoring. He picked up three walks and a run scored afterwards.

Mando: 2-4 with the two-run double to retake the lead for good, a walk and a stolen base.

Ty: 1-3 with a pair of walks, a run scored, a steal, and more energy shown from one person than Fleming Stadium has seen in its 85-year history.

The pitching was led by:

Ryan Kennedy who went 2.1 scoreless frames allowing 2 hits and striking out a pair.

Jestin Jones who tossed 3 perfect innings while striking out 6.

The Bananas now have two shots to win their second straight CPL Championship at home in Historic Grayson Stadium. We’ll be live with the pregame show Friday night at 6:30pm eastern and first pitch at 7:00 on Bananas Insiders!

Big thanks to Adam, I Completely Forgot About Blake McGehee, Moreau, as well as Josh, I Can’t Believe Jestin and Juicebox Were Clinging to the Back of the Whiteboard, and Drew, Kenan Irvin if He was Awesome at Pitching, Shaver. 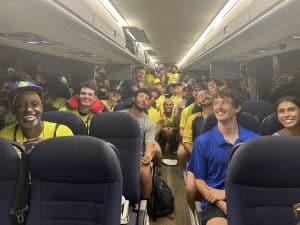