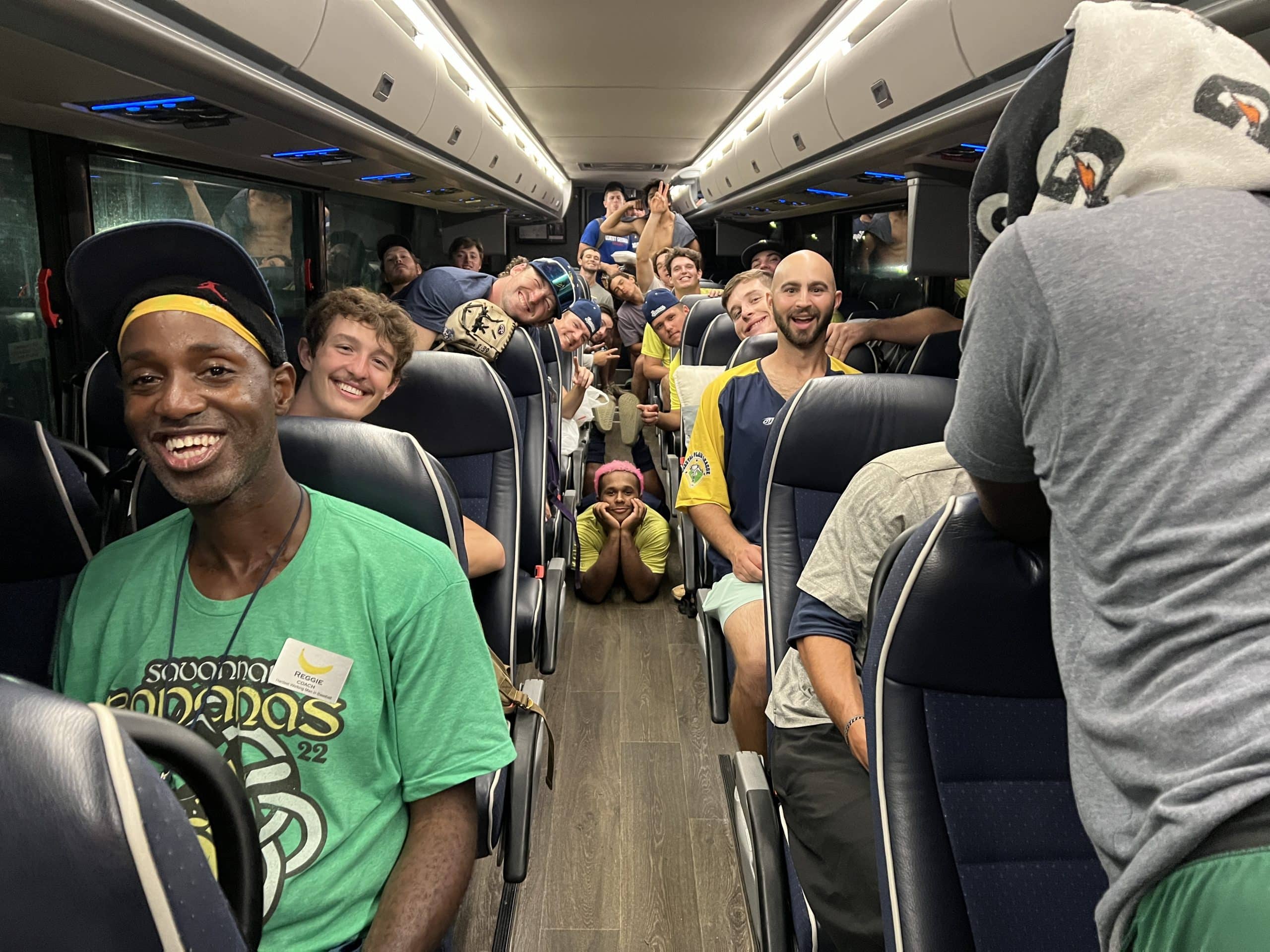 The Bananas went to pound town on the Bacon in a dominant 12-0 win in a game shortened to seven innings because of the run rule.

The onslaught began with one out in the top of the first inning as Armando, I’m Coming Out so You Better Get This Party Started, Becerra, worked a 10-pitch walk off of Hunter, The Hunted, Varnadoe. Bryce, The Luther Williams Wonder Boy, Madron, worked a full-count walk as well and then Ty, I Have an On-Again, Off-Again Relationship With My Batting Gloves, Jackson, got hit by a slider. With the bases juiced, David, I’m Coming for You Carlos (*Check the Stats*), Meadows, got nailed in the back by a fastball to force in Indy and give the guys a 1-0 lead. Dylan, That’ll Do Donkey, That’ll Do, Kurahashi-Choy Foo, tapped a slow roller to short that was thrown away by Jake, Rookie Mistake, Larson, to push in two runs and make it 3-0. Brody, That Was Easy, Wortham, took a 5-pitch walk and then with two outs Jack, I’m Fouling Balls Off on Purpose, Renwick, worked the second 10-pitch walk of the inning. Ball four was a wild pitch down and away and with the fellas off on the pitch Dylan was able to score from second after D.R. scored from third to make it 5-0. All in all, ten guys came to the plate in the first inning and the Bananas scored five runs without getting a hit. The boys worked four walks off of Varnadoe who had only walked four guys in 20.1 innings on the summer. In the bottom half, Drew, Ster the Rooster, Shaver, worked around a swinging bunt single and a hit batter by picking up a pair of K’s and a pop up to keep Macon off the board.

Silver retired the Nanners in order in the top of the third and Shaver returned the favor.

With one away in the fourth, Jack turned on an inside fastball and smoked a home run to left for the team’s first hit of the night and Renwick’s first long ball of the summer. In the bottom half, Drew once again set the Bacon down 1-2-3 to make it eight straight retired to end his night.

Two outs into the top of the fifth Doc lined a single to left and KFC hit a frozen rope to center to make it first and third. Silver tried to pick off Choy Foo and Meadows immediately broke for home, swiping the bag without a throw for his eighteenth steal of the summer in as many tries, (in his 15th game no less). With a 7-0 lead now, Tyler, Daddy Ball, Gillum brought in, Zach, The Boys are Trynna Hit Some BP!, Smith, set down the Macon hitters in order in the bottom half to make it eleven straight retired.

With one down in the top of the sixth, Indiana, Thanks for Not Mentioning I Made Two Outs in the First Inning, Stanley, got hit by a heater. He stole second with the help of first base coach Bryson, And You Thought Making BP Groups Was Impressive, Bloomer. Mando stroked a single back up the middle to bring in Stanley making it 8-0. Then Bryce absolutely demolished a ball 102 mile-per-hour and 402 feet out to right field for his second ding dong of the summer, (both have come in Macon). In the bottom half of the sixth Smith worked around an error by getting a grounder and two K’s to keep the game ten-zip Savannah.

The Bacon brought in their right fielder Kyle, There Goes My Two Way Dreams, Bork, who got a flyout but then gave up a booming triple to Jack. Indy tapped a soft grounder to the left side for an RBI infield single and then after a single from Mando, Bryce bounced a ball to second scoring Stanley to make it 12-0. Zach went back out for the seventh and gave up a bloop single but used a strikeout, flyout and groundout to shut things down.

It was a bizarre but incredibly satisfying game for the Nanners. Scoring five runs in the first without a hit was banana pants bonkers, as the first hit of the night wouldn’t come until the Renwick homer in the fourth inning. The pitching was superb as per usual, with Shaver and Smith combining to allow just two soft hits while striking out nine for the team’s league-leading fourth shutout of the summer. Great night to be Corey, PEE-CAN, Pye.

We’ve got a makeup game to take care of tomorrow night, as the Flamingos are coming down from Florence for their final matchup of the summer with the boys. The pregame show will kickoff at 6:30pm eastern, first pitch will be at 7:00, and as always you can catch all the action on Bananas Insiders!

Shoutout Adam, The Prophecy Was Nearly Complete, Moreau and Josh, You Can Find Me at Juicebox’s, Talevski, for help with this evening’s nicknames!