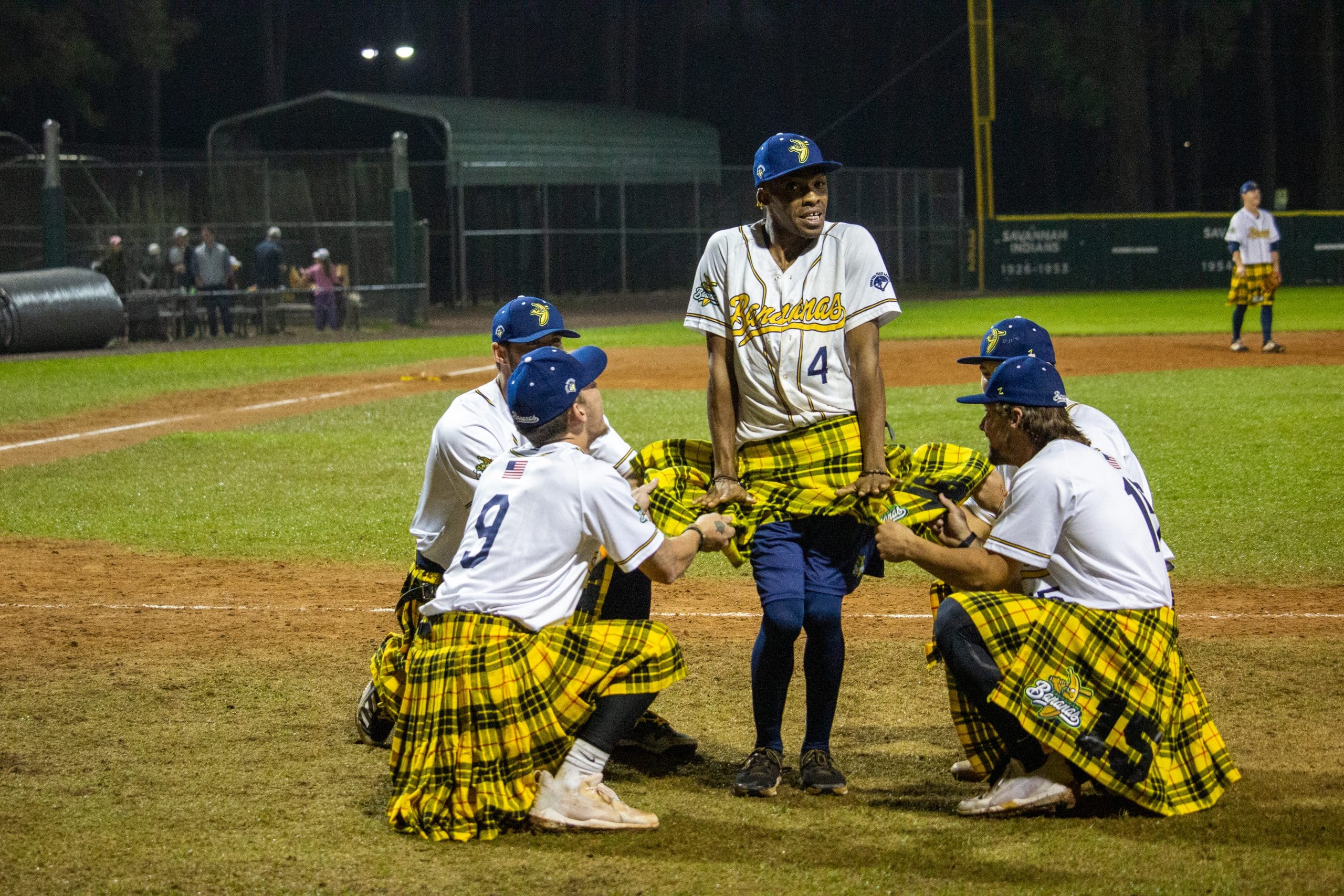 We’re back baby. That’s right. The 2022 Banana Ball World Tour officially kicked off tonight right here at Grayson Stadium in front of a sold-out crowd. And what better way to get things going than in those luscious yellow kilts.

It’s Saint Patrick’s Day in Savannah (in six days) – why not celebrate now?

Let’s cover a few bases (pun intended) before we head into the game recap.

First Base: It’s the Banana Ball World Tour. That means we’re playing Banana Ball (can we get a heck yeah?!). We’ll throw a reminder of the rules here: https://thesavannahbananas.com/bananaball/

Second Base: It’s the Bananas vs. the Party Animals. Now, some of the guys who were Bananas players last year have in fact switched sides. We won’t hold it against them. We get it – people change. You can peek at the rosters here: https://thesavannahbananas.com/premierteam/

Third Base: Honestly, we don’t have a third base note. It just felt weird to stop at second base. Can we get three over-the-head claps for a triple? (#iykyk)

Now, there’s only one way to get things started and that of course is by lifting a Banana Baby, having a home run hitter, the Banana Nanas dancing, and doing a kick line to the legendary ACDC song “Thunderstruck” immediately after the National Anthem. Somebody call the Rockettes, the Bananas and Party Animals are coming for their jobs.

A lot goes on during these games, so we’ll try to keep it short and sweet. Nobody wants to read a novel this late. Let the game begin!

Inning One: It’s only fitting that the dynamic duo of Bananaland, Bill LeRoy and Kyle Luigs, were in the one and two spot on the field this evening. It was a bit of a tough start for four-year Banana, Kyle. A single and a walk (turned sprint because it’s Banana Ball) lands two Party Animals on the bags. Then Garett Delano (former Banana turned rival) absolutely clobbers a 3-0 pitch for a 3-run homerun. We’re probably not supposed to say this, but it was kind of beautiful.

It’s probably important to note that Party Animals Head Coach, Adam Virant, was holding a puppy named Frank in his arms while coaching third. Three flyouts to Michael Deeb in left field end the top half.

The Bananas turn to bat. Bill LeRoy becomes the first Bananas baserunner with a walk turned sprint. While Bill does end up scoring, the Bananas can’t come up with the extra runs to win the inning and the Party Animals take a 1-0 lead.

Inning Two: Not a ton happened in the top of the second on the offense side of things for the Party Animals. After three outs were secured by the Nanner defense, we hopped straight into the crowd singing some classics.

To start the bottom of the second the Bananas coaches took their respective spots. Eric Byrnes heads to third base coaching box. Maceo dances his way to the first base coaching box. And Michael “Bobby Barrells” Kowalski decides to chalk his own box right behind second becoming what we assume to be the world’s very first Second Base Coach?

Michael Deeb kicks off the inning with a walk turned sprint turned double. He makes it to third on a ground ball from Danny Oberst. Ryan Cox comes up to the plate and rips a single to right field to score Deeb. Bananas walk it off and win the inning. The only correct thing to do in that moment was have the entire team line up on the first base line and pull their kilts up for the crowd. Saucy.

Inning Three: Inning number three was scoreless for both sides. But one very VERY important thing to note was Kyle Luigs setting the new record for fastest inning pitched in Banana Ball. In a mere two minutes and fifteen seconds, the Nanner defense shut it down with two fly outs and a strike out.

Inning Four: Luigs was not playing games this inning either. A quick strike out followed by a celebration where Kyle pretended to fish Bill was appropriate. Luigs racks up another strike out and then an infield fly. Three up, three down.

Cue everyone in the stadium doing the dance to Hey Baby. What a treat.

Sean “The Exterminator” Fluke takes over the bump for the Party Animals. Two quick ground outs come into play. Michael Deeb comes up to the plate and hits a pop fly to shallow left field. The Bermuda Triangle of Party Animals can’t snag it. But Breland Almadova (the left fielder) did twerk after he missed the ball. We respect it. Dan Oberst comes up to bat and hits a shot to left center to walk the inning off.

Bananas win the inning and are up 2-1.

Bananas can’t make any moves in the batter’s box and the Party Animals take inning number five. We have a tie ball game, folks.

Inning Six: This inning was pretty crazy, but honestly both teams scored a run each, so it’s a draw.

Kyle Luigs was coaching first base in a construction helmet. It’s casual.

At this point, the game was closing in on the two-hour time limit.

Inning Seven: Neither team can bring a runner across the plate. The two-hour time limit rings meaning the game is officially over. Now, it was a 2-2 ball game which leads us into the Tiebreaker Showdown.

Matt Malatesta takes the bump, FlashThaKid takes the field, and Bill LeRoy gets behind the dish. Tanner Thomas steps into the box.

Now the Party Animals had to shutdown the Bananas to get another crack at the bat.

They went to Justin DeGrandis on the mound with Jacob Teston in the field and Brady West in the gear. Byrnes sent Reece Hampton up to the dish.

The Party Animals immediately ripped their shirts off. Respect. Ball. Ball. Foul ball. Ball. Ball. He heads to second. Jake Skole comes up to the plate. JAKE SKOLE WITH A SHOT TO RIGHT FIELD TO SCORE HAMPTON!!

Well folks, that’s all we’ve got for our magical Opening Night in Bananaland. Thanks for being a part of it. We’ll be back in Grayson Stadium tomorrow night for Game Two of the Banana Ball World Tour.