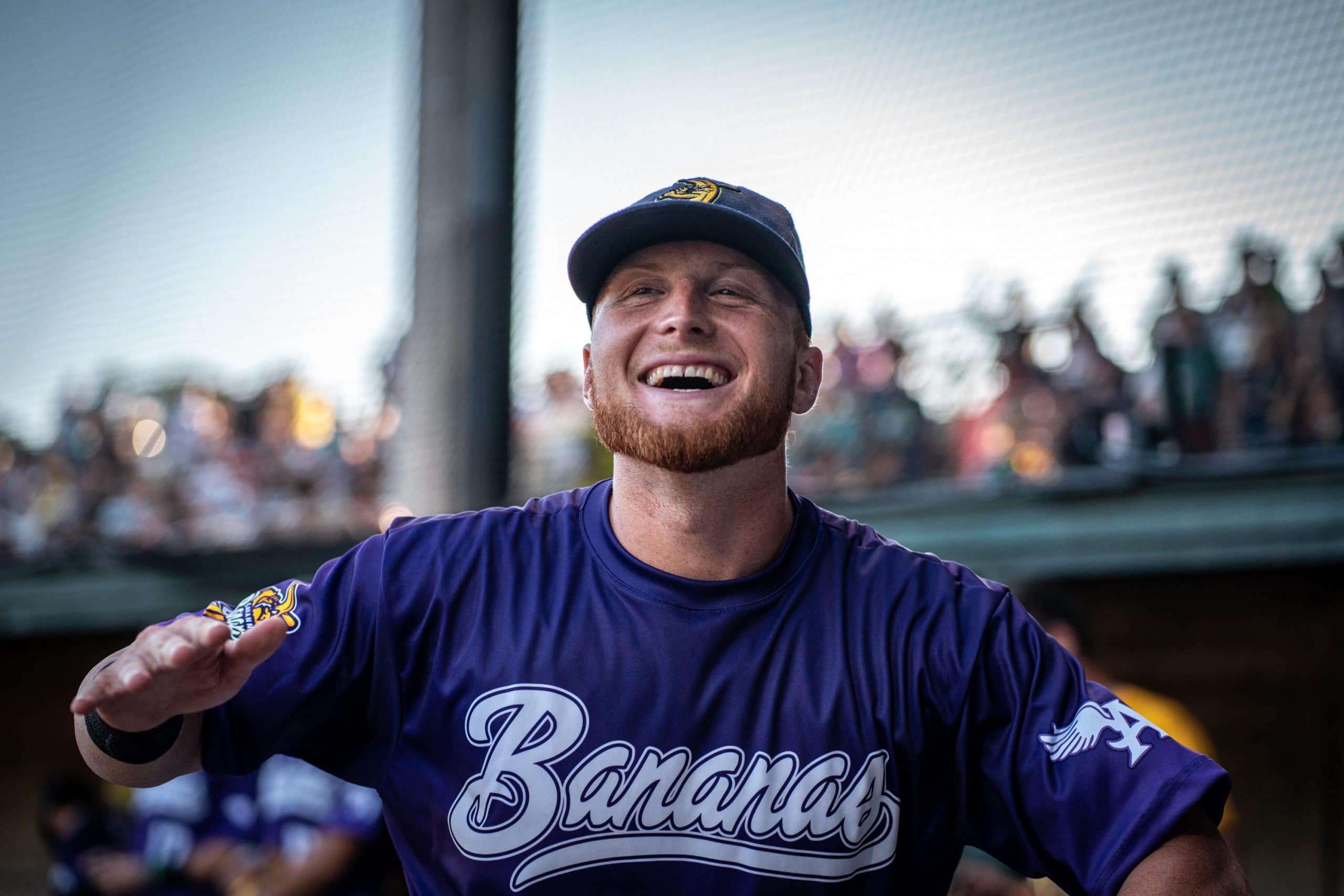 Rocking special purple uniforms on for “Strike Out Cancer” night  at Grayson Stadium, the Savannah Bananas defeated the Macon Bacon, 1-0, on Friday.

With the win, the Bananas moved up a full game over the Lexington County Blowfish in the second-half standings. Here’s how it went down on Friday night.

Special Unis for a Special Night

As a part of the “Strike Out Cancer” game against the Bacon, the Nanners wore special jerseys at Grayson Stadium. Though the color purple isn’t typically associated with the Bananas, they did so in order to represent all forms of cancer. What was fun about these unis is that there was an auction on every player’s game-worn jersey. All of the proceeds went to the American Cancer Society.

All proceeds will be donated to the American Cancer Society. Auction ends at 9pm. pic.twitter.com/AqSGYiZXOU

Starting pitcher Kyle Luigs (more on his night in a bit) told me after the game that nights like this really put things into perspective.

“It’s really cool anytime we get to do something like that for the community. [Coach Tyler] Gillum really said it best. He really set the tone in the locker room before the game, kind of talking about getting halfway through the summer and taking games for granted. He kind of slowed us down and talked about how this game meant more,” Luigs said. “A lot of the cancer patients were able to be here. That set the tone for the night and showed us that this game is a lot more than just a game on July 18.”

There was a special moment in the middle of the fifth inning when all present cancer survivors in the stadium lined up behind the pitcher’s mound for a honorary moment. The stadium lit up with flashlights as the sold-out crowd showed their support for the cancer survivors.

A special moment to honor those who have or still are battling cancer 💜 pic.twitter.com/PtoWOLGuH6

“That was a cool moment. I feel like the ‘Salute the Troops’ is a cool promotion that we do during the game,” said Luigs. “Anytime we can take a couple minutes out of the game, really grab everybody’s attention and put awareness on what those people are going through every single day is something really special.”

The Bananas raised $2,784 in total for the aucitoned jerseys with all of the proceeds going to the American Cancer Society. The Heart of BananaLand, Bill Leroy, had the highest jersey sold at $395.

Tonight’s First Banana featured a special guest joining the team Friday night. In May of 2017, Greg Black was diagnosed with a very rare form of Blood Cancer. It’s so rare, in fact, that only three out of every one million people have ever had it. When Greg was diagnosed in 2017, he was only given six months to live. As if written in a Hollywood studio, Greg’s cancer is in remission as of yesterday (Thursday).

Tonight we got to celebrate Greg Black striking out cancer with a special jersey and a first pitch! pic.twitter.com/f1otdc2VTl

What’s interesting about this whole situation is that this has been in the works for a while. Exactly how long I’m not sure. But all along while planning to throw the First Banana, Greg had been undergoing chemotherapy treatment. And as if willed by fate, Greg was in remission when he took the mound in front of a sold-out crowd in BananaLand.

How can you not be romantic about baseball?

Nanners of the Game

It was a nice bounce-back night for Kyle Luigs, who went on to toss 6.0 scoreless innings, one hit, seven strikeouts and two walks. Luigs now has at least seven strikeouts in four of his six starts this summer. The seven-footer in Jared Beck was feeling himself tonight as well. He finished the game with 3.0 scoreless innings, five strikeouts, no hits and no walks. His stuff was so good tonight that he was laughing in between striking out Bacon hitters because he simply knew he was built different.

Shortstop Jesse Sherrill was 2-for-2 with a hit-by-pitch. Sherrill was all over the place defensively, making spectacular plays seemingly every inning. Dan Oberst got the Nanners the only run they needed with a sac fly that scored Carsen Falsken in the bottom of the fifth inning.

The Bananas are on the road Saturday night to visit the Spartanburgers with first pitch set for 7:00 p.m. ET.