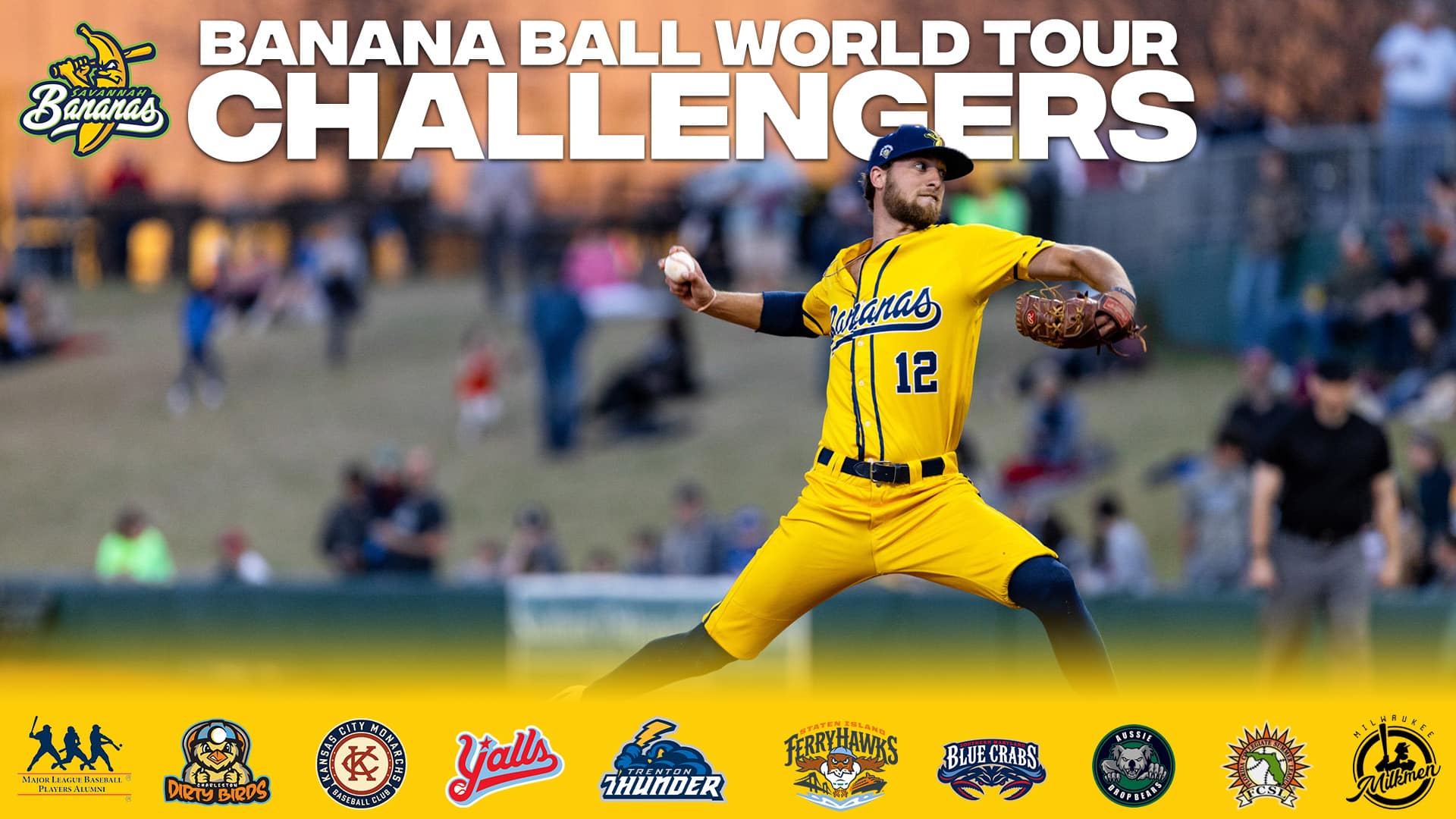 The Savannah Bananas are thrilled to announce that eleven challenger games are being added to the 2023 Banana Ball World Tour, three of which will be against the Major League Baseball Players Alumni Association.

The three-game series will kick off March 11th in Savannah. Round two will be April 29th at George M. Steinbrenner Field in Tampa Bay. The finale will be September 2nd back in Savannah. The Major League Baseball Players Alumni Association’s roster will be filled with former MLB players including All-Stars and World Series champions. The second and third game of the series will be coached by Clint Hurdle and Curtis Granderson. The coaches for game one are still being determined.

The Bananas will welcome the Florence Y’alls of the Frontier League into Savannah on May 15th. The Southern Maryland Blue Crabs who play in the Atlantic League will storm Historic Grayson Stadium on June 19th. The Florida League All-Stars will journey north to take on the Bananas on July 7th and 8th. The Charleston Dirty Birds from the Atlantic League will be in Savannah on July 17th, making it a three game series including the two games already announced in Charleston on April 21st and 22nd.

The 2023 Banana Ball World Tour will truly get international when the Aussie Drop Bears make the journey from Australia to take on the Bananas June 8th, 9th, and 10th and then battle the Party Animals June 12th, all in Savannah. The Drop Bears roster will be filled with top notch collegiate and professional players from the Land Down Under.

The trip up to New York City has become hostile, as the Bananas will now be playing the Staten Island FerryHawks on August 11th and 12th who, like the Blue Crabs and FerryHawks, call the Atlantic League home.

“As we continue to grow the game of Banana Ball, competing against a variety of worthy opponents is key,” Bananas owner Jesse Cole said. “It’s hard to contain my excitement when I look at the schedule and see a team full of former MLB stars, some of the best independent professional baseball teams in the country, a strong pro team from Australia, and a team full of the best players the Florida League has to offer.”

Here are all of the Challenger games on the 2023 Banana Ball World Tour:

May 15th vs Florence Y’alls

As it stands right now, there will be 22 challenger games on the 2023 Banana Ball World Tour.  The Presale Alerts List is now closed and there are no more opportunities to purchase tickets. To join the ticket waiting list you can head to https://thesavannahbananas.com/ontheroad/. Please know this does not guarantee the ability to purchase tickets.