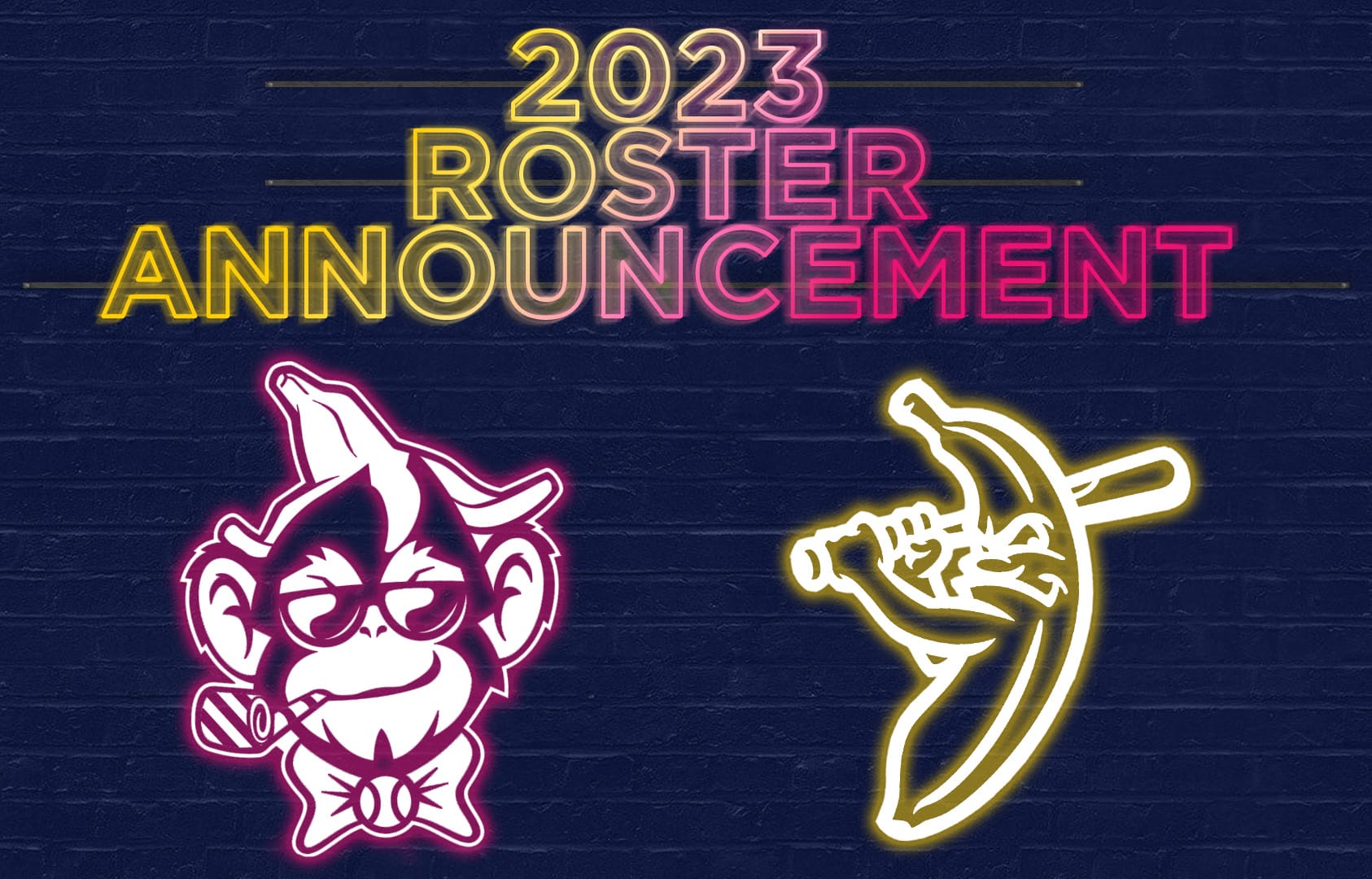 40 Players Make up the Most Fun Teams in Sports

The Savannah Bananas have announced their roster for the 2023 Banana Ball World Tour. The Bananas and Party Animals have a combined 53 years of independent professional baseball experience and 23 years in Minor League Baseball. And that doesn’t include Red Sox Hall of Famer Bill Lee’s 14 years of time spent in Major League Baseball and subsequent 40 years playing independent pro ball.

Former first round draft pick Jake Skole headlines the group of players who were selected by MLB teams. Bret Helton, Reece Hampton, Bill Lee, Carson Goldsmith, Breland Almadova, and DJ “The Invader”  also had their names called on draft day, while Michael Deeb and Eric Jones Jr. were both signed by MLB teams as free agents.

Many of the players have created large social media followings, none greater than Jackson Olson who has over one million followers between just Tik Tok and Instagram combined. The bat trick master, as seen on ‘You Bet Your Life with Jay Leno,’ Alex Ziegler boasts over 650,000 followers across Tik Tok and Instagram and the songbird of our generation Dalton Mauldin has over 400,000 followers when you throw Twitter into the mix.

All the stars of the five-part ESPN+ documentary Bananaland have returned as well, highlighted by the trick pitching extraordinaire Mat Wolf, the tallest man in sports Dakota “Stilts” Albritton, and the Dancing Home Plate Umpire Vincent Chapman.

The best of the best on the field from the 2022 Banana Ball World Tour are returning as well. Dan Oberst, who led the tour with his .440 AVG, Bill LeRoy and his top notch .588 OBP, Malachi Mitchell who paced the tour with his 15 runs scored and 11 stolen bases, and Michael Deeb with his tour-high 5 walk-offs. On the pitching side of things Kyle Luigs and his tour leading 22 strikeouts and Christian Dearman with his lowest on the tour 3.52 ERA are both back as well.

Here are the full rosters for both teams:

The Party Animals are headlined by returning stars from the 2022 tour, Tanner Thomas, Breland Almadova, Garett Delano, and Dalton Cornett. After playing for the Bananas this past spring, Jake Skole, Reece Hampton, and Collin Ledbetter are going to the dark side. Bryson Bloomer, a 2021 and 2022 CPL Champion Banana is also switching sides. Party Animals for the first time in the Summer Series, Dustin Baber, Chase Achuff, Jason Swan, Brandon Sherman, and Bret Helton are back for the 2023 tour. Dylan Porter, a Banana in the Summer Series, has become a Party Animal. Joe Lytle, Jake Lialios, and Carson Goldsmith will be making their Party Animals debuts on the tour.

The One-Working Eyed Wonder, Vincent DeRubeis, has been signed with his team to be named later.

The Bananas will be coached by Tyler Gillum and Adam Virant while 2022 Banana Ball Head Coach Eric Byrnes is returning in 2023 as the Director of Chaos. The Party Animals will be led by player/coaches Mike Vavasis and Sam Claycamp.

“These two historic rosters have crazy talented and entertaining players on both sides,” Gillum said. “The tryout went better than we could’ve possibly expected. We felt like at the end of the day we could’ve easily put together three Banana Ball teams. Fans will love the new additions to these rosters and we’ll have some surprises for everyone on the tour. These two rosters will most definitely put on the best show in sports in 2023. I can’t wait to travel the country with these two teams to create never forget moments for fans.”

This rounds out the regulars for both teams, but there will be plenty of guest players that will be surprises throughout the 2023 Banana Ball World Tour. The Presale Alerts List is now closed and there are no more opportunities to purchase tickets. To join the ticket waiting list you can head to https://thesavannahbananas.com/ontheroad/. Please know this does not guarantee the ability to purchase tickets.