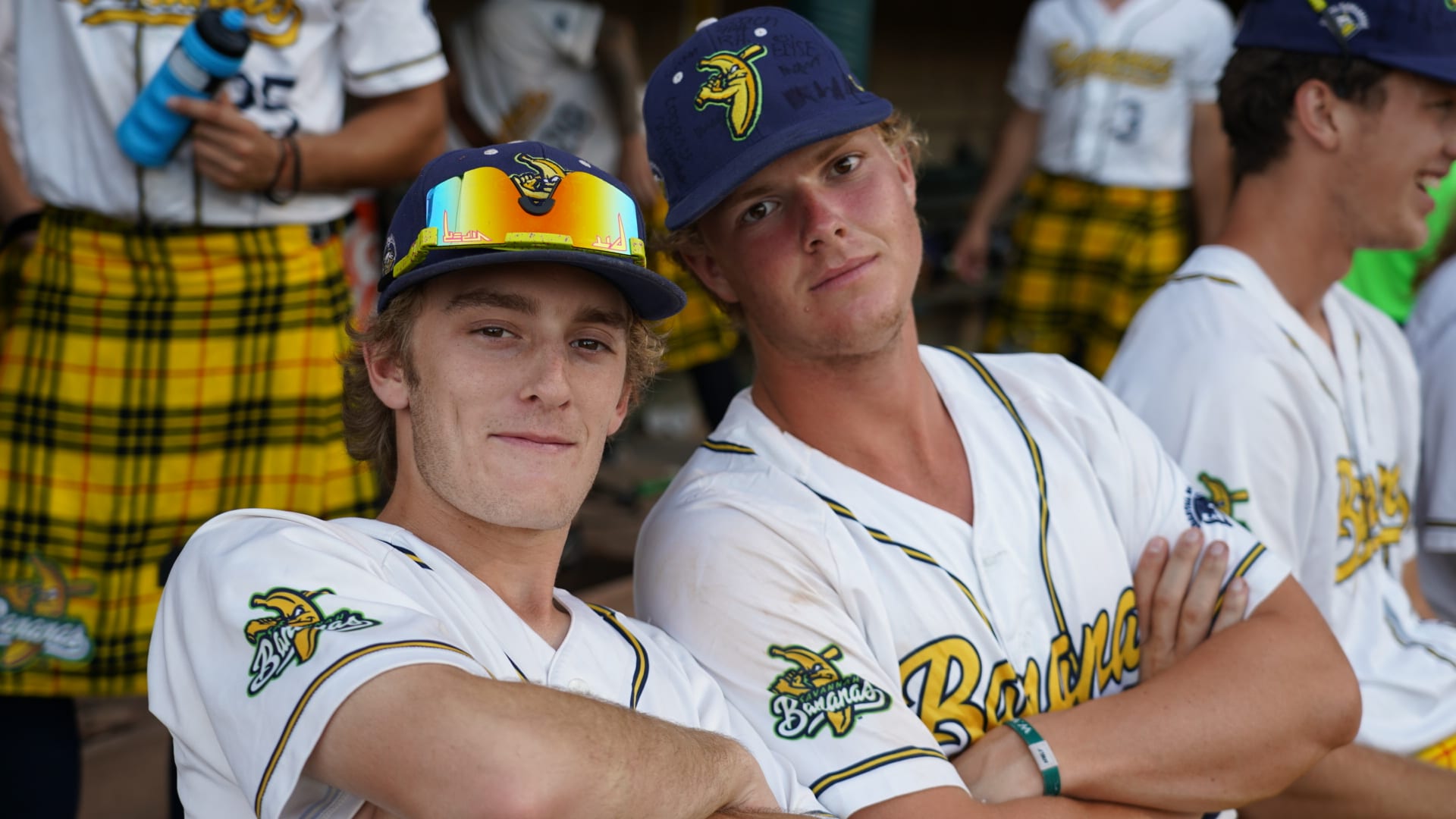 Though your calender may say July, the boys at Grayson Stadium slipped on the kilts Wednesday night as if it were March 17th in front of a sold-out crowd, holding their steady first-place lead in the CPL.

On Wednesday night, it wasn’t the middle of July. The Nanners turned the clocks back a few months to St. Patrick’s Day by slipping on the kilts. Just like it’s always five o’clock somewhere, it was March 17th at Grayson Stadium on Wendesday night as the Bananas ditched the typical baseball unis in favor of the free-flowing kilts for the first time this season.

If it were up to Bill, the heart of BananaLand, Leroy, these would be the home uniforms for every game at Grayson Stadium.

“It felt so good. It feels so free. Honestly, I wish we could play every game in these,” said Leroy after the game. “They’re very freeing. They feel good, they feel loose so it was nice to get them back on.”

The Most Entertaining Team in Baseball entered this game have been undefeated while wearing kilts. Unfortauntely with the 7-2 loss, that is no longer the case, and we have to take that out of our Twitter bio.

This may have been as maginifcent of an entrance as I’ve ever seen. I mean I was a part of the “Stampede Entrance” with the Party Animals during the Spring Series in Mobile, but Wednesday night featured an intro I never thought I’d see in person at a baseball game. Leave it to the Bananas to provide a first.

For their intro, the Nanners were led by none other than head coach Tyler Gillum from the door in center field. But this was no typical intro. The Bananas head coach went full cowboy. He was majestically riding a noble steed onto the field with the team ferciously charging behind him as they entered the field as if they were defending the motherland.

Did our head coach just lead the players onto the field on a horse? Yes, yes he did. pic.twitter.com/GlyUg75fBw

When I was notified during the pregame that Gillum would be leading the way via horse, I imagined they’d take it slow with an imposing walk from center field. Nope. Gillum went full on John Wayne as he led both the team and the horse on the field.

I also have to imagine—as the team was waiting to enter the field from behind the wall, frothing at the mouth to make their entrance—Gillum was having to hold them back like the “HOLD!” scene in Braveheart. Nothing gets the blood pumping like a horse majestically galloping in the outfield before a game.

For the second game in a row, the Nanners put on a Home Run Derby, which is in good taste considering MLB did the same earlier this week. There were no Pete Alonso type dingers, and the Bananas switched things up. This time, the derby featured two pitchers: the incomprable Kyle Luigs and the Seminole junior Davis Hare. They went up against the best hitter in the lineup: Danny Boy Dan Oberst.

Luigs started it off with some struggles at the first station. He rolled over a few self tosses before figuring out he never used his best weapon: his arm. From short center field, Luigs chucked a ball over the right center field wall. It was an interesting wrinkle to the derby. Luigs progressed his way to the BP part of the derby but needed assistance to get there by throwing another ball over the wall, this one from just behind second base. He couldn’t get one out during batting practice, finishing with three total dingers.

Hare was next. He didn’t need to use his arm as he worked his way station to station in the derby setting. In somewhat of a surprise, Hare pulled one over the left field wall to take the lead 4-3.

Oberst rounded it out. He, too, took a minute to get going on the self toss but eventually sent one screaming over the wall. In kilt and all, Oberst moved easily through the derby stations. He finally got to the BP. It was down to the wire. He needed just one dinger to tie the leader in Hare.

On Oberst’s third-to-last swing, the West Georgia product tied it up with a shot to left. He almost got another one on his final swing but this derby ended in a tie 4-4, as did last week’s.

Tough Luck Despite the Kilts

It was a tough loss for the Bananas. Though they finished with just two runs on six hits, there’s more than meets the box score. All game long, Banana after Banana sqaured up baseballs that went right to a Blowfish defender. It was like the Blowfish had magnets in their gloves (we should probably get that checked by the CPL). The Bananas hit several balls hard, Livan Reinoso came about five feet shy of going yabbo to literal dead center field.

Missile after missile, the ball just kept finding a Blowfish glove. Jesse Sherrill, who is the fastest man on the field at any given time led the way with two hits. Bill Knight, whose coverage in center field outlasts all cellular networks combined, and Dan Oberst scored the only runs for the Nanners.

Southpaw Ryan Kennedy was on the mound and while he extended his scoreless streak to 27 innings, he gave up two runs in 5.2 innings pitched while striking out four. The Macon pushed across five more runs, including a four-run eighth, against relievers Nathan Detterman and Nolan Daniel.

The Bananas are on the road Thursday night to visit the Macon Bacon at Luther Williams Stadium with first pitch set for 7:00 p.m. ET. They return home Friday night to host the Bacon at Grayson Stadium.