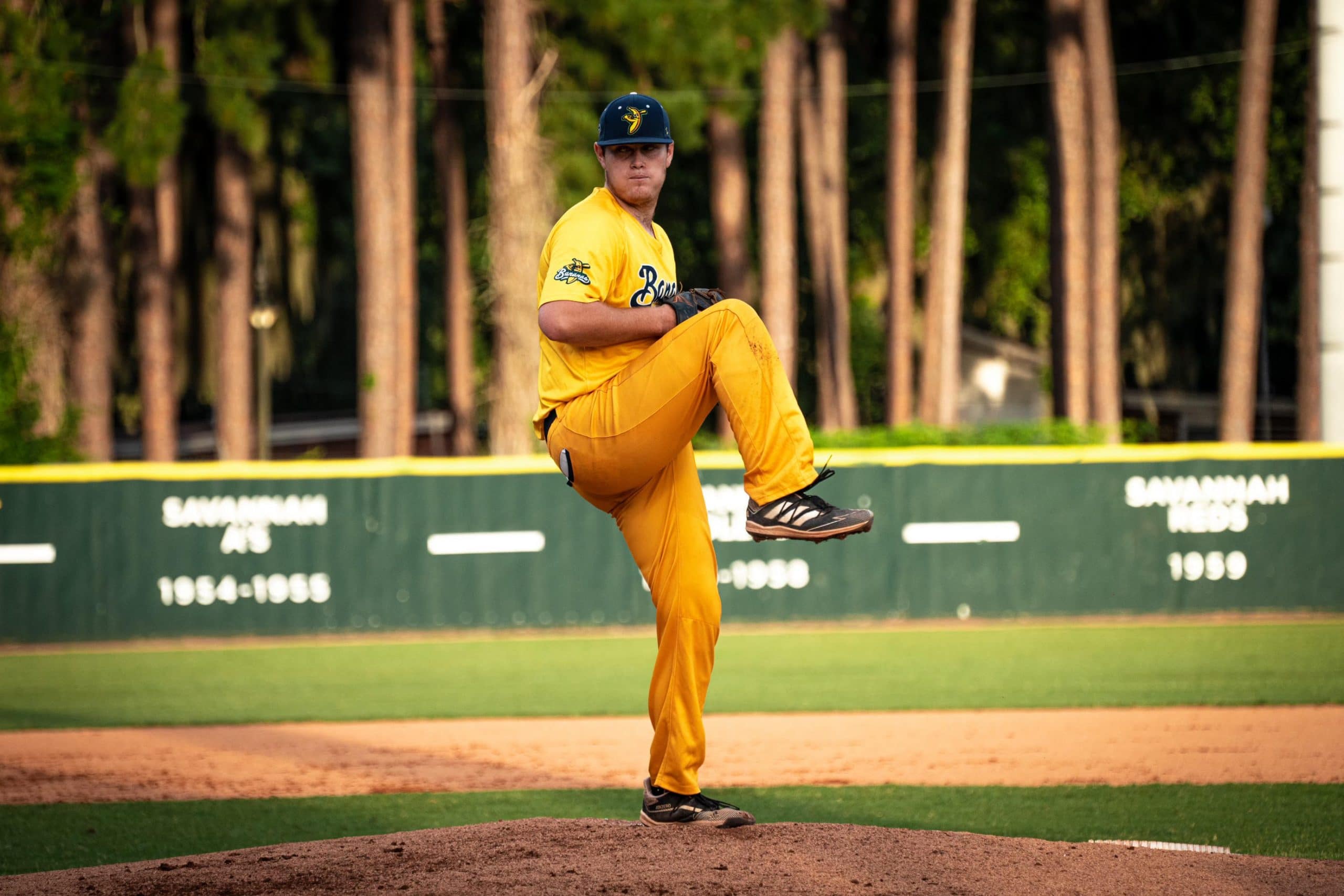 The Savannah Bananas continued their dominance at home by defeating the Lexington County Blowfish, 10-4, at Historic Grayson Stadium on Wednesday night.

It was somewhat quiet up in the press box through the first four innings. At least, there was one topic we weren’t discussing for fear of the baseball gods giving us instant karma. That was because starting pitcher Ryan Kennedy was perfect through four innings. It was sheer dominance from the southpaw on Wednesday night. He was painting the corners like Van Gogh, except Kennedy still has both of his ears. Too soon?

The junior lefty from Kennesaw State finished with a line of 5.2 innings pitched, 3 hits allowed, 3 walks, seven strikeouts and no runs scored. He was dialed in from the jump and it was clear the Blowfish were going to be gasping for air.

No more fish puns, I promise.

“It’s one banana, Michael, what could it cost? 10 dollars?”  Just a little Arrested Development quote for ya. But in this case, it was a $20 banana. One of the many mid-inning events the Bananas put on display Wednesday night included a fan crawling to find a banana while blindfolded. Typically, this takes a while. The crowd is instructed to boo when the fan is far from the banana and cheer when the fan is heading towards it. Being blindfolded, it usually takes fans a while before they are even in the vicinity of the banana.

But this fan, with phenomenal technique and the willpower of Lightning McQueen, may have set a record for how quickly he found this banana. We’ll call Guinness to confirm, but this fan walked away with a crisp 20 thanks to his innate ability to find this banana without the benefit of his eyeballs. Even Tyler, the man in the smooth leopard-print suit (both stylish and comfy), tried to nudge the banana away simply because of the quickness and tenacity this man had when going after the banana.

I mean look at this crawling technique. I wouldn’t be surprised if this guy was one of those prodigy babies that was crawling way before the other babies his age. That’s a thing, right?

Hold the Phone, He’s Got a Cannon!

If only Cotton McKnight and Pepper Brooks were here to witness the absolute rope that Bananas right fielder Cole Kitchen put on display in the top of the fifth inning. I mean we were featured on ESPN. It shouldn’t be long until ESPN 8 “The Ocho” is picking up Bananas games. Take it from a guy who wore a denim jacket to the plate, Banana Ball is right up their alley.

After Kennedy surrendered his first hit of the game in the fifth inning, the Blowfish had runners on first and second. A hard hit ball to right field saw Kitchen, who did a great job gaining ground before getting to the ball, came up ready to put a hole through the pocket of catcher Bill Leroy’s mitt. Being the savvy Banana he is, though, Kitchen knew a perfect one-hop would do the job.

And that it did as Kitchen’s throw, which appeared to have flames coming off the ball, settled nicely into Leroy’s mitt as the catcher tagged out the Blowfish runner with a few steps to give.

Everybody dreams of winning a dance-off. Whether we want to admit it or not, we all want that “White Chicks” moment where we step on the floor and dominate. Dance offs are big in Banana Land and tonight’s turned into an impressive gymnastics routine. Bananas outfielder Ty Jackson looked like he wanted all the smoke busting out the split after a quick twerk sesh. But then the fan is apparently a professional gymnast, who quickly won the crowd’s favor.

A series of cartwheels and flips made it clear who the winner was. How is Ty supposed to compete with that? I mean he doesn’t if we’re being honest. All he can do is twerk it off and take solace in being a fan favorite. I’m just sitting here wondering what happened to the good ‘ol two-step because that’s all I’d be good for.

With the win Wednesday night over the Blowfish and the HiToms losing against the Asheboro Copperheads, the magic number to clinch the first-half in the CPL West division is now one game, officially. That’s right. If the Nanners defeat the Macon Bacon in one of their games on Thursday, they clinch a playoff spot and a home game during the postseason.

The Bananas are on the road Thursday night for a doubleheader against the Macon Bacon with the first game set for a 6:00 p.m. ET first pitch.