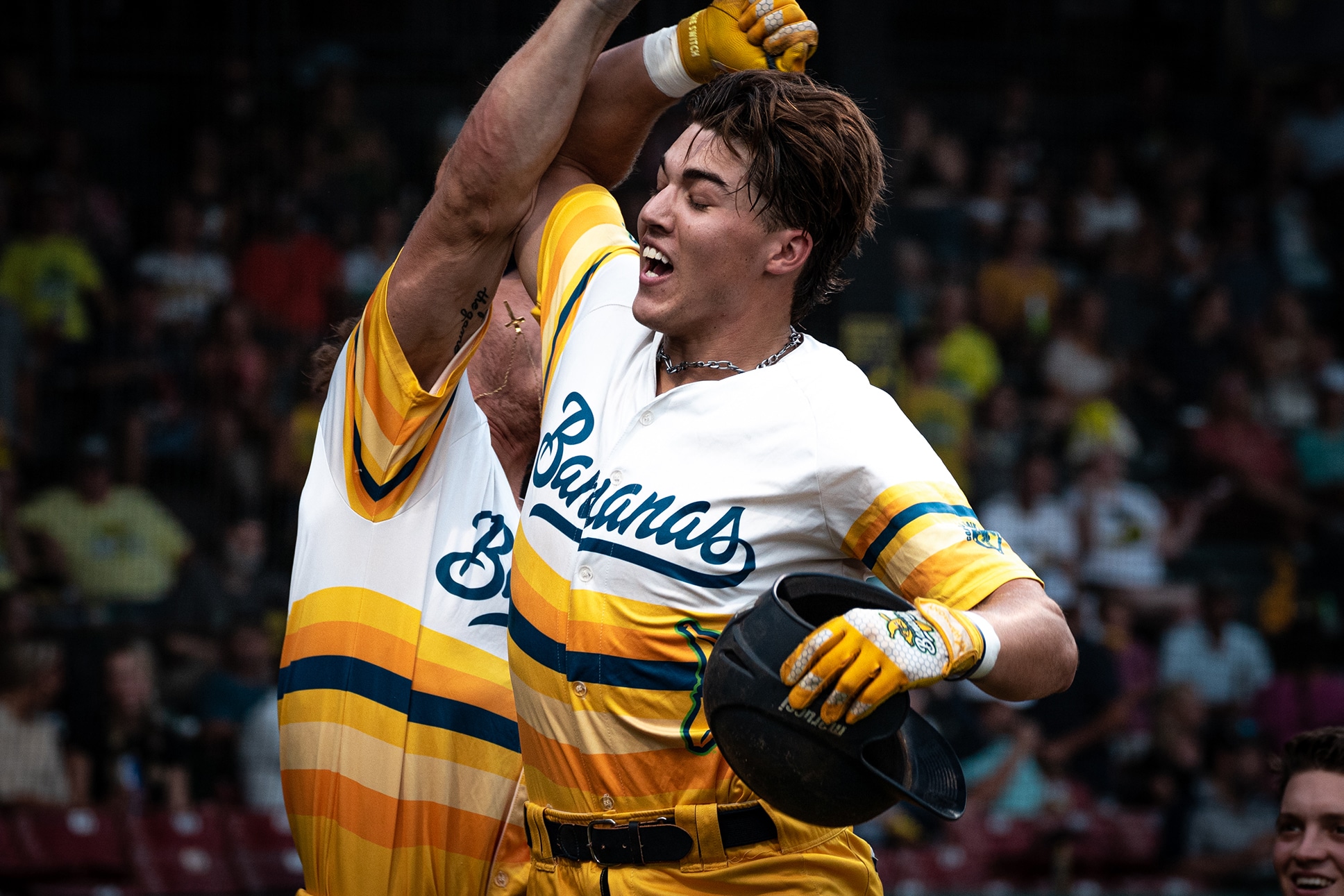 Bear with us as we won’t be blessing you with the usual home game recap from the guy who does it all (play in the Breakfast Bowl, play in the Spring Series, become the Bananas beat writer, skip two games to go to the Bahamas) Kevin Hickey, but we will do our best to get you a summary of what happened at tonight’s game. This Is coming from yours truly, Kara Heater (not in the Bahamas).

The night started strong with the epic pre-game ridiculousness. Grayson Stadium was lucky enough to somehow steer clear of all the predicted rain for the evening (the game is ALWAYS on). With no rain, the game started on time with the strikeout king himself, Joe Miller, on the mound holding it down. It was a quick 1-2-3 inning from the Nanner defense. And boom goes the dynamite.

This leads us into the bottom of the first where the bats got roasty toasty. The first inning went as follows:

Jesse Sherrill walks and then steals second as easy, breezy, and beautiful as a Covergirl.

Eduardo Malinowski rips a single which moves Sherrill to third.

Livan Reinoso hits a sac fly. This brings home Sherrill for run number one on the evening.

After what felt like a 974 pitch at-bat, Bryson Bloomer absolutely destroys a ball over left field for a two-run homer.

Some singing, dancing, and a scoreless second inning take place. Oh, also shoutout to our new director of entertainment, Zach Frongillo who was on the proverbial 1s and 2s tonight. Along comes the third inning which we’ll now deem the “RBI inning”. It went as follows:

Malinowski walks. Cole Kitchen with an RBI single. Bryson Bloomer with an RBI. Ty Jackson with an RBI. Get why we’re calling it the “RBI inning”? Nanners lead 6-0. Boom goes the dynamite. Literally this time.

The unthinkable happened. The power to the entire stadium just cuts out. Straight up someone pulled the cord to this place. The cryo some cannons go off for about two minutes straight, draining all the CO2. The game is put on hold because no one can see. The ghosts of Ted Williams, Babe Ruth, Hank Aaron, and Bob Saget (he’s not even dead) appeared. Out of no-where, lights start shining. But it isn’t the stadium lights, its fans holding their phone flashlights. It was an unexpected, but slightly emotional moment. See the beauty here:

Power just went out in the ballpark. The fans are so electric here that apparently Georgia power thought the fans themselves could power the stadium. pic.twitter.com/Kq3F37XBDU

After about a 20-minute delay filled with many electric dances and banger band performances, Georgia Power said, “let there be light!” You never know what’s going to happen at the ol’ ballpark.

Okay we’re going to make the fourth inning recap in seventeen words. It went as follows:

We should also note that the players and fans started introducing the guys heading to the plate. ‘Twas electric.

We’ve got kids in the stands announcing who’s walking up for our team. Thinking about making this an every game thing since it’s just so darn cute 🥺🥺🥺 pic.twitter.com/3xH7YyFFLt

Spartanburgers score one (booooo). Now fast forward to the bottom of the seventh, which went as follows:

Double from Malinowski. Cole Kitchen announces himself coming up to the plate then hits a shot an earns an RBI. And then guess what happened next? Bryson Bloomer went absolutely bonkers on another ball for a three-run homerun bringing the score to 9-1. The dude was unstoppable tonight.

Bryson Bloomer goes absolute garbanzo beans on a ball straight dead center. We have no others words right now other than: ZOOOWEEMAMA. 9-1 Nanners! pic.twitter.com/3aBr0ZGRAB

The night continued. Many… many…. many more runs were scored. Like four more to be exact. Enough runs to end the game early and bring the 12-run HAVE MERCY *John Stamos/Uncle Jesse voice* rule into play. That means your Bananas are now 31 and 6. *cue the dance*

This is Kara Heater, aka Wendy, signing off. Go Bananas.