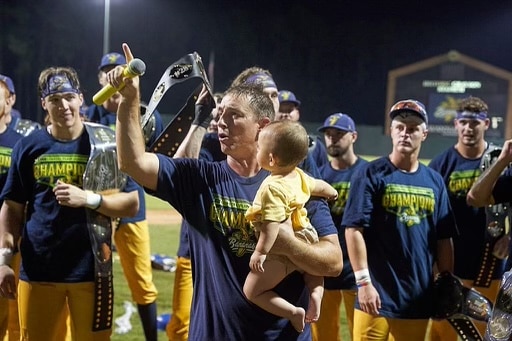 The Savannah Bananas are thrilled to announce that head coach Tyler Gillum will be returning for his fifth year with the Nanners. The Oklahoman has dominated the Coastal Plain League over the past four years, leading the Bananas to a league best 140-56 record over that time period. Gillum led one of the greatest teams in CPL history this past summer, as the 40-10 Bananas took home the franchise’s second ever Petitt Cup Championship. The historic summer ended with Gillum earning coach of the year honors, as the Bananas had a league leading 13 All-CPL selections, including Pitcher of the Year, Joe Miller.

“I’m ecstatic about the opportunity to come back to Bananaland,” Gillum said. “It is a special place to coach summer baseball.”

Tyler is entering his 12th season coaching college baseball, and his 10th at South Mountain Community College in Phoenix, Arizona. He currently serves as the infield, third base coach, and director of player development at SMCC while also assisting in recruiting and hitting. His expertise in baserunning and infield defense has had a major impact in Phoenix and Savannah. The Cougars led the country in stolen bases in 2017 and had the second best fielding percentage in 2018. The Bananas have led the CPL in stolen bases in 3 out of his 4 seasons and have been top 5 in fielding percentage each of the last 3 summers. Gillum brings a lot more to the table than just incredible coaching though, as he’s been integral in the Bananas entertainment and media success as well.

“We are creating the best place to play summer collegiate baseball in the world,” Tyler said. “From development, to the play, to the fan experience, there is nothing like it. I can’t wait to take it to the next level in year five.”

After leading the Bananas through the greatest summer in franchise history, Gillum is already hard at work making sure 2022 is even better.

“We have already started building the roster for 2022. We will have a few returners that the fans will love to see again combined with some new faces that are highly talented and crazy fun people.”

Bananas President, Jared Orton, explained just what it means to have Gillum back in Historic Grayson Stadium.

“Chuck Norris checks his closet every night for Tyler Gillum. His mustache could win a baseball game by itself. The energy he brings to the Bananas could keep the lights on in Savannah for 100 years. This is America’s coach.”

His mustache actually won 11 straight games to start last season, so Jared’s surprisingly selling Gillum short there. As exciting as it was for his wife Danielle to see the success Tyler had with it, I know she wouldn’t be upset if the Nanners don’t repeat the start of season winning streak. We’ll check in with their one-year-old son Camden to hear his thoughts on the matter as soon as he’s made available to the media. Either way, we can’t wait to have the Gillum family back in Savannah for year number five!