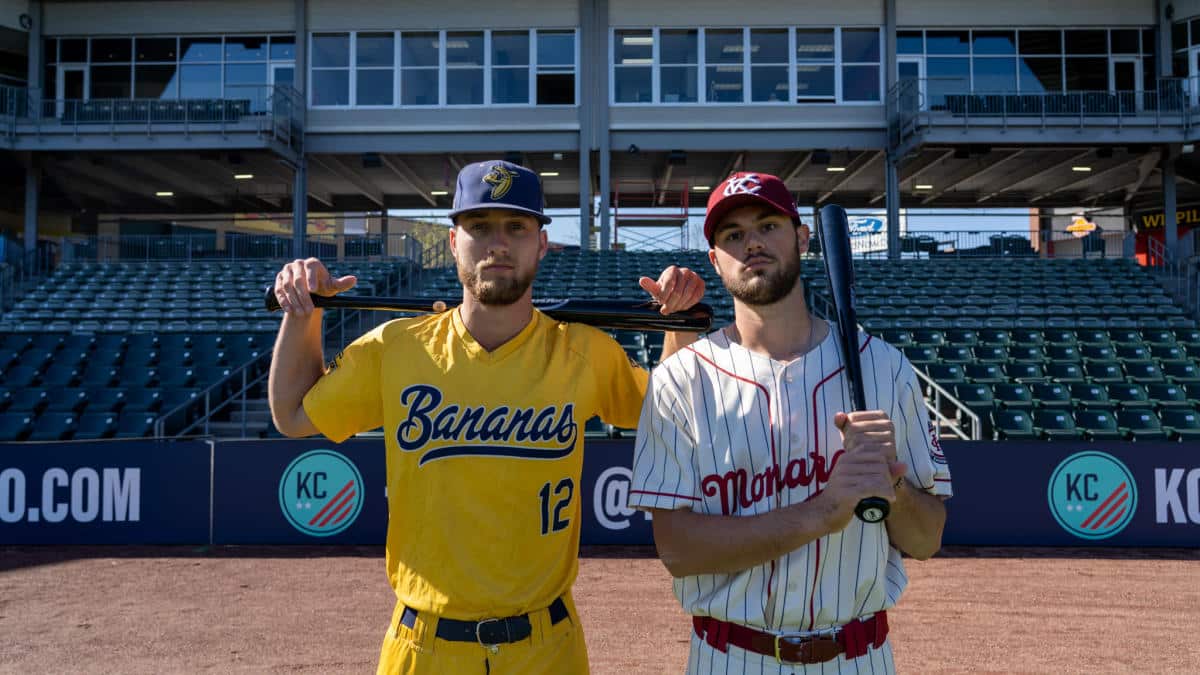 The 2023 Banana Ball World Tour will feature two distinct experiences for fans. The majority of the time the Bananas will be playing their archrival the Party Animals, a team filled with incredible professional ball players who want nothing more than to steal the show. In fact, I’ve gotten a sneak peak at the rosters for both teams and as of now I think the Party Animals are clearly more talented than the Bananas. Juicy to hear, I know, but that’s a topic for a whole ‘nother article. When the Nanners aren’t trying to take down the fellas in black and pink, they will be playing other professional baseball teams in what we call a Challenger Series. The three that I can tell you about right now are all on the road, but there will be many challengers entering the friendly confines of Historic Grayson Stadium as well. There has only been one Challenger Series ever played in Banana Ball history, so there is no better place to start than with the rematch between the Bananas and the Kansas City Monarchs.

The greatest risk of the 2022 Banana Ball World Tour, which was already a grand experiment in itself, was the Nanners taking on the 2021 American Association champion Monarchs. We knew that we wanted to be able to travel around the country taking on the best teams we could find in each spot, but actually putting up a valiant effort in these newfound battles is a key part of that plan. Outside of a Major League Baseball team, the Monarchs posed about as fierce a foe as you could find. They were coming off of a championship season in the American Association, which is right up there with the Atlantic League for the best independent professional baseball league in the country. They boasted a lineup filled with former MLB talent, highlighted by World Series champions Matt Adams and Pete Kozma who were both literally playing Major League Baseball the summer before. And just to add one more level of difficulty, many of the Bananas top players had to report to their independent pro teams for the summer so the roster assembled did not pack the punch it had for the 12 games prior on the tour.

Even with the odds stacked against them, the Nanners roster was still full of terrific players who knew the importance of the two games against the Monarchs and felt like they had something to prove. KC showed their might right out of the gate with a haymaker of a top of the first inning, sending 10 guys to the dish and scoring 6 runs. Luckily for the Bananas, this was a Banana Ball game which meant the disaster start only gave the Monarchs a 1-0 lead in the all-important points category. It was a back-and-forth affair for the rest of the night, with the boys in yellow falling 3-2.

Night two had a very different vibe from the jump, with Christian Dearman striking out three former major leaguers in the top of the first and then Dan Oberst driving in Tanner Thomas in the bottom half to give the Bananas their first lead of the series. It was a back and forth affair from there, highlighted by an RBI single from the skipper himself Eric Byrnes and then a three-run no-doubt blast from the captain Bill LeRoy that helped keep the Bananas in the ballgame. It would be 2-2 heading to the seventh inning with the two-hour time limit nearly complete. At 75-years young, the 14-year MLB veteran Bill Lee came out for the top half and got two groundouts and a fly ball for a 1-2-3 frame. Bill LeRoy got two bases on a sprint in the bottom half, and with two outs 13-year MLB vet Jonny Gomes worked a 3-2 count and earned himself a sprint of his own to drive in LeRoy and win the ballgame. And that is where the series will stand, tied at one-game apiece, until the Nanners and Monarchs faceoff once again next May. 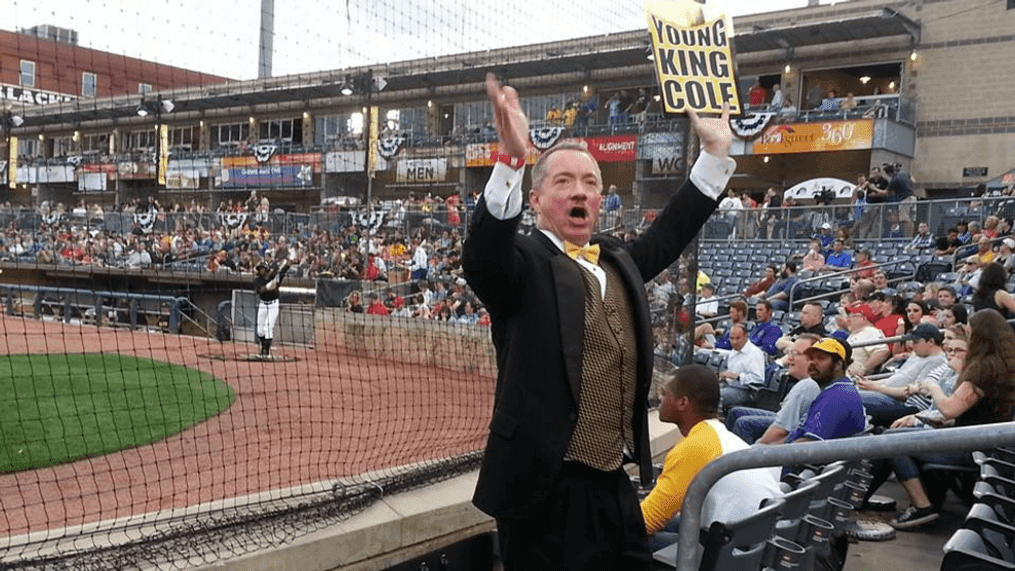 Two weekends before the rematch with the Monarchs, the Bananas will head to Charleston, West Virginia, to take on the Dirty Birds who will be entering their third year in the Atlantic League. If you’re confused as to why I have a picture of a man who’s dressed like he’s either an oil baron or the state’s preeminent steamboat historian, give my last article a quick read where I explained why Rob Blackstone, AKA “Toast Man,” is a big reason Appalachian Power Park made my top 10 most unique ballparks on the tour. On top of the local politician who hurls toast at fans that should not be eaten because obviously you don’t know where that toast has been, they also have a section right behind what will be the Bananas dugout called “Rowdy Alley” where heckling is strongly encouraged. It’s going to be quite a scene in West Virginia’s capital and the competition will be fierce as teams in the Atlantic League are often compared to the top tier of Minor League Baseball as far as the level of play goes. 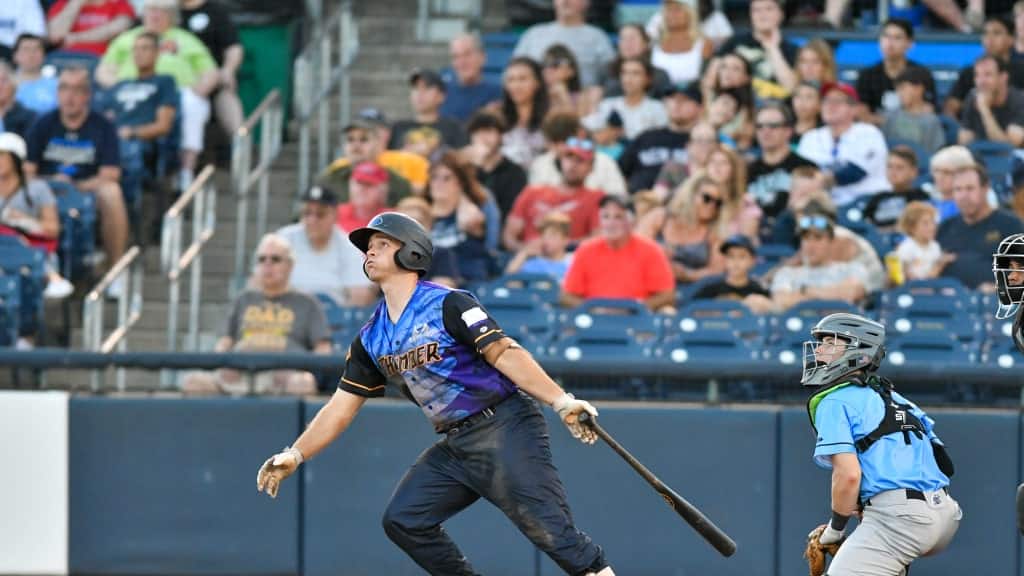 The Thunder play in the MLB Draft League which may be the most interesting baseball league in the country. For the first “half” of the summer it is amateur collegiate baseball, built by Major League Baseball to try and be the premier pipeline for college players hopeful of having their names called in July at the MLB Draft. Then anybody who didn’t get the call to join affiliated ball can stick around and start their pro careers in the Draft League because it becomes an independent professional baseball league after the draft occurs. The collegiate leg is 30 games while the professional team will get 50 games before the playoffs in September. It of course will be the pro version of the Thunder that the Bananas will play against, with the fellas arriving in Trenton right around one month into their professional team’s season.

Those are the three challengers we can talk about at this current juncture. Many more will creep out of the shadows and reveal themselves to the masses in the coming months, and I’ll be waiting in the wings with my fingers giddy to pound away at a keyboard to give Bananas Nation the skinny on what each adversary entails. For now though I am just here to wish you all a merry weekend. Best of luck “falling back” for what may be the last time ever in this here country. Crazy stuff! Happy Biko’s birthday month to all who celebrate and go Phillies!